Brilliant Recent Posts
Friday Big Blue Smurf Blogging: What They Said
You just knew someone was going to do it.
I Can't Believe I H8 the Whole Thing
Oh. Spring training has started? Really?
Dispatch from the "Figure that out all by yourself...
Thursday Weiner Blogging
Word.
Houston, You Have a Problem
Whiteboarding is Abuse, Too.
Wednesday Big Blue Smurf Blogging: What They Said 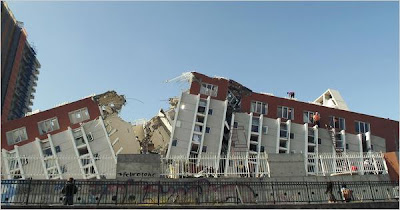 Early this morning, Chile was struck by an unimaginably powerful 8.8 earthquake off its long coast that's estimated to be nearly 65 times more powerful than the 7.1 that flattened Haiti. The only good thing that could be said about this earthquake, which ABC News said could be among the ten worst in recorded history (the worst, not surprisingly, also belongs to Chile when it was flattened by a 9.5 quake a half a century ago), was that it originated 22 miles below the surface and did not do nearly the damage to any major city of the scale of the Haiti quake that completely devastated the capital of Port-au-Prince.

The death toll has now been measured to be 214, which is still far better than the death toll in Haiti (300,00 dead and 1.2 million displaced) but still heartbreaking.

As with Haiti, Chile is a beautiful, lively country rich in natural resources. A thin, pencil-shaped nation renowned for its tin and copper mines, Chile lies on the west coast of South America and rests on a seismic zone. The result of the earthquake is likely to be a tsunami that may be felt over 25% of the entire planet, starting with Asia, Hawaii and even the United States west coast. Here's a link to the Pacific Tsunami Warning Center's website if you live in Hawaii or anywhere in the Pacific. 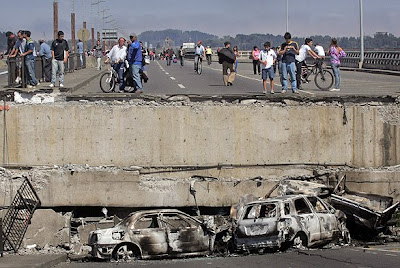 Fortunately for Chile, one enjoying a progressive, democratically-elected government led by President Michele Bachelet, they had a much better infrastructure than Haiti when their turn came and their nation's capitol, Santiago, was relatively spared from the worst (while nonetheless suffering from snapped power lines and power blackouts). But while relief workers may have an easier time getting relief and aid supplies where they're most needed, that doesn't mean they won't need help. The international airport in Santiago has been shut down, meaning that relief agencies will have to scramble to find landing spots and to coordinate with Chilean airline officials and other relief agencies.

To give you an idea of the magnitude of the energy being released off Chile's coast, they've just suffered their 63rd consecutive aftershock and that alone was measured at 5.2 on the Richter scale.

The State Department advises Americans seeking information on family and friends in Chile to contact the Bureau of Consular Affairs at 1-888-407-4747.

So, if you have friends or family in Chile or are reading this from Chile, use that number provided by our State Department to re-establish contact with your loved ones.

Here's a Twitter list of vetted and reputable aid charities committed to helping our brothers and sisters in Chile. Please give what you can. I will donate what I can after I pay my bills on the first.
0 comments