Brilliant Recent Posts
Everything you need to know about Republican hypoc...
More from Cologne - Tuesday morning
The greedmeisters have their knives at the goose's...
Why we can't let Joe Scarborough get away with say...
First photo from Cologne: Cathedral Dom front
Sarkozy Says No To Burqa Wearing in France
Kodak Takes Our Kodachrome Away
Imagine if John McCain were president right now
Goldman Sachs Again; Worse, Worser, Worst, and Pro...
Iran; Fighting for Truth 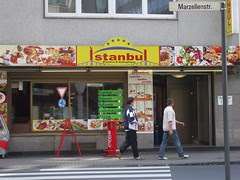 Today was my first day in Cologne as a commuter. In Germany, the trains not only run on time, but they are immaculate. My colleague helped me obtain a week pass from the machine, after which you have to get a card with your name and address on it. Supposedly it's in case you drop or lose your ticket, but it has a peculiar "Where are your papers?" quality to it, until I think about how nice it would be to get my ticket back if I DO lose it. The 8:37 AM train was right on time. The S-line has two classes of accommodation -- first and second. You board the car with the class associated with your ticket -- and no one checks it -- most of the time. But if they do a spot check and you have a second class ticket in a first class car, I don't know if you have to pay the difference or just pay a fine, but nobody does it.

There's something to be said about a society this orderly. We all know what happens when lust for order falls into the wrong hands, but while there are a few homeless people, and a fair amount of public drunkenness, the streets of Cologne are clean, the tracks and station platforms are clean, and the trains are immaculate. The closest thing to disorderliness you see on the train other than a few drunks is graffiti on the railroad crossings.

I didn't get back to Cologne tilll 7:30 PM today after a long day at the office. The Hauptbahnhof has a mammoth food court, with the Americans lined up at Burger King and the Germans picking up sandwiches that look great until you realize that it's all lettuce and käse and some of the most mammoth pastries you will ever see. After perusing the food court for a while with every intention of trying some of the local takeout food, I ended up once again at the Istanbul Pizzeria Kebaphause. If you're ever in Cologne and you're near the Dom, stop by and tell the guys that the short middle-aged lady who can't speak German sent you. I may be ruining things for my co-workers who can sit in a nice restaurant till 10 PM and wake up fresh as a daisy the next day, but tonight there was nothing I wanted more than grilled meat, tzatziki, salad, and feta cheese on flatbread. As I write this, I'm finishing up a #27 Dönerteller, which is doner kebab (gyro), tzatziki, feta, salad, and a kind of mild sauerkraut in a pocket bread that actually holds up to all of this. Take your fine dining, I'll take one of these bad boys (™ Guy Fieri) for four euros any day of the week.

Phil said...
I am so tickled for you!

I have never been out of the states, I have serious concerns about them not letting me back in.....