Brilliant Recent Posts
Top Ten Conservative Books of All Time
Around the Blogroll and Elsewhere: The Philadelp...
So...can Vikram Pandit and John Thain and the rest...
The Ultimate Caption Contest
You know you're immortal when your YouTube video t...
Parsing Blame in the New Old Wild West....
Any asset is worth what someone is willing to pay ...
An article about unannounced layoffs reveals the l...
It's a dirty job but someone had to do it
Do you think they'll do anything other than stonew... 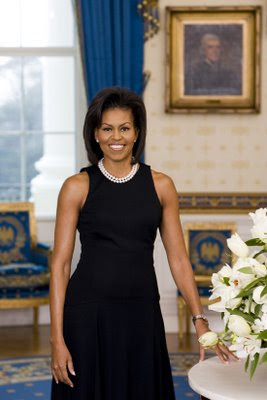 Of all the crap that I've read about Michelle Obama over the last two years, I don't think there's anything crappier, or more ridiculous, than this call for her to cover up her arms. What year is this, anyway? 1909?

I realize that among a certain breed of Christian cultists this: 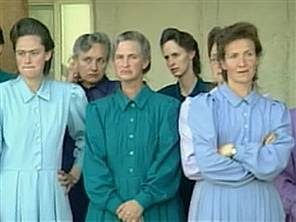 ...is regarded as appropriate attire for women. But when did we get so prudish that a First Lady who wears sleeveless dresses is somehow a Threat to the Established Order of Things®? Doesn't anyone remember this First Lady? 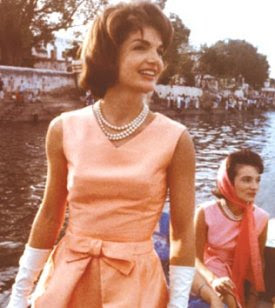 Maureen Dowd, who for once is smitten enough with another female to not do her standard Mean Grrl schtick (perhaps because she knows Michelle Obama could kick her ass from here to Mars and back again without breaking a sweat), finds the foofarah ridiculous:

In the taxi, when I asked David Brooks about her amazing arms, he indicated it was time for her to cover up. “She’s made her point,” he said. “Now she should put away Thunder and Lightning.”

I’d seen the plaint echoed elsewhere. “Someone should tell Michelle to mix up her wardrobe and cover up from time to time,” Sandra McElwaine wrote last week on The Daily Beast.

Washington is a place where people have always been suspect of style and overt sexuality. Too much preening signals that you’re not up late studying cap-and-trade agreements.

David was not smitten by the V-neck, sleeveless eggplant dress Michelle wore at her husband’s address to Congress — the one that caused one Republican congressman to whisper to another, “Babe.”

He said the policy crowd here would consider the dress ostentatious. “Washington is sensually avoidant. The wonks here like brains. She should not be known for her physical presence, for one body part.” David brought up the Obamas’ obsession with their workouts. “Sometimes I think half the reason Obama ran for president is so Michelle would have a platform to show off her biceps.”

During the campaign, there was talk in the Obama ranks that Michelle should stop wearing sleeveless dresses, because her muscles, combined with her potent personality, made her daunting.

Is this yet another manifestation of the right-wing male's terror of strong women? Especially when said strong woman is black, evoking memories of Pam Grier in Foxy Brown? It's odd that it's primarily, but not exclusively, men who are kicking up a fuss, given that there are millions of women in this country who would sell their souls to have the kind of triceps that look good in sleeveless dresses into our forties. So I wonder why there's this big fuss about it being somehow "unseemly" for a First Lady to have sleeveless dresses as a signature look, especially when you consider things like Rich Lowry's delusional "starbursts" after deciding that the image of Sarah Palin on TELEVISION was winking specifically at HIM. In other words, what kind of synapses in the conservative brain make it OK for a MILF with cotton between her ears to have access to the nuclear launch codes, but a gorgeous and smart First Lady who's in great shape is somehow a scandal?

I think it has something to do with the idea conservatives have that the President is supposed to be some kind of national Daddy. This is why they love Ronald Reagan so much -- he was the ultimate Daddy. And if Mommy (which is what Saint Ronnie actually did call his wife) was a bit of a flake, well, she always gazed adoringly at Daddy, and so we knew when we were tucked in at night that all was well. George H.W. Bush was a national Daddy, and God knows no one ever thought of Barbara Bush as a MILF -- probably not even George H.W. himself.

Then came Bill Clinton. I'm convinced that a good part of the reason for the outrage over Clinton's out-there infidelity is because Americans don't want to think about Daddy fucking the baby sitter in his home office. It's useful to note that Hillary-hate only started to wane after the Lewinsky affair. America had never related to her as Mommy until she became the aggrieved wife. And still, conservative America was delighted to have the often abrasive Hillary replaced by Laura Bush the thorazine zombie. With her glazed eyes, Joker-smile, and "knowledge of her place" in the background, she may have been the Mommy who never got out of bed because she was too depressed, but at least she was a Mommy figure -- and a chaste-appearing one at that.

And now we have the Obamas, who are clearly still nuts about each other after twelve years of marriage and two kids. But Michelle Obama is more than just traffic-stoppingly gorgeous -- she works out like a demon and looks more like she belongs in a leather catsuit, roundhouse-kicking bad guys than hosting teas for the Daughters of the Keepers of the Memory of the Glorious War Dead. And I suspect that more than one conservative man gets a few starbursts looking at the strong black woman with the brilliant mind who resides in the White House for the next four years.

And it scares the living daylights out of them.

Bob said...
Ladybird Johnson had two college degrees, bankrolled LBJ's political career, successfully managed the family business affairs, & her "wildflower" campaign turned out to be a subversive advertisement for the nascent environmental movement (I've always wondered if that was her intention). Her training as a "southern belle" taught her how to do all this behind the scenes.

Betty Ford drank out of boredom.

Roslyn Carter annoyed conservatives because her "traditional" Christian marriage was actually a rather enlightened partnership.
3/8/09, 8:28 PM

Lockwood said...
"The wonks here like brains." This is the same BoBo who thought (at least til the repugs got their butts handed to them) that Dubya was a pretty decent guy? Who's nervous that Barack is actually using the brains that "the wonks" ostensibly admire to actually try to solve the myriad problems we're facing? Something smells funny. I don't bother reading Dowd anymore, but after reading that passage, I'd just love Michelle to run for President and win sometime down the road. The streets would be pretty messy from all the essploded heads... but on the upside, there'd be precious little gray matter.
3/8/09, 8:46 PM

The Minstrel Boy said...
the idea that an african american family can obviously and seemingly effortlessly live and embody the real "family" values that the wingers have been stomping and shouting about while hiding their own quiet depravities (foley, craig, vitter, cunningham, the list is truly endless) is driving them fucking nuts right now.

the idea of an african american who is smarter than them, who is more decent than them, who has a family that is together with love and real affection, and would be together if obama was still a community organizer or a constitutional lawyer specializing in taking pro bono cases for underdogs is a living, breathing disputation of all their "one drop" theories, all their justifications of "biologically inferior" and "mentally weak."

Unknown said...
I'm a newcomer to your blog and I just want you to know that it sucks. That's your goal tho, isn't it? Make a nice little sum of money getting people riled up by useless partisan shit like this so they don't do the smart thing and unite against the sellouts in BOTH parties. Why do I have the feeling that you won't touch the Israel question with a 10 foot pole either?

Anonymous said...
We all know where the "snout"
belongs! Up David Brooks ass!

Bless you Jill for getting up
before light and posting the
best news and views in the
morning.
3/9/09, 8:51 AM

Rhode Island Rules said...
Man, I would love to see Michelle in a leather catsuit bringing the hammer down on the asses in Congress who are obstructing progress.

Of course men are afraid of women. That is why we have the backlash of keeping us down. They cannot accept us as equals without feeling lessors.

Sujan Patricia said...
Michelle Obama is heating up DC with her toned arms - often bared and on display in the First Lady’s fearless fashion choices. She often proudly shows her fantastic biceps. Anyone who criticizes Michelle Obama's right to bare arms is jealous of how gorgeous and elegant she is.
4/27/09, 11:44 PM

Prague Paul said...
Michelle Obama is in fact beginning to look in very good shape. Looks like she has been working out a litle bit since she got into the White House. I bet there is a large gym somwehere inside there!
8/13/09, 7:17 PM
Post a Comment
<< Home
Contact
Home
Email:
brilliantatbreakfast at gmail dot com
RSS