Brilliant Recent Posts
Nice try, Tina Brown, but it ain't gonna happen
But....I have nothing to wear!!
By this logic, holding up a bank because you need ...
Isn't this what the National Guard is for?
The father of the contemporary Republican Party
Let's resolve for 2009 to never, ever listen to co...
Why They Hate Us
Perhpas this is why the Bush Administration wants ...
To all those who trampled Jdimytai Damour to death...
When you establish an anti-science environment, th... 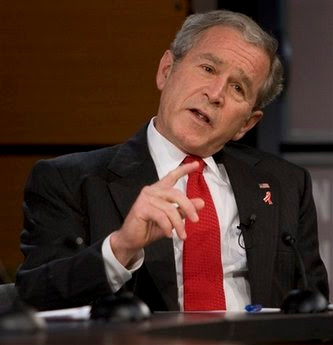 Because sociopaths don't think enough of their fellow humans to feign regret or remorse about fucking over hard-working Americans who were stupid enough to buy into Bush's Ponzi Pyramid-on-stilts scheme by joining his ownership society (as if Americans actually owning something besides 7.8 trillion dollars of debt was a nonexistent concept before the glorious days of George II).

On ABC tonight, George W. Bush said he was "sorry" that Americans are losing their jobs and watching their 401(k) plans get fiendishly rear-ended into the next 12 dimensions thanks to the throbbing fiscal phallus of Friedman and Laffey, free marketeers to whose semen- and feces-slathered altar knelt Harvard MBA George "Fuck Everyone Including the Shareholders" Bush like a love-lorn acolyte.

It seems like only yesterday sometime before the Two Minutes Hate of John Kerry and the Baghdad Gladiatorial Games that was the fault of the CIA that the Bush administration was crowing about creating jobs by the hundreds of thousands and the millions, jobs that were either immediately sacrificed on Uncle Miltie's Mayan altar of free marketeering (aka outsourcing) or were perhaps just low-paying temp and minimum wage jobs.

Now they evaporated just like the Republicans' majority in Congress and their death grip on the White House. From "We have created half a million jobs for the proles according to the Glorious Five Year Plan, comrades!" to Poof, sorry 'bout that. Sorry I don't get no do-overs, that is.

Please, resist the temptation to whine, people. Phil Gramm is out there listening.

OK, you're permitted one whine or a whore-punched-in-the-gut groan after reading this: "On the other hand, the American people got to know that we will safeguard the system. I mean, we're in. And if we need to be in more, we will."

Whatever the fuck that means. The problem is that Bush did safeguard the system because he was "in", so to speak, "in" like a well-hung child molester in a thirteen year-old's snatch . Because the bottom line is the Bush administration's best month at creating jobs still falls short of Bill Clinton's worst month of job growth. (If you get off on reading employment statistics, check out these fairly-up-date numbers on the Bureau of Labor Statistcs' site re job growth under Bush).

But take heart: Bush is the first "president" to preside over greater job growth in the government sector than the private sector.

Bush is like a genial con man with a crocodile tear and a ready handkerchief. He broke into your house while hardly leaving any signs of forced entry, fucked your wife, all three of your daughters, forcing you to watch even during the pimpsticking part of the sado-sexual Olympics, ransacked your mattress of all your money and even took the small wad of ones and fives out of the fucking sugar bowl. In other words, he did exactly what he broke into your home to do.

But at least he has the common human decency to apologize and offer that there fine monogrammed linen handkerchief that, in all likelihood, has your initials on it.

So, Mr. President, would you have invaded Iraq if the CIA had been allowed by Dick "Twister" Cheney to present to you evidence that Saddam, in fact, did not have WMD? (Drum roll, please...)

"You know, that's an interesting question. That is a do-over that I can't do. It's hard for me to speculate... I think I was unprepared for war. In other words, I didn't campaign and say, 'Please vote for me, I'll be able to handle an attack.'"

"Well, let's see: Would I have also buttfucked your 19 year-old, toothless, three legged bulldog outside had I known your bulldog was 19 years-old, toothless and three-legged? Well, lemme think on that for a minute..."

Ladies and gentlemen, I have never in my life, certainly never in my four years of blogging, ever seen so much insanity and untruth packed with the density of a black star into five mere sentences.

So, Bush never used words or dramatic imagery during, say, the 2004 campaign that said in so many words, "Please vote for me, I'll be able to handle an attack"? Well, now, let's take a look at a certain lupine campaign ad from four years ago:

Not only did Bush say in that spot that he could handle a terrorist attack (that's where the wolves come in), but that Kerry and "liberals in Congress" would let the wolves come crashing through our doors on a red carpet.

Then there was the tasteful use of file footage from 9/11 early in the 2004 campaign.

So, Bush is half-right: He never used fear-mongering and the specter of terrorism in 2000 because at that time Bush wasn't even aware that terrorism existed, even after Richard Clarke tried warning the incoming administration and was dismissed as a hair-on-fire alarmist.

Before my brain explodes, let's end with this brilliant observation of the election of Barack Obama:

I think most people voted for Barack Obama because they decided they wanted him to be in their living room for the next four years explaining policy. In other words, they made a conscious choice to put him in as president.

Unlike the obviously unconscious choice to put him in the White House the last two times.

How comforting to know that while our latter-day Rome burns, Bush is spending the last 50 days of his squattage telling everyone all over the world what a great job he'd done and good luck to the next poor bastard who's just beginning to realize how much of our Republic is fully involved.
5 comments

Jill said...
Last night I spent an hour watching Jimmy Smits chew the scenery as a socipathic, murderous Assistant D.A. on Dexter and Michael C. Hall as the sympathetic serial killer. And both of these guys seemed more sane and centered than does the occupant of the White House for the last eight years.
12/2/08, 5:36 AM

Anonymous said...
You may not know this ... but you can give money to help reduce the National Debt held by the American People.

jurassicpork said...
Did you guys ever feel like William Shatner in that Twilight Zone episode? You see the gremlin on the wing of the ship of state yet no one believes you or sees the gremlin?
12/2/08, 8:52 PM

Anonymous said...
So nice you know how everything should be done. Why don't you run the country?
12/7/08, 8:01 PM
Post a Comment
<< Home
Contact
Home
Email:
brilliantatbreakfast at gmail dot com
RSS