Brilliant Recent Posts
How much health care or roads or schools could $14...
Not all Alaskans are lunatic-eyed apocalyptic nut...
This song is dedicated to Sarah Palin and her minions
Connecticut's Questions and the Hidden Agenda Driv...
Op-Ed Titles That Make JP Want to Chug Ipecac and ...
This video is profoundly disturbing
By this logic, Republicans should STFU about Jerem...
If the Senile/Nitwit ticket loses on Tuesday, Sara...
Joltin' Joe
Saturday Night Big Blue Smurf Blogging: What They... 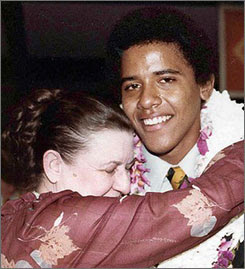 This is just so sad, and such a cruel twist of fate, that Barack Obama's grandmother, Madelyn Dunham, has passed away just hours before voting begins in Dixville Notch. Legacy.com has created a guest book where you can go to extend your condolences.

However complicated Barack Obama's relationship with his grandmother may have been (and who DOESN'T have complicated relationships with their family?), it's clear that she loved her grandson and he loved her back. To lose her today of all days is just heartbreaking.

That of course assumes you have a heart. There are some in this country who do not, like the California Republican Party:

If it wasn't so pitiful, it would be funny. On the day before the election, the California Republican Party has filed a complaint against Barack Obama and his campaign:

Comedy. Did John "Thank God My Wife Owns A Jet" McCain, reimburse anyone after he "suspended" his campaign, yet continued to travel? Did he reimburse anyone for the weekend jaunts to his ranch to wait for his cell phone tower? Is this really the road the GOP wants to go down?

I love the smell of desperation in the morning. It smells like...victory.