Brilliant Recent Posts
Matinee at the Bijou
We shouldn't kid ourselves that the election of Ba...
Proposition H8
Dispatch from the You Can't Make This Shit Up file
Can the Secret Service be relied on to protect Bar...
And ANOTHER Republican lie is debunked
And yet something ELSE the Bush Administration has...
Saturday Rachel Maddow Blogging
If you can't win an election outright, change the ...
Aren't you glad you gave a big fat early Christmas... 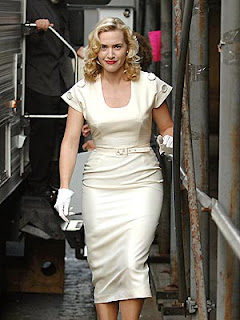 If it's November, it's Oscar® season, and if it's Oscar® season, the chances are pretty good that Kate Winslet is going to be in the thick of it. This year, as in 2004, she's in not one but two Oscar-bait films -- The Reader, directed by Stephen Daldry of The Hours fame, in which she plays a German woman on trial for war crimes, and a film that would be dismissed as a gimmick were it not an adaptation of Richard Yates' "Revolutionary Road", a 1961 novel that is on the Time Magazine "All-Time 100 Novels" list.

The gimmick is that Yates' squabbling couple puts Winslet on screen with Leonardo DiCaprio again, the two of them having decided that a decade has offered sufficient time since That Boat Movie for them to appear on screen again. That they portray a squabbling suburban couple longing to break free from the expectations and roles into which their 1950's timeframe has thrust them by going to Paris gives an added frisson of synchronicity that I have no doubt some of the then-young audience for That Boat Movie will find amusing as they too are now a decade older.

Those of us who were movie buffs were familiar with those two crazy kids long before Titanic came out. DiCaprio had already shown he had The Right Stuff in This Boy's Life and The Basketball Diaries, a terrific film that unfortunately has become identified with the Columbine massacre but that is definitely worth seeing. Winslet was already familiar from Ang Lee's Sense and Sensibility, which combined girlcrush-object-in-training Winslet with the divine girlcrush-object-already Emma Thompson, and threw in the Thinking Woman's Sex Symbol Alan Rickman, and the gorgeous Greg Wise, now better known as Mr. Emma Thompson. But for those who weren't aficionados of even this most mainstream of arthouse flicks, this on-screen pairing was like dynamite. Of course if you were Winslet, and if you were in a movie where you were being forced to marry as bad an actor as Billy Zane, you too would want to run off with the feline-faced DiCaprio, even if he did look fourteen at the time.

But it is ten years later, DiCaprio's career has finally escaped the shadow of the iceberg and he has aged into a credible male star, while Winslet has spent the last decade cranking out masterpiece after masterpiece, so it seems to be time to bring these two most talented actors of their generation together again.

But if it's Winslet Season again, it's time for endless ink to be spilled about her weight.

Why is it that every time this healthy size six is in a movie, she never gets to talk about her character, or what it's like to work with Geoffrey Rush (Quills) or Judi Dench (Iris)? Why doesn't anyone ask her what it's like to play an intense role opposite the star with whom she's most closely identified, a star with whom she's close friends, all rolled together into a film directed by her husband, Sam Mendes? Why is it that every time Kate Winslet is on screen, there is only one topic anyone wants to ask her about -- her figure?

Fametastic (UK): "Kate Winslet: my body isn’t perfect but it’s who I am"

Kate Winslet is a gorgeous 32-year-old who's had two kids, doesn't diet, and doesn't spend her every waking hour working out. She's married to a guy who used to be one of the industry's most notorious serial monogamists and held onto him for seven years. She's had two kids. Most straight women would happily switch teams for her. She's one of the most admired women in show business by other women BECAUSE she's unapologetic about her body, and yet every fucking time she's in a movie, we have to go through this. Is the press going to keep doing this until she has the common decency to become an anorexic, so they can get on her case about that?

When Titanic became a phenomenon, the press all claimed that the audience was teenaged girls who went to see it over and over again because Leonardo DiCaprio was then what Zac Efron is now -- the 'tween dreamboat. I don't know about teenagers, but the women I knew were enthralled by the character that Kate Winslet brought to the screen, a character that she has arguably played to one degree or another in every film in which she's ever starred: a woman trying mightily to find her own way in a society fraught with expectations that just don't fit who she is. For all that James Cameron couldn't write dialogue worth a damn, that much got through.

Perhaps the reason Winslet always plays this kind of character, and does it so well, is that she lives it every day of her career. In a world that demands its women be so thin that they might as well disappear, Kate Winslet dares to take up space.

In the majority of human existence the full figured woman was the most admired and idealized. The current fad for the svelte (towards the anorexic) will eventually fade.
11/16/08, 2:50 PM

D. said...
She looks...womanly. She has curves. She would probably give Jennifer Lopez competition in the booty department.

crabbyanne said...
I agree with you, it's ridiculous. Apparently any actress who isn't anorexic is "fat". Did you see her cover on Vanity Fair? They made her look totally unlike herself, sort of homogenized. It was really disappointing.
11/16/08, 9:55 PM

I love Kate Winslet, too (especially in Eternal Sunshine of the Spotless Mind)!

Wondering if you saw this article on Star IQ, an interpretation of her astrology chart? It talks about some of the same themes you mention in your post -- thought you might enjoy it:

Anonymous said...
The Vanity Fair couldn't even leave her face alone; they turned her into a clone of Catherine Deneuve. Winslet is a beauty in her own right!!
11/17/08, 2:28 PM

Anonymous said...
I'm surprised you didn't mention one of her first roles, the disturbing and brilliant Juliet in the movie Heavenly Creatures. For my money, she was so much better in that than in the (incredibly badly written and ahistorical) Big Boat movie.
11/17/08, 2:56 PM

Anonymous said...
First and foremost, she is a terrific actor. It should end there.
However, Kate Winslet is the poster-woman for what is wrong with the media, vis-a-vis female bodies. She happens to be beautiful (all-time beautiful IMHO), so her looks get talked about. Fine. But to suggest that she is unhealthy, fat, unattractive, whatever, because if her size is really, really perverse. And dangerous.
11/17/08, 5:11 PM

Jill said...
Hermione, the Catherine Deneuve thing was intentional; it was the theme of the photo shoot.

Funny how there's so much outrage about this photo shoot when there isn't a magazine photo or cover of a woman you will ever see that isn't airbrushed.
11/17/08, 7:16 PM

Rhode Island Rules said...
I should be so fat. It has truly gotten more dangerous out here to be female. They want us to disappear if at all possible.
Who they, though? Most men like their women with curves, they don't want to sleep with a bag of coat hangers unless they themselves are so image conscious.

Sorry, I am not going to kill myself to be some icon for your devotion. I am going to enjoy my life while I am here.

Maybe that is what we need to teach our youngsters, that the majority (not all) of "stars" are actually neurotic, needy creatures who have no "self" so they need to seek the approval of others and disappear into role playing. It is not a healthy way to live. I acknowledge that if you can kick and scratch your way to the top it is a lucrative way to live, but at what expense?
11/17/08, 8:10 PM