Brilliant Recent Posts
Thomas Friedman is starting to sound like one o'th...
Swiftboating Goes Mainstream
God is My Hitman.
Condolences to TBogg
"First they outsourced IT, and I said nothing beca...
Az di bobe volt gehat beytsim volt zi geven mayn z...
The presumptuousness of John McCain
Another dispatch from the "Figure that out all by ...
Lowered Expectations
I'm no Marc Maron, but I'll do in a pinch 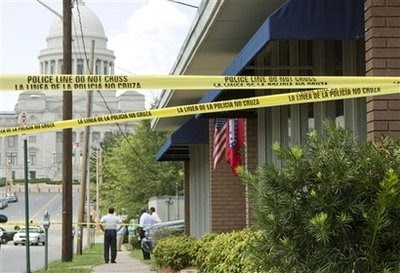 Sometimes right wingers can’t wait for God to get around to doing their dirty work for them so they do things according to their busy schedule.

According to the NY Times:

Bill Gwatney, the chairman of the Arkansas Democratic party, was shot and critically wounded in his office in Little Rock Wednesday morning, police officials said.

The officials said a single gunman fired three shots at Mr. Gwatney, a former state legislator, in his office a few blocks from the state Capitol and then drove away.

A friend of the Gwatney family, who asked not to be identified, said Mr. Gwatney was near death at the medical center of the University of Arkansas for Medical Sciences, and that doctors considered his wound inoperable. 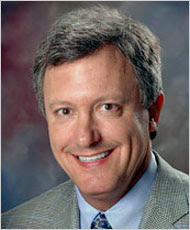 The article doesn’t go on to say whether Mr. Gwatney, who is also a super delegate, pledged support for either Barack Obama or Hillary Clinton but the Arkansas superdelegate list shows that he’d endorsed Hillary Clinton earlier this year.

That would at least seem to indicate that this wasn’t Obama-related.

Why did this as unnamed assailant shoot Mr. Gwatney three times, perhaps fatally? We’ll likely never know the exact reasons but I’m going to break from tradition and assume that this was a right winger before the facts start coming in. Because whenever something like this happens and I hang back out of fairness, it’s always shown that a conservative was behind it. As with the Unitarian church shooting in Tennessee earlier this summer.

But since Hillary’s now out of the race, with nothing but fast-fading hopes of getting into an Obama administration, this shooting doesn’t make any sense. But if this guy that the Arkansas police killed was a right winger as I suspect, don’t expect much sense to emerge outside of a four page manifesto written in blood, feces and crayon.

Update: The same article from the NY Times informs us that Mr. Gwatney just passed away. Deepest condolences go out to his family. Is the partisan divide really this deep?
4 comments

EnigmatiCore said...
"We’ll likely never know the exact reasons but I’m going to break from tradition and assume that this was a right winger before the facts start coming in"

Traditions sometimes exist because they are good ideas, meant to protect those who follow them from doing things they might or should regret.

It looks like the reason behind this is that the guy was fired or laid-off from a car dealership owned by Gwatney.
8/13/08, 6:38 PM

Anonymous said...
Kudos for a sharply written comment, enigmaticore-- however, the NYT article states that it's been confirmed that the killer had never been employed by Gwatney or his car dealerships.

Sure, any number of possible presumptions, etc.

The main thing is that a man who apparently devoted his life to public service has been cut down while doing his work, by someone who'd been taken over by one sort of madness or another, and we may never know the story, but there are people who knew him now struggling with the loss, and the situation is as sad as the human drama gets.
8/14/08, 1:27 AM

Anonymous said...
Why did this as unnamed assailant shoot Mr. Gwatney three times, perhaps fatally? We’ll likely never know the exact reasons but I’m going to break from tradition and assume that this was a right winger before the facts start coming in. Because whenever something like this happens and I hang back out of fairness, it’s always shown that a conservative was behind it. As with the Unitarian church shooting in Tennessee earlier this summer.

jurassicpork said...
OK, so riddle me this, Batman: After this bird lost his job, how come he didn't go after the Republican state party chairman? Why Gwatney?
8/14/08, 6:25 PM
Post a Comment
<< Home
Contact
Home
Email:
brilliantatbreakfast at gmail dot com
RSS