Brilliant Recent Posts
Where the heck was this guy four years ago?
Cheetohs this, you nepotism-careered moron
John McCain's health care plan
Meanwhile, in the Caribbean...
You too, Bill.
Nice. VERY nice.
Back-Pedaling We Can Believe In
If that's what's going on at MSNBC, I think these ...
Chris Matthews Rubber Room Watch, Day One
Gee, if she'd been like this during the primaries ...

I wonder if the MSM are going to go out this far on a limb next week when the Republicans party as New Orleans gets hit by a hurricane again.

Barack Obama will take a significant political risk tonight when he accepts the Democratic nomination for president in a 76,000-seat stadium on a stage set with faux-Greek columns, accompanied by a cast of world-famous pop stars and fireworks.

The white-washed plywood columns in particular became the fodder for much merriment yesterday, as aerial photos of the stage set made them look like a papier-mache Acropolis.

And workers put the finishing touches on the backdrop: faux columns intended to suggest a federal building in Washington and create an air of stateliness. (The McCain campaign named it the Temple of Obama, a label repeated by some commentators.)

But there is something coming Thursday night that, to my mind, is a blunder big enough to warrant the criticism: the Greek columns on the stage of The Invesco Field where Obama is to give his acceptance speech.

Or are they Roman columns? Perhaps an art historian will join the Best Political Team on Television so CNN viewers can differentiate.

Even the Times Online in the U.K. gets in on the fun:

An elaborate stage — with white columns designed to resemble a classical Greek temple or the White House — has been built for his speech accepting the Democratic presidential nomination.

Critics seized on this as fresh evidence of a self-regard bordering on arrogance — the downfall of many an Ancient Greek hero — that had already been demonstrated by the faux presidential seal used briefly to decorate his podium this summer. Such is the sensitivity of the Obama campaign that it began circulating reports showing that President Bush had also used classical columns at his convention four years ago.

I will be at my soon-to-be-former job today, wrapping up projects and making sure my desk is cleaned out and I'm leaving nothing behind and talking to co-workers and shedding buckets of tears before going in tomorrow, getting 4000 signatures to make sure I'm not leaving with anything I shouldn't be, turning in my ID badge, and joining the ranks of Casualties of George W. Bush's America. But I'm quite certain that Joe Scarborough and the Fox News Bots and Campbell Brown on CNN and all the other Idiots of the Media are going to be talking all day about Barack Obama's Giant Phallic........columns.

Kudos go to Kossack "Michael D" to point out that the columned backdrop against which Obama will give his acceptance speech tonight is not about a Greek temple, or a Roman temple.

It's about the place on the steps of which the Rev. Dr. Martin Luther King gave his "I have a Dream" Speech 45 years ago today:

And what is that place? The Lincoln Memorial: 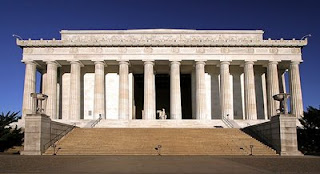 ....which, as you can see, has columns. It's also the LINCOLN Memorial. Lincoln was from Illinois. So is Obama.

Now, why is it so difficult for the Obama campaign, and other Democratic spokespeople, to point this out, instead of trying to jump through hoops in a vain attempt to avoid the inevitable?

You should be sure to click the link to the post at Le Grand Orange, because the diarist also takes a tour through Great Moments in Republican Use of Columns History, for our edification and enjoyment. Somehow I don't think Joe Scarborough is going to care. After all, why let reality get in the way of a good meme?
4 comments

Anonymous said...
I've largely been ignoring the convention coverage. So that's what the column thing is? Sheesh, the pundits sure are idiots. Thank you explaning the connection to the Lincoln Memorial, Illinois, and Dr. Martin Luther King, Jr. I agree that the Democrats should be shouting this from the hilltops. Why is the leadership sooooooooooo afraid of being BOLD?
PurpleGirl
8/28/08, 9:07 AM

zeek said...
Well, BHO isn't really that Black so it really is presumptious of him to assume the mantle of MLK, isn't it?

I keed. Thanks for the explanation. I haven't been paying enough attention.

Anonymous said...
Susan Jacoby has written a book called The Age of American Unreason. She writes about the ignorance in the country and you can see it in the media. The MSM has become part of the story, instead of covering it.
The usual refrain: Obama has no details. We don't know him.
BTW, the Clintons did what they did because of the campaign debt. The money dried up in June and there is a deadline to pay off the debt.
Within a month one or the other will pull a nasty.
I will be thinking of you as you leave your job.
Maude
8/28/08, 1:43 PM
Post a Comment
<< Home
Contact
Home
Email:
brilliantatbreakfast at gmail dot com
RSS