Brilliant Recent Posts
Adieu to the Court Jester...
Karl Rove skips the country
Of course they do, because for them, anyone to the...
Fear of the Black Woman
John McCain should like this, he likes to make jok...
These people are absolutely fucking useless
Not with a bang but with a whimper
Presidential Penis Prevails, Senate's Face Red Onc...
If it's going to be wrecked anyway, let's party li...
Or what? Or we shall taunt you a second time?


And what difference does it make?
Posted by Jill | 8:43 PM
You'd think, after John F. Kennedy became president and the Pope didn't end up ruling America, that we'd be over this notion that a president's religion meant he was a theocrat. Of course, we're living in a country where a bunch of U.S. Senators held a session that named the Rev. Sun Myung Moon as the Messiah, but it's funny....no one in the mainstream media ever uttered a peep about that. We're also living in a country in which John McCain, adulterer and bigamist, can suck up to the Christofascist Zombie Brigade by announcing his opposition to gay Americans being allowed by adopt children thusly: “I think that we’ve proven that both parents are important in the success of a family so, no, I don’t believe in gay adoption,” -- and the mainstream media utters nary a peep about where a guy like this gets off being so holier-than-thou about "both parents" after leaving his wife for a younger, prettier one with a hundred million smackers to boot.

Funny how no one's digging into what John McCain thinks about God; it's as off-limits as any question about whether being shot down makes him a hero, or just unfortunate. But it's becoming increasingly clear that it doesn't matter how often Barack Obama goes to church, or what he believes about Jehovah, the Great White Alpha Male in the Sky who micromanages people's lives and who, well....ah, the heck with it -- let's just let Uncle George point out how ridiculous it is that the issue of Barack Obama and religion just doesn't seem to go away, not even after the week John McCain had.

Of course, this is the country where it seems to be perfectly okay to present Barack Obama and his wife on a magazine cover like this: 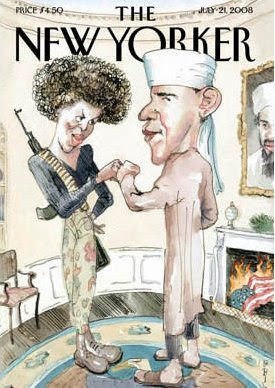 ...so it's no wonder that we keep seeing story after story after story questioning what Obama believes. It's sort of like the way "terrorist fist jab" stayed in the public consciousness, the better to link the word "terrorist" with the name "Obama". It's sort of like the way the media have kept harping on Jesse Jackson's fantasies of emasculating Barack Obama -- the better to link Obama to the ferociously unpopular Jackson. It doesn't matter that Jackson simply looks like a bitter (heh) old jealous man, the point is to link the two men together in the public consciousness and feed the Fear of a Black Planet if Barack Obama is elected.

And it's working. The latest polls have Obama and McCain in a statistical dead heat, which ought to boggle the mind. A major mortgage lender went belly-up on Friday in the second biggest bank failure in U.S. history, and Freddie Mac and Fannie Mae may require a %5 TRILLION bailout. And oh, yeah -- Condi says that Israel trumps everything, and we'll attack Iran if they attack Israel...preferably before the election, because like everything else, global thermonuclear war helps John McCain.

And yet, the most important story, in the eyes of the mainstream media, is STILL whether Barack Obama loves the baby Jeebus enough to satisfy Chris Matthews.

Anonymous said...
The "Terrorist Fist Jab" should stay in the public consciousness for the plain and simple reason that is reveals how incredibly biased Fox News can be.

And the fact that the New Yorker included the Fist Jab heard around the world on the cover seems to tell me that it was a satirical attack against those who continue to falsely claim that Obama is some sort of Muslim terrorist in Christian clothing that will snap and become the next "Manchurian Candidate".

Unfortunately, many people won't "get it". However, those who don't get the satire are unlikely to be Obama supporters anyway.
7/14/08, 11:12 PM