Brilliant Recent Posts
Last thought of the evening
What, Brian Williams didn't fellate Lindsey Graham...
Could you pass the citizenship test?
Around the Blogroll and Elsewhere: Special 4th Am...
Saturday Night Music Blogging
How dare your needs get in the way of Saint Maveri...
No, Senator Obama, the Constitution is NOT Negotiable
Friday Big Blue Smurf Blogging: What They Said
Being a WATB: It isn't just for wingnuts anymore
The Republican Dream Society


Oh, God...no
Posted by Jill | 6:01 AM
That's what just came out of my mouth upon reading just now that George Carlin has died:

George Carlin, the Grammy-Award winning standup comedian and actor who was hailed for his irreverent social commentary, poignant observations of the absurdities of everyday life and language, and groundbreaking routines like “Seven Words You Can Never Say on Television,” died in Santa Monica, Calif., on Sunday, according to his publicist, Jeff Abraham. He was 71.

The cause of death was heart failure. Mr. Carlin, who had a history of heart problems, went into the hospital on Sunday afternoon after complaining of heart trouble. The comedian had worked last weekend at The Orleans in Las Vegas.

Recently, Mr. Carlin was named the recipient of the Mark Twain Prize for American Humor. He was to receive the award at the Kennedy Center in November. “In his lengthy career as a comedian, writer, and actor, George Carlin has not only made us laugh, but he makes us think,” said Stephen A. Schwarzman, the Kennedy Center chairman. “His influence on the next generation of comics has been far-reaching.”

In recent years, Carlin just hadn't been as funny as he used to be. I suppose one can't have as finely honed a shit detector as he had, and use it so expertly for so many years, and have much of it left after the last eight years of the Bush Administration. But no one cut through the bullshit of modern life the way Carlin did.

There's so much of Carlin's work that's embedded itself into my brain. Just last week I was talking to a co-worker about Carlin's famous "football vs. baseball" musings:

And I can't tell you how many times I've looked for an audio of the "Heaven, Hell, Purgatory and Limbo" sketch from Class Clown, in which a kid tries to come up with the most outlandish scenario under which not receiving Communion wouldn't be a sin as being emblematic of the pretzels into which Republicans like David Vitter and other sex perverts of the conservative variety twist themselves to justify their behavior, using their religion to do so.

Carlin's job was to expose the hypocrisy, the venality, the complete and utter horseshit of modern life. And he did so fearlessly. Here he takes on western religion, and skewers it to death:

There's so much more -- so much that if I embed it all here, you'll be able to go out for a gourmet meal waiting for the site to load. So just go here and pick a sketch...any sketch.

And now, here we are, living in a world in which David Broder says it doesn't matter how much of a fucking hypocrite and liar John McCain is, because he's established a reputation as a man who says what he believes -- even though much of what he says today flies in the face of what he's said in the past. We're living in a world in which a GOP candidate who dumped his injured wife to marry a blonde heiress and has eight houses is a common man of the people and the guy who was raised by a single mom and went to college on scholarships is an elitist. We're living in a world in which John Bolton goes on Faux Noise and says that the Israelis will do our bidding and attack Iran between the election and the inauguration and "Arab states will be delighted" that Iran's nuclear capability will be destroyed. We're living in a world in which idiots believe e-mails they receive claiming that the black guy is a secret Muslim and don't even try to reconcile it with their own fear of the Scary Black Guy™ who used to be in the pulpit of his CHURCH. A world where a major news anchor whines because it's so UNFAIR that the Democratic candidate can raise enough money that he doesn't have to take federal matching funds. A world where George Carlin used to be to remind us of why our leaders are so bad:

We're living in a world of hypocrites, idiots, thieves, and morons -- and now we don't even have George Carlin to poke fun at them any more. We don't have Richard Pryor around to provide much-needed commentary on the race issues in this year's election. And while he's alive and well and living in Los Angeles, we don't even really have Marc Maron around anymore if you live east of the Grand Canyon and can't fly to the west coast to go to comedy clubs.

And somehow I think that George Carlin, whom I would argue had a lot more cultural impact than Tim Russert did, will merit about thirty seconds on the evening newscast.

And because I can't resist: 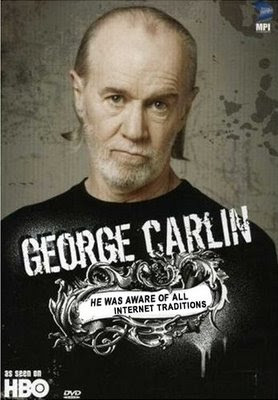 OMGSeriously said...
He might've said wtf Oh who lol. awww man I really almost cried watching first look on msnbc about 5:30 this morning and heard he died....I paused and stared at the tv for like 2 mins. totally blank....all the awesome people are dying off lately...smh.
6/23/08, 10:47 AM

Jersey Guy said...
Carlin himself said it best (as quoted in the N. Y. Times obit):

“I don’t have pet peeves, I have major, psychotic hatreds.”

A voice that we can ill-afford to lose. He will be missed.

Derek said...
A huge goddamned loss. The man was (and is) one of my few creative idols. It is now up to the rest of us to "call bullshit" in the Carlin tradition, even if we're not as funny as he was (indeed, very few are).

The brilliant Carlin lines are too numerous to possibly recount at once. I blogged a few, but as you indicate, one could go on all day. I don't know why this one happened to just come to my mind:

"Now we have those yellow signs, those goddamn yellow signs, have you seen those? BABY ON BOARD? ...I don't know what yuppie douchebag thought up that one, but man...

BABY ON BOARD. CHILD IN CAR. You know what they're saying with those, don't you? They're saying,'I know you're normally a shitty driver, but because my child is present I expect you to straighten up and be extra careful for once.' You know what I do? I run 'em into a tree. Run 'em right into a fucking tree! Bounce that kid around a little bit, give him a sense of reality!"
6/23/08, 5:37 PM

Anonymous said...
Sad day, indeed.
I saw the clip that Gill (Hi, Hack) posted on her blog and how ironic that he said,"May God strike me dead".

I can imagine what he would be saying if there is a God, afterall.:D But no word, yet.

Derek...funny. I laughed out loud about the yellow signs. Nice one

Distributorcap said...
most of the media hated carlin --- or just ignored --

saint tim was one of theirs.