Brilliant Recent Posts
Do you trust people to keep you safe who admit the...
I swear, you couldn't Photoshop this
"Arrogant" -- just another word for "uppity"
Liberals are more creative than conservatives
If Republicans can't win fair and square, they'll ...
Barack Obama on how you do not support the troops ...
About that "judgment" thing....
Dream Team or Nightmare?
Random thoughts
I don't care if Hillary Clinton is "really" a raci... 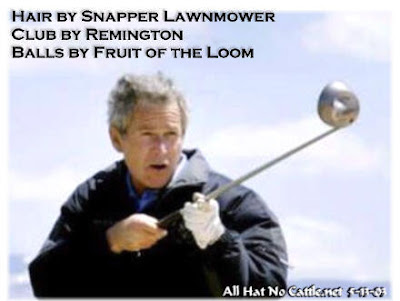 In an interview with Politico and Yahoo News, George W. Bush showed us what a sacrificial kinda guy he is. He admitted, after blaming our intelligence community yet again for the intel that got us into Iraq (and what faulty intel, one might ask, is keeping us in there since it's admittedly turned into a Swedish clusterfuck?), that he gave up playing golf in honor of the troops that he’d doomed to death.

It only took him until August 2003, when the UN HQ in Baghdad got bombed, killing Sergio Vieira de Mello, a high-ranking UN official. He couldn’t even lie and say that he gave up golf for the 270 or so troops who‘d been killed by the time of the August 19, 2003 bombing. It was over de Mello’s assassination.

Here’s Bush’s answer to a question spoondfed to him by Mike Allen, who asked him if his not playing golf since 2003 had anything to do with Iraq.:

I don't want some mom whose son may have recently died to see the commander in chief playing golf. I feel I owe it to the families to be in solidarity as best as I can with them. And I think playing golf during a war just sends the wrong signal… I remember when de Mello, who was at the U.N., got killed in Baghdad as a result of these murderers taking this good man's life. I was playing golf -- I think I was in central Texas -- and they pulled me off the golf course and I said, 'It's just not worth it anymore to do.'

Gee, what a fortuitous guess on Allen’s part, getting right to the heart of the matter with his intuition. And, gee, what a guy, caring about how he looks while driving the ship of state over the cliff.

Such as this tender moment while Hurricane Katrina was busy ripping up the Gulf Coast: 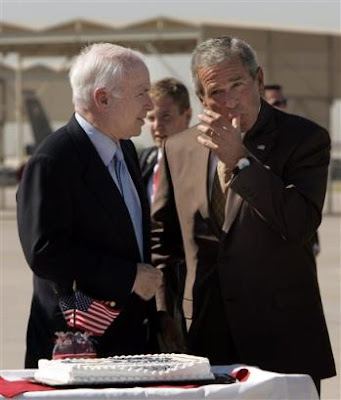 Luckily, Dear Leader ain’t obsessed with appearances, such as when he drove past grieving mother Cindy Sheehan, throwing up dust in her face as she stood in a drainage ditch, on the way to yet another GOP fundraiser. You know, keeping up appearances for grieving war mothers like that. 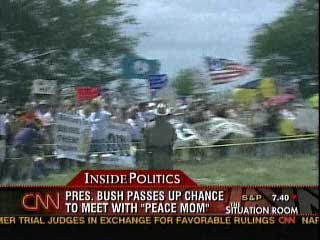 But banning photographers while you’re playing golf in order to look more reverent than you are isn’t quitting. It’s just being sneaky and dishonest, which are two words that perfectly, if euphemistically, describe this administration from start to bloody finish.

So, the next time we see Bush playing golf, that’ll mean the war’s over. Right?
3 comments

the idiocy from this complete sociopath and subhuman drek is just amazing......

Kevin Hayden said...
If only he'd stopped letting Cheney put his putter up his ass, maybe his brains wouldn't have been punctured so badly.
5/14/08, 1:58 AM

missy said...
He probably gave up golf because he sucked at it.
5/14/08, 12:49 PM
Post a Comment
<< Home
Contact
Home
Email:
brilliantatbreakfast at gmail dot com
RSS