Brilliant Recent Posts
"Flu-like symptoms"
Murder Inc. [by spreadsheet]
Does this look like an audience for a guy polling ...
Then do us all a favor and step down
Rudy Giuliani scares the bejeezus out of even cons...
This ought to be the final nail in the coffin of l...
And with this one statement, Nancy Pelosi shows sh...
My, They Learn Quickly, Don’t They?
Let’s drink to the hard working people
Here's my problem with Barack Obama 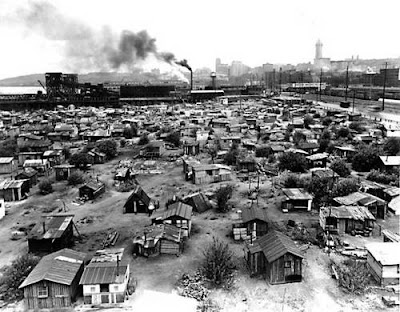 Tent city in suburbs is cost of U.S. home crisis

Between railroad tracks and beneath the roar of departing planes sits "tent city," a terminus for homeless people. It is not, as might be expected, in a blighted city center, but in the once-booming suburbia of Southern California.

The noisy, dusty camp sprang up in July with 20 residents and now numbers 200 people, including several children, growing as this region east of Los Angeles has been hit by the U.S. housing crisis.

The unraveling of the region known as the Inland Empire reads like a 21st century version of "The Grapes of Wrath," John Steinbeck's novel about families driven from their lands by the Great Depression.

As more families throw in the towel and head to foreclosure here and across the nation, the social costs of collapse are adding up in the form of higher rates of homelessness, crime and even disease.

While no current residents claim to be victims of foreclosure, all agree that tent city is a symptom of the wider economic downturn. And it's just a matter of time before foreclosed families end up at tent city, local housing experts say.

"They don't hit the streets immediately," said activist Jane Mercer. Most families can find transitional housing in a motel or with friends before turning to charity or the streets. "They only hit tent city when they really bottom out."

Steve, 50, who declined to give his last name, moved to tent city four months ago. He gets social security payments, but cannot work and said rents are too high.
"House prices are going down, but the rentals are sky-high," said Steve. "If it wasn't for here, I wouldn't have a place to go."

Nationally, foreclosures are at an all-time high. Filings are up nearly 100 percent from a year ago, according to the data firm RealtyTrac. Officials say that as many as half a million people could lose their homes as adjustable mortgage rates rise over the next two years.

California ranks second in the nation for foreclosure filings -- one per 88 households last quarter. Within California, San Bernardino county in the Inland Empire is worse -- one filing for every 43 households, according to RealtyTrac.
Maryanne Hernandez bought her dream house in San Bernardino in 2003 and now risks losing it after falling four months behind on mortgage payments.

"It's not just us. It's all over," said Hernandez, who lives in a neighborhood where most families are struggling to meet payments and many have lost their homes.
She has noticed an increase in crime since the foreclosures started. Her house was robbed, her kids' bikes were stolen and she worries about what type of message empty houses send.

The pattern is cropping up in communities across the country, like Cleveland, Ohio, where Mark Wiseman, director of the Cuyahoga County Foreclosure Prevention Program, said there are entire blocks of homes in Cleveland where 60 or 70 percent of houses are boarded up.

The housing bust is part of it, but so is the spiralling cost of health care, a dwindling job base as more companies outsource jobs taht pay a living wage, and the crushing debt that this president will be leaving us.

I only hope George W. Bush lives long enough (hopefully in whatever prison into which convicted war criminals convicted are sentenced) to see himself beat out Herbert Hoover in the Worst President Ever stakes.

Anonymous said...
I have a question. The "reporter" states that this tent city has expanded from 20 people to 200 people due to the housing crisis. Except, in paragraph 5, the "reporter" admits that "no current residents claim to be victims of foreclosure". How can anybody in their right mind use this piece as proof of anything and expect any kind of credibility?
12/22/07, 6:05 PM

Anonymous said...
Well, if random non-connected topics strung together like popcorn strings on a Christmas tree constitute a good article, then this is one.