Brilliant Recent Posts
Preznit no giv turkee
Thankful for kittehs
The Return of the Zombie Missing White Women
Onward Christian Soldiers
Well, I guess that's the end of it then
Who says you have to make that big hormone-laden b...
Why not just say "He's a schmuck, but he's our sch...
Oh, shit.
Around the blogroll and elsewhere: icepick, meet ...
So now we know. Now what? 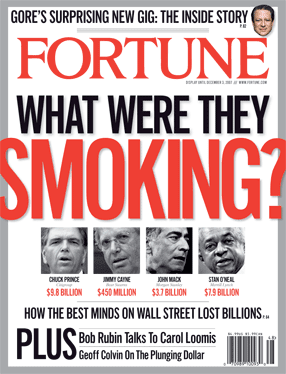 Enron. Tyco. The dot-com crash. No matter how many times we go through this, the business community never learns, and the public is bamboozled every time.

Adam Smith wrote in The Wealth of Nations of the "invisible hand" -- that an individual pursuing his own self-interest tends to also promote the good of his community as a whole. He believed the ridiculous notion that each individual maximizing revenue for himself maximizes the total revenue of society as a whole. It's not even saying "What's good for General Motors is what's good for the country." It's saying "I have a shitload of money. So what are you complaining about?", or in the vernacular, "I got mine and fuck you."

George W. Bush used to brag about the high percentage of people who were now homeowners. Now many of those "homeowners" are finding themselves losing those homes through foreclosure; with a stain on their credit records that will damage their ability to gain a toehold in the economy for years to come.

The business community couldn't have handled it better if they had set out to cut these people off at the knees and kicked them out of the middle class.

In a direct sense, the carnage on Wall Street is all about the great housing slump.

This slump was both predictable and predicted. “These days,” I wrote in August 2005, “Americans make a living selling each other houses, paid for with money borrowed from the Chinese. Somehow, that doesn’t seem like a sustainable lifestyle.” It wasn’t.

But even as the danger signs multiplied, Wall Street piled into bonds backed by dubious home mortgages. Most of the bad investments now shaking the financial world seem to have been made in the final frenzy of the housing bubble, or even after the bubble began to deflate.

In fact, according to Fortune, Merrill Lynch made its biggest purchases of bad debt in the first half of this year — after the subprime crisis had already become public knowledge.

The losses suffered by shareholders in Merrill, Citigroup, Bear Stearns and so on are the least of it. Far more important in human terms are the hundreds of thousands if not millions of American families lured into mortgage deals they didn’t understand, who now face sharp increases in their payments — and, in many cases, the loss of their houses — as their interest rates reset.

And then there’s the collateral damage to the economy.

You still hear occasional claims that the subprime fiasco is no big deal. Even though the numbers keep getting bigger — some observers are now talking about $400 billion in losses — these losses are small compared with the total value of financial assets.

But bad housing investments are crippling financial institutions that play a crucial role in providing credit, by wiping out much of their capital. In a recent report, Goldman Sachs suggested that housing-related losses could force banks and other players to cut lending by as much as $2 trillion — enough to trigger a nasty recession, if it happens quickly.

Beyond that, there’s a pervasive loss of trust, which is like sand thrown in the gears of the financial system. The crisis of confidence is plainly visible in the market data: there’s an almost unprecedented spread between the very low interest rates investors are willing to accept on U.S. government debt — which is still considered safe — and the much higher interest rates at which banks are willing to lend to each other.

How did things go so wrong?

Part of the answer is that people who should have been alert to the dangers, and taken precautionary measures, instead blithely assured Americans that everything was fine, and even encouraged them to take out risky mortgages. Yes, Alan Greenspan, that means you.

But another part of the answer lies in what hasn’t happened to the men on that Fortune cover — namely, they haven’t been forced to give back any of the huge paychecks they received before the folly of their decisions became apparent.

Around 25 years ago, American business — and the American political system — bought into the idea that greed is good. Executives are lavishly rewarded if the companies they run seem successful: last year the chief executives of Merrill and Citigroup were paid $48 million and $25.6 million, respectively.

But if the success turns out to have been an illusion — well, they still get to keep the money. Heads they win, tails we lose.

Not only is this grossly unfair, it encourages bad risk-taking, and sometimes fraud. If an executive can create the appearance of success, even for a couple of years, he will walk away immensely wealthy. Meanwhile, the subsequent revelation that appearances were deceiving is someone else’s problem.

If all this sounds familiar, it should. The huge rewards executives receive if they can fake success are what led to the great corporate scandals of a few years back. There’s no indication that any laws were broken this time — but the public’s trust was nonetheless betrayed, once again.

It's interesting that Fortune only started caring about the carnage when it began hitting the banks. When the housing bubble was actually going on, and even when it started to collapse and middle-class Americans were being affected, the business community didn't care. But now that it's hitting the banks, and the people who make huge sums of money may not get their obscene bonuses this year, suddenly it's a problem. It's also interesting that the Fortune article doesn't even mention the compensation these guys receive for running these companies into the ground while middle-class Americans are ruined.