Brilliant Recent Posts
I'm pissed off
Blues for New Orleans
Why I don't want to live forever
Same as the old boss, etc.
I don't know why stories like this even surprise m...
No end to the parade of crooks and cronies in the ...
So why on earth are the Democrats so bound and det...
What the fuck?!?!
Goodbye, USA?
Why the Democrats aren't a shoo-in for 2008


You Know What Would Restore Confidence in the DOJ?
Posted by jurassicpork | 12:36 PM 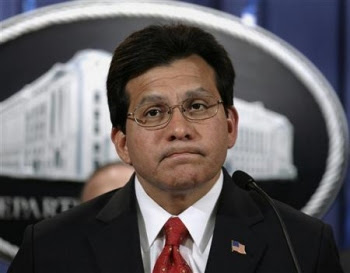 Impeachment, impeachment and more impeachment. Impeachment of Gonzales, which is still technically feasible. Impeachment of Cheney. Impeachment of the monkey who gave his bestest buddy the top cop job in the nation. Nothing less would do. And I am fucking sick and tired of Republicans and especially Democrats calling for Bush to nominate a successor to Gonzo who will “restore confidence in the Justice Department,” yadda yadda yadda.

You want to know who Bush has in mind to replace Gonzales? Take a gander at this short list of the Usual Suspects:

George Terwilliger, Jr., whose profile on CNN.com states: “Leader of President Bush’s legal team during the Florida election recount of 2000.” Hmm… Let’s try the next guy…

Theodore B. Olsen: “Member of President Bush’s legal team during the Florida election recount of 2000.” Oooh…

Michael Chertoff: Need we say more? Current and failing chief of a Homeland Security bureaucracy that is neither efficient nor needed. Co-author of the USA PATRIOT Act that we also never needed, nominated to fill a post in which his predecessor was needed about as much as a German Shepherd’s teeth in an Iraqi’s ass. Maybe we’ll have better luck with the acting AG…

Still, that’s not too bad since… Oh, shit:

Prior to serving as solicitor general, Clement was the deputy to his predecessor in the post, Theodore Olson. He also worked for Ashcroft, then a Missouri senator, and filed supporting briefs with the Supreme Court on behalf of Bush in the dispute over the 2000 presidential election.

Add to the pile his working under Tony “Hothouse Grapes” Scalia.

What the fuck is Russ Feingold thinking of besides “fellow cheese head” when he threw his lot in with this partisan hack?

So, bottom, folks, when you look at this short list, and I don’t know how official this is, you can see what the Senate Judiciary Committee will have to work with and we’re going to have a “Don’t bother sitting down, sir” type of confirmation hearing like the one that got Robert Gates into the Pentagon. Best case scenario, we’re looking at Gonzo Lite.

And, since there’s just under 16 months left in Bush’s criminal empire that’s not-so-quietly dedicated to Republican supremacy (despite what Richard Viguerie thinks in his cockroach brain) and totalitarian spying that would make Big Brother reach for his legal pad and take notes, how much confidence can be restored between now and January 20, 2009?

George Bush could single-handedly raise Oliver Wendell Holmes from the dead and nominate him and it still wouldn’t come close to repairing the damage that Gonzales and his Liberty University Legion (many of whom are still in place) has inflicted on this country, its confidence in its criminal justice system and our two party system of government.

And to give you an idea of how the Senate will vote on this, note that not one senator of either party has once outright said that Gonzales simply lied to the Judiciary Committee. We’re hearing phrases like, “not forthcoming with his testimony”, “lack of candor”, “conflicting testimony”, blah blah blah.

In other words, when Gonzales’s possible successor sits down, provided they let him sit down, to testify for his confirmation, they will let him lie, lie, lie regardless of his past affiliations, statements or actions and not even call him on it. Just like they let Roberts lie about him respecting stare decisis, just like they let Alito lie about him not knowing about CAP’s misogynistic, racist charter, just like they let Gonzales lie two and a half years ago about his stance on torture.

…all for the purpose of replacing someone who aggressively engaged in a ferociously partisan, hideously illegal campaign to get Republican scumbags like Duke Cunningham off the hook and smear Democrats before election day on trumped-up charges of voter fraud then to fire those US attorneys when they didn’t comply like good little Republicans.

And it’s the Senate Judiciary Committee that got us into this mess in the first place, by making Gonzo sound like a shoe-in because he rose from poverty and that anyone who opposed him on the Bybee torture memo and other issues was a bigot, plain and simple. The same Mexican-baiting Republicans of today who are even now slamming the door on Alberto’s fat ass on the way out. So spare us the fucking piety and hankie-wringing over the subversion of the rule of law.

And perhaps they ought to reconsider who they confirm in light of Congress just giving the Attorney General as well as the DNI the power to designate terrorist suspects for extra-FISA warrantless wiretapping.

Because they’re about replace Gonzales, someone who succeeded in achieving the impossible and unthinkable: Making John Ashcroft, his predecessor, look like a principled, ethical, conservative American hero. Ashcroft wrote and sang a song entitled, “Let the Eagle Soar.”