Brilliant Recent Posts
How Are Your Lungs, Rudy?
Captain America Is Dead
Coraline
The Incomplete Package, Part One
Bushwhacked
I'm surprised I missed this one
The Good Bad Girl
Meet Your Guestbloggers
The HRC/LOGO VisibleVote '08 Forum
Chris Matthews: Still in love with the codpiece 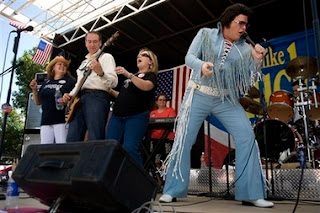 Fortunately, via Buzzflash.net, Todd at Blue State has been live-blogging the event all night. If we were to depend on AP, we’d never know that Diebold machines were being used in Romney’s stunningly predictable “victory” in Iowa. (Free Market News has more on the Republican fuckuppery that AP and other news outlets will be too chivalrous to mention.)

Ron Paul, who actually tried to poach votes by telling people to take advantage of Romney’s buses to the straw polls and paying the $35 registration fee so they could vote for him, is hopping mad so don’t think that this will gently go into that good night.

They can't even have a one party straw poll without poking and slapping themselves like Moe, Larry and Curly. This is going to be a wild and wooly presidential election so make sure you bring seat belts to the polls next November.

Here’s some good news: According to FMN,

The scuttlebutt is that about 14,000 votes were cast. The Iowa GOP was saying they were expecting up to 30,000 votes, so getting only half that many -- and therefore only half as much money -- will likely cause them some hardship.

To reverse the old show business adage, if you don’t give them what they want, they won’t come out for it, even if there is roast pig and Elvis impersonators.