Brilliant Recent Posts
Hillary Rodham Clinton: The candidate the Democra...
The next battlefront for controlling women
American Idol
When Petreus acts as George W. Bush's ventriloquis...
Look Out Below
John Edwards is the one Karl Rove fears
Onward to Iran
Now it can be told, or The Most Coolest Thing I Ha...
The Vanishing
The Incomplete Package, Part III


In other words, a dictator...sort of like old What's-his-Name
Posted by Jill | 3:27 PM
Via Hoffmania comes this CNN report by Michael Ware and Thomas Evans, that the military is realizing that three warring factions that were killing each other for thousands of years are not the best candidates for Jeffersonian democracy:

Nightmarish political realities in Baghdad are prompting American officials to curb their vision for democracy in Iraq. Instead, the officials now say they are willing to settle for a government that functions and can bring security.

"Democratic institutions are not necessarily the way ahead in the long-term future," said Brig. Gen. John "Mick" Bednarek, part of Task Force Lightning in Diyala province, one of the war's major battlegrounds.

The comments reflect a practicality common among Western diplomats and officials trying to win hearts and minds in the Middle East and other non-Western countries where democracy isn't a tradition.

"I would describe it as leaving an effective government behind that can provide services to its people, and security. It needs to be an effective and functioning government that is really a partner with the United States and the rest of the world in this fight against the terrorists," said Mixon, who will not be perturbed if such goals are reached without democracy.

In other words, a government run by someone that can make the trains run on time AND with whom we can do business. Someone sort of like......this guy: 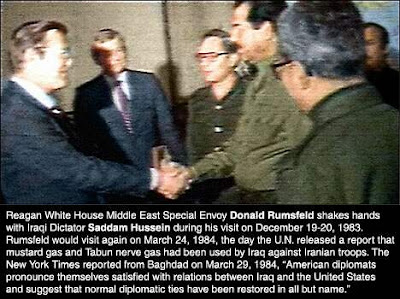 Oh yeah. I forgot. We had that one killed.

Labels: clusterfuck, Iraq, the more things change the more they stay the same