Brilliant Recent Posts
The Forgotten Candidate
Why Sanjaya must win
Katie Couric is going to be SOOOOO disappointed
Now this just might be a worthy effort at combatti...
Around the blogroll and elsewhere
Someone page Bill Donohue -- there's a war on East...
Blog 'n' Roll
Blog Comment of the Day
Poking the Atrios Bear
Is isn't just pet food anymore


The human toll of the Iraq war that we don't see
Posted by Jill | 6:53 AM
I can't even express how my heart hurts that after not learning the lessons of Vietnam, we are going to have yet another damaged generation of young men:

Blinded and disabled on the 54th day of the war in Iraq, Sam Ross returned home to a rousing parade that outdid anything this small, depressed Appalachian town had ever seen. “Sam’s parade put Dunbar on the map,” his grandfather said.

Now Mr. Ross, 24, faces charges of attempted homicide, assault and arson in the burning of a family trailer in February. Nobody in the trailer was hurt, but Mr. Ross fought the assistant fire chief who reported to the scene, and later threatened a state trooper with his prosthetic leg, which was taken away from him, according to the police.

The police locked up Mr. Ross in the Fayette County prison. In his cell, he tried to hang himself with a sheet. After he was cut down, Mr. Ross was committed to a state psychiatric hospital, where, he said in a recent interview there, he is finally getting — and accepting — the help he needs, having spiraled downward in the years since the welcoming fanfare faded.

The story of Sam Ross has the makings of a ballad, with its heart-rending arc from hardscrabble childhood to decorated war hero to hardscrabble adulthood. His effort to create a future for himself by enlisting in the Army exploded in the desert during a munitions disposal operation in Baghdad. He was 20.

He was also on his own. Mr. Ross, who is estranged from his mother and whose father is serving a life sentence for murdering his stepmother, does not have the family support that many other severely wounded veterans depend on. Various relatives have stepped in at various times, but Mr. Ross, embittered by a difficult childhood and by what the war cost him, has had a push-pull relationship with those who sought to assist him.

Several people have taken a keen interest in Mr. Ross, among them Representative John P. Murtha, the once-hawkish Democrat from Pennsylvania. When Mr. Murtha publicly turned against the war in Iraq in 2005, he cited the shattered life of Mr. Ross, one of his first constituents to be seriously wounded, as a pivotal influence.

Mr. Murtha’s office assisted Mr. Ross in negotiating the military health care bureaucracy. Homes for Our Troops, a nonprofit group based in Massachusetts, built him a beautiful log cabin. Military doctors carefully tended Mr. Ross’s physical wounds: the loss of his eyesight, of his left leg below the knee and of his hearing in one ear, among other problems.

But that help was not enough to save Mr. Ross from the loneliness and despair that engulfed him. Overwhelmed by severe symptoms of post-traumatic stress disorder, including routine nightmares of floating over Iraq that ended with a blinding boom, he “self-medicated” with alcohol and illegal drugs. He finally hit rock bottom when he landed in the state psychiatric hospital, where he is, sadly, thrilled to be.

“Seventeen times of trying to commit suicide, I think it’s time to give up,” Mr. Ross said, speaking in the forensic unit of the Mayview State Hospital in Bridgeville. “Lots of them were screaming out cries for help, and nobody paid attention. But finally somebody has.” 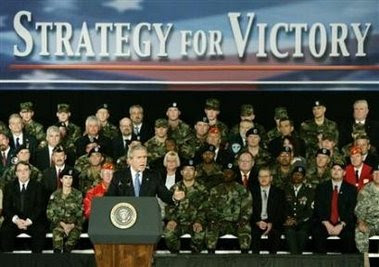 But Jobn Murtha can't be there for all of them; all the tens of thousands of walking and non-walking wounded; all those who may seem fit on the outside but their psyches are shattered. These soldiers have a commander-in-chief who doesn't hesitate to exploit them as props for political purposes, but these are also men trained to be tough, and tough guys have a very hard time admitting they need help.

What the military needs to do is provide active outreach to every returning soldier. Find a way to fund it somehow. But every returning soldier should receive a phone call or a visit once a month "just to see how you're doing and if you need anything." The military breaks a soldier down to turn him into a killing machine. It has an obligation to put him back together if he's lucky enough to make it home.