Brilliant Recent Posts
The best Daily Show correspondent since Stephen Co...
Why Hillary refusing to admit a mistake on the Ira...
And Bill Maher is friends with this guy?
The State of Medical Care in the United States
Hillary punts on Iraq again
American Idiot Watch for Saturday, February 10
OK, all you woodworkers out there, 'fess up!
Ladies and Gentlemen, I bring you the next Preside...
Wow....another one
Blogswarm this


What kind of chumps do they take us for?
Posted by Jill | 7:28 PM
First class, apparently.

Steve from NewsHog sent us a link to this article and this photo, purportedly of a bomb made by Iran for the Iraqi insurgency: 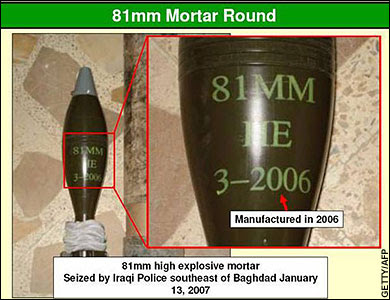 Funny how Iran prints the information on its bombs in ENGLISH, isn't it?

Sean-Paul Kelley at The Agonist knows something about such things, and he is highly skeptical.

By the way, for what it's worth, while "insignificant" sole proprietor bloggers like Steve and Sean-Paul are busy debunking the Administration's claims of Iran-made bombs in the hope of staving off a war, Atrios has a YouTube of a Brahms piece and a link to the Newsweek article I linked to this afternoon; Chris Bowers' last posting at MyDD is an open thread (though Matt Stoller is talking about the anti-Hillary narrative), and the Kossacks are a) reprinting blurbs from Talking Points Memo, b) talking on a Midday Open Thread, and the Dark Lord SaruKos himself makes a cameo appearance to blast Hillary's unrepentance about the war.
0 comments