Brilliant Recent Posts
Coming soon: a new "Critics over Coffee"
No accountability on Wall Street
A scene from my favorite Christmas movie
Not me. I finished putting together a Craftsman T...
Well, it's about freakin' time
What Happens When Even Santa's Job Gets Outsourced...
Some thoughts from a nonbeliever on Christmas Eve
Sorry, Rudy, but when you're running for president...
Oh, brother...
Looks like I got out of doing movie reviews at the... 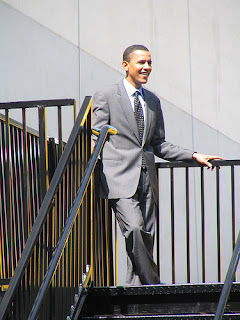 I'm really glad I was too sick on December 13 to watch the Democratic debate, or I would have put my fist through the damn TV. Because it seems that Barack Obama said this:

“If we could go back to the obesity rates of 1980 we could save the Medicare system a trillion dollars.”

He really HAS gone to the Joe Lieberman School for the Development of Pat Answers, hasn't he?

Meowser thinks that this view warrants some more questions:

“Do you believe in reducing the number of fat people by any means necessary? What if people really make an effort to exercise and ‘eat right’ but are still ‘obese’? Do you favor requiring them to have bariatric surgery, or putting them in weight-reduction prisons, or having a police state in which people get their homes broken into and their pantries cleaned out and forced at gunpoint to work out until they drop, or being barred from all restaurants and grocery stores and all public places until they slim down? How far are you willing to go?”

“If certain medications have been demonstrated to foster weight gain, do you favor taking them off the market, even if they make it possible for a person to live something approaching a ‘normal’ life in every respect except weight? There are, after all, many more of these drugs on the market than in 1980, and many have attained very high levels of usage. Do you really want to take them away from people to make them thin?”

Not that I expect real, informed answers from any of ‘em. They’ll probably mumble something about how, of course they don’t want to round us all up and amputate our stomachs, of course they don’t want to impinge upon our personal freedoms, of course of course of course. All they want is for us fatasses to eat our vegetables and exercise, and most all of us will magically get and stay thin and never have costly health problems again! And if they’re Democrats they’ll probably also mumble something about how they’ll give the veggies away, if they have to, along with the pots, pans, stoves, cooking classes and electricity required to prepare all those nummy orange-and-greens. Oh, and of course, we must think of the children, and take all the skin off their chicken before they are doomed to a life of FAAAAT! Ha. Ha ha ha. Ha.

I get exercise about five times a week. I do yoga. I walk at lunchtime. I watch Dirty Sexy Money while on the stationary bike. No, I don't go to the gym for two hours a day because frankly, there are other things I'd rather do with my time than run on a treadmill like a fucking hamster. I like broiled marinated skinless chicken and grilled salmon and orange roughy, the latter baked with a very light coating of seasoned panko breadcrumbs. I like beans. I rinse the ground beef after browning it before I put it in the sauce. I haven't fried anything since I think 1978. I eat fruits and/or and vegetables with every meal. If I eat chocolate, it's a small square of 71-73% organic dark chocolate from Trader Joe's, and that's really quite enough. I haven't touched a doughnut in at least a decade. I haven't touched a Twinkie in probably 40 years, probably because they're nauseating. I don't eat fast food. The very thought of a brownie with vanilla ice cream, hot fudge, and whipped cream makes me sick. My idea of a great dessert is a cookie. My blood pressure is 120/70. My HDL is fine and my LDL is maybe a wee tad high -- if the blood is drawn on a day I've eaten. My totals are just over 200. I can walk 2.2 miles on my short legs in 43 minutes even with the last 1/4 mile being all uphill. I have over 72 days of accumulated sick time that I haven't taken.

So I don't need some skinny-ass politician who's never had to think about his weight ever in his life telling me that I'm driving up health care costs.

Sen. Obama? I'd been thinking that if John Edwards isn't the nominee, I could vote for you without too much regret. I guess I was wrong. I hope Michelle gave you a good verbal swatting when you got home that night.

2Truthy said...
Well for those of us who were unfortunate enough to have watched Obama on 12/13, he also proved himself to be the insulated Haaavahd elitist who is out of touch with the needs of people in this country.

adam k. said...
I remember being impressed with Obama at the latest debate, mostly for how he presented himself, his style and manner of speech (which had previously been wobbly and indistinct... lots of "um... look" type interjections and pauses). But I don't remember this comment. It does kinda reek of "well, I'm skinny, how hard could it be?" naiveté.

He definitely isn't my choice to be the nominee - and frankly I think he might be less electable than Hillary (he's not a fighter) - but I could still take pleasure in voting for him. Whatevs. I'm still crossing my fingers for Edwards... I'll cross any other bridge when we come to it.
12/27/07, 4:05 PM

adam k. said...
But isn't it kind of nice that we're at least at a point where the top two candidates are getting more attention, more money and more enthusiasm BECAUSE they're a woman and a black man? Edwards' biggest problem, other than being a rabble rousing populist, is that he's the "boring white guy" who seems not to represent change on a surface level (though in reality of course he does).

I'm at least happy that dems wanna make history this year. It's a lot more than you can say for Repugs. I'm just hoping the two history makers cancel each other out in the end... and that Edwards eventually chooses Obama as his running mate.
12/27/07, 4:08 PM