Brilliant Recent Posts
Can This Nation Survive This Much Stupid?
In Ohio, voting is only a right if you're white
Paul Ryan is a liar too
Open Thread
The Riot of the Pussies
Mitt's Whiteboard
Plug it, Sarah
Goodbye, Johnny
Why Jamie Dimon Needs to Go Fuck Himself With a Mi...
Women on the Sunday Morning Sausagefest should be ...


Where the Chess Players Used To Sell
Posted by Tata | 8:20 PM
I am pay-attentiony, so I am aware of stuff and shit, as Dad used to say. Pete and I grew up in the same town, playing in the same woods, stomping in the same creeks and, when our town finally got a grocery store, walking up and down those same store aisles with our moms. That ShopRite left town and was replaced by another grocery store, which changed companies and names several times and recently moved to another building in the same mall for more, cleaner space. We know this Stop & Shop inside-out and backwards, so we were both perturbed when about a month ago, we found it in an uproar as the staff rearranged it. Last weekend, the stupid partitions, bread racks and crooked handwritten signs were gone, so the current arrangement has a look of permanence. It is our habit to walk in the front door, stop at the Hot Wheels display - because Hot Wheels! - and head right for the natural foods aisle against the left wall. We turned the corner and skidded to a rough stop. 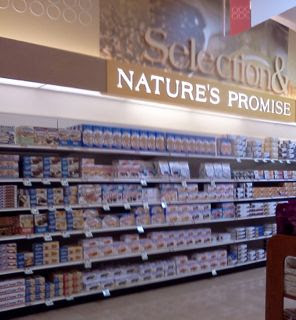 At last, my camera phone captures both angst and ennui. Pulitzer, please!

Ta darling, you're saying, just because spokesmodel Andrew Zimmern says don't make it so. Perhaps the perimeter is optional, not optimal. Oh yeah?

Picture your favorite grocery store. Chances are the fresh produce section, the meat and seafood departments, and the dairy case are all located around the perimeter of the store. This is where you should concentrate most of your shopping time. Why? Fresh foods are generally healthier than the ready-to-eat foods found in the middle aisles. This helps you better control the fat and sodium in your diet.

Stay out of the middle of the supermarket; shop on the perimeter of the store. Real food tends to be on the outer edge of the store near the loading docks, where it can be replaced with fresh foods when it goes bad.

Don't eat anything that won't eventually rot. "There are exceptions - honey - but as a rule, things like Twinkies that never go bad aren't food," [Michael] Pollan says.

These helpful people agreed strongly enough to make YouTube videos about this topic. Not food, and certainly not natural food, but it is a lie and a very cynical manipulation, isn't it? Anguished cries of Mommy, HoHos are health food! must rend the air a hundred times a day. 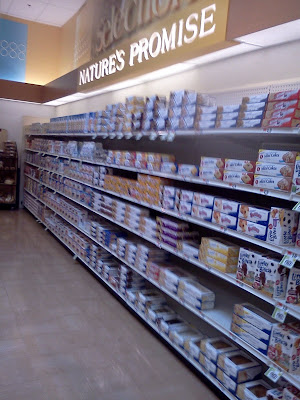 At this point, I was looking for store security but they were probably on their phones, too. In grocery stores, everyone is. Possibly with the Mayo Clinic.