Brilliant Recent Posts
They don't live any longer, it just SEEMS longer
Katrina's Ghost
No, they're not racist at all
Why is Paul Ryan Still on the GOP Ticket?
Tweety Drinks the Potion Instead of the Koolaid
And yet we're supposed to believe that a movie the...
Hateapalooza
Sir Whitey McWhitington of Maison De Blanc
Nothing To Do, Nowhere To Go
Open Thread 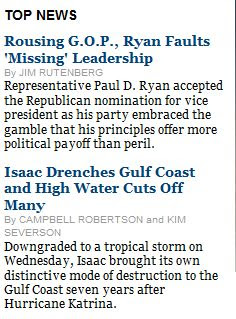 The closest the Gray Lady came to doing its job when reporting in its lead story Paul Ryan accepting the GOP nomination for Vice President was in juxtaposing it with the other lead story about Issac making landfall on the seventh anniversary of Katrina, thereby manufacturing an irony that's nonetheless true.

Because the new Goebbels of the GOP accused President Obama of "missing leadership" on that seventh anniversary of Hurricane Katrina, which has been taking New Orleans on a soggy stroll down Memory Lane with category 2 Hurricane Issac topping the levees and flooding the city that's still reeling from the effects of "reforms" that are harming the city's residents that haven't been gentrified out.

You all remember Katrina, right? That's the hurricane that essentially disappeared a great American city and her best friend was an absent George W. Bush who was on vacation and essentially did nothing even after learning the levees were not only in danger of being topped but also of being breached. Then, when Bush finally showed up, he was at Louis Armstrong Airport talking about his days of debauchery in NOLA as a college undergrad then grounded rescue choppers while he told FEMA chief Michael Brown, "Heckuva job, Brownie!"

To complete the PTSD, the GOP even had the effrontery to invite Condi "Who Knew the Levees Would be Breached" Rice, who had to be shamed into making even a photo op in her native Gulf Coast after being nationally embarrassed by a shopper who'd accosted her while she was shoe-shopping at Ferragamo's even as her people were drowning. 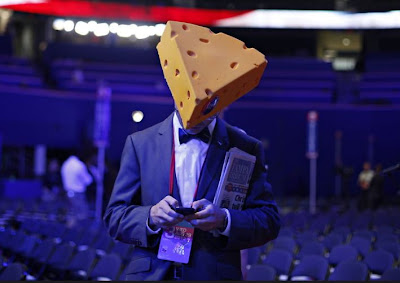 And the Gray Lady gets no points for merely dutifully reporting whatever Paul Ryan said without making the slightest attempt at fact-checking, let alone editorializing, save to say,

Likewise, Mr. Ryan, whose deep budget-cutting plans drew intense criticism from Mr. Obama long before the Republican ticket was completed, accused the president of failing to act on the recommendations of his own bipartisan debt commission. Mr. Ryan did not mention that he had served on that commission and dissented from its policy proposals, which included specific steps to reduce budget deficits.

Ryan did, indeed, vote against his own commission's recommendations but not, we can assume, because the cat food commission not only voted for austerity measures on the poor and needy but also for corporate tax cuts.

Ryan's speech, naturally, didn't go into specific policy proposals because an acceptance speech is neither the time or place for that. But to those of us who look and listen beyond the party propaganda get the feeling that the Romney-Ryan ticket as yet doesn't have any specific proposals aside from gutting Medicare and replacing it with a hollowed-out corpse (something the Gray Lady had no stomach to mention) and lowering taxes to Romney's and Ryan's mutual benefit.

And, while gently repudiating the administration before last, the R&R boys couldn't help but harken back to it, inviting a largely ignored John McCain, their last nominee, and Bush's former Secretary of State to speak. George Bush himself was reduced to making a Max Headroom appearance, delivering a weepy-eyed speech by video extolling not Mitt Romney but his war criminal father.

The "new" GOP may try to fool their acolytes into thinking they're moving in a bold new direction but they keep circling in place like a junk yard dog chasing its mangy tail and even time and the climate itself aids and abets their doom to repeat its sordid history.
0 comments