Brilliant Recent Posts
No, they're not racist at all
Why is Paul Ryan Still on the GOP Ticket?
Tweety Drinks the Potion Instead of the Koolaid
And yet we're supposed to believe that a movie the...
Hateapalooza
Sir Whitey McWhitington of Maison De Blanc
Nothing To Do, Nowhere To Go
Open Thread
They Didn't Build That
The Mike Flannigan Diaries 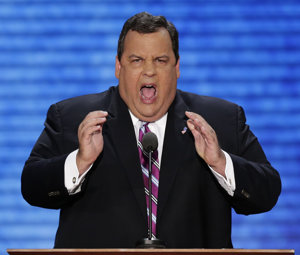 "Yo, when the fuck do we eat? Don't tease me and make this uglier than it has to be..."

Irony just happens to follow the Republican Party like Pig Pen's dust cloud or an unsavory reputation. Seven years to the day after Hurricane Katrina, Hurricane Issac, after graciously grazing by the Tampa Bay Times Forum and allaying conservative frustration at not getting out their message to 16,000 of my colleagues, has, instead, slammed into reliable target New Orleans, Louisiana, the epicenter of the clusterfuck that was the Bush administration's "response" to Katrina. Talk about a Seven Year Itch. In fact, the levees got topped. Again. Who knew?

Then there was the keynote speaker, New Jersey Governor Chris Christie, who delivered a surprisingly folksy and civil speech (if you listen to the carefully cherry-picked Yahoo readers who were asked for their honest opinions by the liberal search engine site) that only seemed to take time out from its self-aggrandizement to reluctantly remember the Man of the Hour, Artful Tax Dodger Mitt Romney. The irony here is that it came out just before the convention that Christie turned down the B side of the Republican ticket because he didn't think Romney could win.

That, and it may have had something to do with the pesky federal election laws that place prohibitions on how much corporate payola a sitting Governor can accept while running for federal office (which may have something to do with why Willard was so eager to get out of the Massachusetts State House on Beacon Hill in January 2007 because he had presidential aspirations that he began pursuing mere weeks later.).

As expected, Queen Ann Romney's speech wasn't worth listening to. Imagine a Stepford wife with irritable bowel syndrome droning on about how important it is to have your quarter billionaire husband's taxes reduced from a brutal 13% and you'll save yourself a lot of pain.

Then, there was the mini Republican riots on the convention floor, mostly coming from Mainers (who left the floor en masse during the delegate count) and other Ron Paul supporters who are rightfully indignant that Romney's campaign has essentially squelched dissent for a 2016 national convention of which Romney will obviously never play a part. Considering that Romney's been calling the Obama administration on its lack of transparency, this pre-emptive move on the 2012 Romney campaign to step on the first amendment rights of fellow Republicans does not augur well, to say the least.

Then, two of the same Republicans who bristle and get their dander up at the very hint of being accused of racism were ejected from the RNC for throwing peanuts at an African American CNN camerawoman and saying to her, "This is how we feed animals." Surprisingly, the Republican National Committee and convention officials have been close-mouthed about the whole affair.

Of course, this ought not be treated as an isolated incident but all of a piece. The GOP in general and the Romney camp has been pulling the race card almost from day one and now even black people whose name isn't Barack Obama are all fair game in this conservative safari known as the RNC convention.

The Romney campaign sincerely wanted to unite the party in order to project an image of consensus. Each party in each of its quadrennial presidential conventions wishes to do that. But for once, the Republicans have proven to be at least as fractious as the Democrats and liberals historically have been since the 1960's. The keynote speaker and one time VP short lister doesn't think Romney and Ryan can win. The delegates can't be kept on the floor because the Romney campaign wants to change to rules to quell dissent four years from now. Ron Paul supporters showed on live national TV how much they loathe Romney. And the racists that the GOP courts out of the corner of its mealy mouth just can't behave themselves when there are African Americans about.

All that remains to be seen is how the Democratic Party fucks up this golden opportunity in Charlotte, NC in a week by outdoing the Republicans with their historical fractiousness.
1 comments