Brilliant Recent Posts
Clint's Empty Chair
Saving Private Equity
They don't live any longer, it just SEEMS longer
Katrina's Ghost
No, they're not racist at all
Why is Paul Ryan Still on the GOP Ticket?
Tweety Drinks the Potion Instead of the Koolaid
And yet we're supposed to believe that a movie the...
Hateapalooza
Sir Whitey McWhitington of Maison De Blanc


Clint Made Our Night
Posted by jurassicpork | 1:19 PM 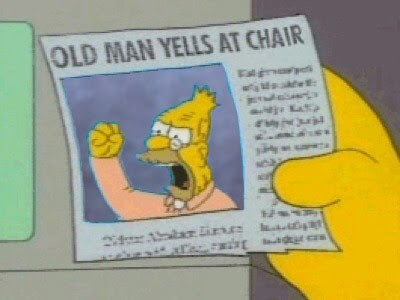 The MSM reports this morning on Clint Eastwood's rambling monologue at the GOP convention last night.

It took 28 years but it finally came full circle.

In Sudden Impact, the 1984 Dirty Harry sequel, Clint Eastwood uttered a line that would be as immortal as, "Well, do you feel lucky today... punk?" when he uttered, "Go ahead- Make my day." Ronald Reagan, a man who ran the country as if he was making an eight year-long Bonzo movie on a sound stage, used it against Congress the following year.

And, though it took nearly three decades, it wound up in the mouth of Clint Eastwood again like a stale signature joke in the mouth of a once-funny but irrelevant comedian. "I don't get no respect." "Take my wife, please." "Make my day." These were lines that were almost as hilarious as Ryan's and Romney's palpable, provable lies. And, were it not for Clint Eastwood's prop, the 82 year-old actor would've stolen all of Romney's thunder, whose own speech was described as being met with less than enthusiasm.

And Eastwood's disjointed and factually-challenged monologue/dialogue with a piece of furniture was a pathetic spectacle to behold- a brilliant filmmaker plainly in the twilight of his career, if not his lucidity, thought it would be a good idea to speak to an empty stool while Mitt Romney winced backstage.

It all started when, during his unscripted and unprompted pantomime, when he claimed Hollywood was not full of liberals as the GOP insists on believing. This is not only true but virtually every action star since John Wayne is a rock-ribbed conservative. But Eastwood then took a jab at liberal celebrities by saying that conservatives "don't hot dog it" regarding their political affiliations. This was pathetically out of touch and can be disproved by the very man Eastwood mentioned, Jon Voigt, who'd a couple of years ago went full metal birther on Obama on national TV and had continued his right wing shenanigans in Tampa right up until last night (including telling daughter Angelina Jolie that George Clooney was a bad influence on Brad Pitt. What is this, junior high in Voigt's conspiracy theory world?).

But Eastwood's Harvey routine went more than a few shades to the right in other things he'd wound up saying to the audience/stool.

He's obviously lost a step or two since he was the one term mayor of Carmel, California and perhaps beating up on him comes off as looking like elder abuse. But Eastwood at least knew very well what his intention was and all his talking points were classic right wing ones and all his lies (and there were many, many of them) were right out of the GOP playbook.

It's hard to pick a starting point in all of Eastwood's meanderings so start with his lie that there's 23 million people unemployed. In reality, according to the BLS, it's 12.8 million, still a too-high number, but it's almost half of what Eastwood has been saying. Plus, even if that number pulled by Eastwood out of his ass was real, why should anyone, especially wealthy, well-heeled Republicans, trust the GOP or give a shit about their sudden concern about jobs when they themselves ran on that same opportunistic platform just two years ago only to forget about job creation the second they retook the House?

So, who's best suited to bring jobs back to America? Well, according to Eastwood, that would be Mitt Romney, a dissembling, rapacious psychopath who'd shipped, at minimum, 100,000 jobs to China. Indeed, according to Clint, what we need to get this country back on track was a businessman, considering how admirably well that worked for us between 2001-2009.

The Oscar-winner blamed Obama for Afghanistan. He wants us out. Romney wants us out. And, yes, Obama did ramp up Afghanistan but outside of Eastwood's and the GOP's Swiss cheese memory, Bush was the one who'd first invaded the first of two countries that had nothing whatsoever to do with 9/11.

Gitmo's still open, Clint? True, but you've obviously forgotten it was also your beloved Republican Party in the Senate that had blocked the funding necessary for Gitmo's closing.

And what's the matter with trying terrorism suspects in New York City? The Underwear Bomber was tried, convicted and sentenced in federal court in Detroit with no incidents whatsoever. Obviously, in Eastwood's worldview, it's far better to detain these people for a decade or more without charges only to have to release these very innocent but very pissed off and resentful terrorism suspects into the wild.

I could go on and on but many of us, starting with the Romney campaign, have already come to the same conclusion: That it was a shamelessly shameful and pathetic spectacle for Eastwood to speak to an empty chair and put words in an imaginary man's mouth and badmouth the Vice President for doing something Dick Cheney had much more infamously done years ago. Invisible Obama stole the show just as the visible one will, of course, steal the show during the Democratic convention in North Carolina next week.

I rather preferred the Clint Eastwood of 40 years ago, the one that reluctantly took the stage at the 1972 Oscars after being grabbed to fill in for a tardy Charlton Heston, the one who'd remarked how ironic it was for them to grab a guy who hadn't said 12 words in his whole movie career.
0 comments