Brilliant Recent Posts
By the time we hit two million I'll be old enough ...
When ideology and lust for power trumps EVERYTHING
Tell me you've never done this.
Expect a massive shitstorm over this
One state's pork is another state's vital project
Top 10 Revelations in Today's Parliament Inquiry i...
So why is she on the cover of Newsweek?
Tuesday Big Blue Smurf Blogging: What They Said
Mr. Greenspan, will you please STFU already?
It is better to light a single candle than to curs... 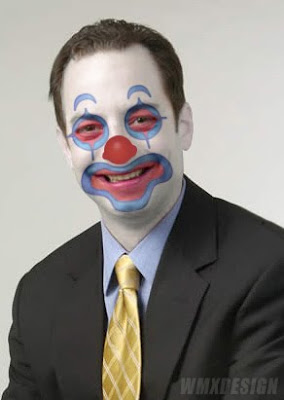 As a proud blindly reactionary, anti-liberal, borderline racist Republican like my enviably bloated father Harold, I do the right things, hold the right positions, think what I'm told to by the right people and there's no one righter than RNC Chairman Rinsed Penis Prince Prius Michael Steele's replacement.

That means I subscribe to the Chairman's balcony pronouncements via electronic mail (which I do not think will last. Don't count out the carrier pigeon just yet). What follows is Our Glorious Leader's latest communique to the proles from on high:

They are at it again! The liberal media and the Obama spin machine are furiously laying the groundwork to blame Republicans if the government were to default on August 2nd.

The truth is Obama caved to Nancy Pelosi and his Party's ultra-left wing on Friday and they sabotaged the negotiations with GOP leaders by demanding EVEN HIGHER TAXES at the last minute of negotiations.

The Republican Party's stance is clear: We need spending cuts not new taxes.

Obama promised America a better economy when he was elected in 2008. But there is no doubt that his and the Congressional Democrats insatiable hunger for ever higher taxes, greater government growth, reckless spending and massive trillion dollar deficits have only made things worse. More job killing taxes are the last thing our economy needs.

It's no surprise that the liberal Democrats would now rather play politics than tackle the government's addiction to spending - and the liberal media will be there to support them every step of the way.

Even worse, Obama and his leftist allies will be running scare and attack ads against our most vulnerable members and we need to support them now!

Please help us fight the Obama Democrats' message machine and their liberal media allies. This is a serious debate affecting real families. We must make sure our friends and neighbors know the truth - Republicans are offering serious solutions while the Democrats default on our government obligations.

Support our Republicans who boldly stand against the Obama/Pelosi plan to raise taxes today! Make a special campaign contribution to the RNC right now of $25, $50, $100 or more. Every dollar you send now will be used to fight the Obama spin machine as we work to make him a one-term president and work to turn our nation around.

P.S. , Republicans are fighting tooth-and-nail to pass commonsense, conservative solutions to cut government spending, slash our debt and get our fiscal house in order -- while the Obama Democrats demagogue and distort our agenda. The only way we can truly enact our reform agenda is to elect a Republican president AND Congress and make Barack Obama a one-term president. Please make a generous campaign contribution today to help the RNC fight the Obama media machine and lay the foundation for electing a new President and Republican majorities at all levels in 2012. Thank you.

Fucking A! (And pardon my French and pardon me again for speaking French, the language of diplomacy i.e. cowardice). How long does the Kenyan think he can continue bamboozling the American public by patiently sitting down with the Republican leadership time and time and time again, willing to teach dutch uncle lessons in fiscal responsibility to our nation's most deservedly vulnerable? Luckily, after 2 1/2 years the Republican Party is wise to the wily Kenyan and have bravely walked away from his dastardly tricks not once, not twice but thrice!

Lord knows I'm no Milton Friedman or Ben Stein but I don't have to be a graduate of the Chicago School of Economics that had successfully overthrown countless Marxist regimes to know that the answer to our problems is not to add money to offset the deficit but slash, hack, chop and burn off the excess. The excess is, of course, entitlement programs sucked off of by people who expect a living after 5 decades of hard work and affordable health care as enjoyed by Congressman Ryan and Speaker Boehner.

Who do these entitlists think they are in asking for billionaires to pay a higher tax rate without they themselves being prepared to sacrifice??? Isn't it enough that this poor man is paying over half what his executive secretary pays in income taxes? My God, the 35% corporate tax rate is already so prohibitively high that many leading American corporations have to bite the bullet and flee our shores in search of cheaper labor to escape the radical left wing tax-and-spend agenda of the Kenyan and his cronies.

That would include arch Liberal Nancy Pelosi, who cleverly tried to lull the GOP into a false sense of security by taking impeachment of the Bush War Heroes off the table as well as a public option for that government takeover aka ObamaCare to suck off health care lobbyists before calling for a public option yet again.

So how dare Obama and his Socialist henchmen ask for an additional $40 billion in tax revenue per year over the next decade when corporations this year alone are barely getting by with a paltry $1.66 trillion in profits in the 3rd Q of 2010? Sweet Milton, these same captains of industry can certainly be excused for hoarding their last $1.6 trillion in cash reserves and not using that money for hiring. And by the time Obama gets done with his fascist takeover of private industry, that $1.6 trillion won't be enough to buy a copy of liberal Ben Affleck's Gigli on VHS.

Any fool can see that everyone from those on welfare to the middle class does not want higher taxes on the wealthy. Poll after poll after poll after poll (especially in swing states) bears this out. Only those on unemployment may call for this job-killing tax agenda of the liberals because if tax cuts were to continue, then corporations may decide to stop going through the foreign labor pool or predatory temp agencies and, (gasp!) offer them a job!

So huzzah, Chairman Penis, for calling the Obama administration out for what it is: a bunch of petulant, spoiled babies who cut and run without cutting anything significant from the budget nor running the nation as the corporation as our Founding Fathers had intended.
0 comments