Brilliant Recent Posts
It's a Sarah Palin world, we just are allowed to l...
Amerika: No dancing allowed
In non-Sarah Palin-related news...
Saturday Big Blue Smurf Blogging: What They Said
I want these two kids to meet up in college, get m...
The Daily Weiner
You know, Sarah, you can take something for that
A High Fly Into the Stands
You can't vote to keep subsidies to Big Oil and th...
And I'll bet he doesn't tip, either 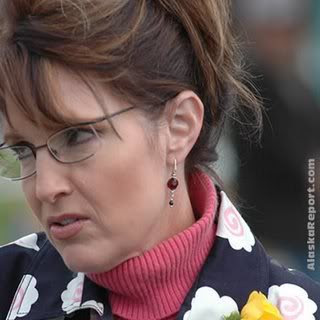 If any more Republicans join the 2012 presidential race in this upcoming political Special Olympics, they may just put the Onion out of business. Birther king Donald Trump reminded us why we loathe him so much for the double comb-overed, pussy-mouthed misanthrope he is and before his candidacy was even announced, it crashed and burned like a Hindenburg still tied to its mooring lines.

Mike Huckabee is so boring he's not even good for laughs but he announced he wasn't interested in the presidency after being told it was mutual among the electorate.

Then there's Newt, good ole Newt, who before and after his candidacy was announced hoarsely screamed about a mosque at Ground Zero, claimed that his love for America made him fall into vaginas that weren't between his wife's legs and called the president an anticolonial Kenyan. Newly anointed as the most allegedly credible GOP candidate, Newt just couldn't live up to that elevated status and before long his spokesman came out with some of the worst poetry this side of The Stuffed Owl and tried to defend then sweep under the rug an old $250,000-$500,000 no-interest Tiffany's loan. The former Speaker then tried to claim he was a Washington outsider. The only commonsensical thing that's come out of his mouth was when he called Paul Ryan's Medicare "plan" "right wing social engineering."

Now even the Republican Party, starting with el Rushbo, hates his guts and it's obvious the Great Apostate lost all GOP support now and forever.

But what we're seeing with the unfolding Sarah Palin soap opera is unprecedented in American history. Never have I ever seen a failed Vice Presidential contender continue to be the focal point of so much blind, misguided and even sick and obsessive interest. At times, even the former Alaska governor seems to be taken aback and even scared by it, jealously guarding her privacy. And who could blame the lady?

But over the last 33 months since John McCain inexplicably named her to be his running mate, anyone even remotely connected in the most tangential way has been chased by literary agents and had multimillion dollar book contracts and TV appearances and whole series catapulted at them. Bristol Palin herself made more than $200,000 last year alone and the Palin family's yearly income from just reality TV was $3,000,000 last year. Even Levi Johnston, a 21 year-old unwed hockey dad, is making 6 figures and is coming out with his own memoirs.

Call her and her entourage Jerry Farcia and the Grateful Deadheads but Sarah Palin, whether or not she intended to, is sending Tea Baggers and others with too much spare time scrambling for Civil War battlefields like Gettysburg merely on the strength of a quote she'd used from the Gettysburg Address.

But flocking to Civil War battlefields out of morbid and idle curiosity is something we used to do during the Civil War. We've all heard stories of the landed gentry literally having picnics on the outskirts of Civil War battlefields during the actual engagements. There's something about watching catastrophe unfolding that's irresistible to humans and perhaps the deer-on-the-headlights phenomena isn't peculiar only to ruminants. Perhaps this accounts for Palin's so-called appeal.

So now those of us in the reality-based community have to play witness to another sad chapter in American History as written by Samuel Beckett, "Waiting for G'Duh", in which Vladimir and Estragon (the American people) wait and hunt in vain for their savior. The problem is, unlike Beckett's Godot, Palin will eventually make an appearance because that is what she does for a living and nothing more.
3 comments

Montana said...
Sarah Palin was so successful as a governor, she graduated early “Bitter Quitter”, she real is a “Dan Quayle” in heels. She clearly loves “dishing it out” but real can’t take it because she loves playing the victim card. Poor thing she fail as a VP candidate (her lie that her daughter was engaged was such a farce), her stand-up comic fiasco on the Jay Leno Show, please, her TV show canceled after declining rating, I guess her perpetual run for the White House is the only thing she can look forward to, but since she is a coward she will only throw small minded rocks, poor thing. Since we already had an idiot “W” that caused our current economic debacle, America knows not to trust the GOP fools who flaunt the idiocy.
5/31/11, 1:08 PM

Anonymous said...
"since John McCain inexplicably named her to be his running mate" ... he chose her because she was the only prospective VP who was shorter than McCain (5'7") and he didn't want anyone overshadowing his farewell tour !
5/31/11, 5:08 PM

Murr Brewster said...
America wants to know how she got on a Harley in a pencil skirt.
6/1/11, 1:28 AM
Post a Comment
<< Home
Contact
Home
Email:
brilliantatbreakfast at gmail dot com
RSS