Brilliant Recent Posts
Jamming Down the Pedal Like He's Never
Everything You Touch You Don't Feel
Businesses I Wish I'd Started
This may not be as silly as it looks on the surface
Chuck Schumer needs to just STFU
Top 10 Inaccuracies re bin Laden's Death
This is your nation under corporatism
Monday morning blues
Bin Laden Was a Liberal
Now this is just mean.


The Decade of the Locust
Posted by jurassicpork | 2:01 PM
(My apologies for the reposting but Blogger was screwing up big time yesterday and it erased everyone's latest posts.) 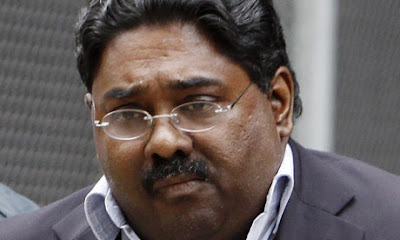 In a saga that could've been entitled Fievel Goes to Wall Street as scripted by Oliver Stone or Nathaniel West and featuring a cast of bipedaled rats, Galleon Securities’ Raj Rajaratnam was convicted yesterday in federal court of all 14 counts of securities fraud and conspiracy. Out of the 26 people named in the indictments, 21 of them would plead guilty and testify against their former benefactor. In another delicious irony, the hedge fund titan was taken down by Manhattan US Attorney Preet Bharara, an Indian native.

When midlevel Intel manager Rajiv Goel decided to crawl into bed with future convicted felon Raj Rajaratnam, he was suffering from a rat infestation in his home. Little did he realize that by doing so, he'd be letting another rat into his homestead, the biggest one of all.

Out of a cast that could've been scripted by Oliver Stone for another Wall Street sequel, Goel is undeniably the most pathetic. Called the "Sad Sack" by the NY Times' Dealbook blog, the other Raj was a hard luck cog in Intel's vast machinery who looked up to the hedge fund superman like evangelicals look up to Jesus, with this one twist: It wasn't the resurrection of his idol that drove Goel's devotion but his own. His post as a middle manager enabled him to share with his old chum insider information such as Intel's earnings statements.

Rajaratnam, a real-life Gordon Gecko in every sense of the word, typified American high finance while remaining well below the radar outside Wall Street's competitive hedge fund community. He flattered and rewarded those who'd helped him amass an ill-gotten fortune worth an estimated $1.3 billion and a portfolio worth as much as $7 billion. But when the ever-pathetic Goel wanted Rajaratnam to take notice of an award he'd gotten at Intel, the latter yawned, prompting the underling to ask, “Does it always have to benefit you?”

But among those in Rajaratnam's vast army of corporate spies, Goel's starry-eyed devotion was not unique. In the small but steadily-growing hedge fund community on Wall Street, the Sri Lankan was revered as some kind of financial Oracle of Delphi, always making the best acquisitions and deals at the best time. And never once did anyone seem to question nor care whether Rajaratnam's fabulous and invariable success could be attributed to insider trading or, in layman's parlance, cheating.

The bin Laden of Wall Street


MSNBC's Rachel Maddow nailed it when she reminded us (using bin Laden's own words) that the terrorist kingpin's major interest regarding the United States was our financial downfall. Using the same exact tactics used by Ronald "Star Wars" Reagan to accelerate the downfall of the USSR, bin Laden also used our own fear, paranoia and the opportunistic instincts of the military industrial complex to bring about our own eventual downfall. The year after 9/11, the Bush administration authorized a defense budget of just over $400 billion. By the time Obama took over, we were already up to well over $700 billion, not counting another discretionary budget earmarked to fight terrorism.

Meanwhile on the home front, Rajaratnam was engaging in more than a little economic terrorism of his own. Whereas bin Laden's plane bombs were merely means to an end that all but guaranteed financial ruin, the Sri Lankan was busy collecting insider information and taking over weak companies with the intention of liquidating its assets.

In Oliver Stone's Wall Street, Charlie Sheen's stockbroker character Bud Fox, desperate to get into bed with Gordon Gecko, gave him a tip involving the failing airline for which his own father worked. Fox's real-life counterpart Smith had a similar airline moment:

In 2005 (Smith) traveled to Laguna Beach, Calif., for the bank’s annual technology industry conference. There an old colleague told him about Integrated Device Technology’s planned acquisition of Integrated Circuit Systems.

He e-mailed Mr. Rajaratnam about the tip with the subject line “the two eyes” — code for the two companies. When the companies announced the deal in June 2005 — bringing Mr. Rajaratnam nearly $3 million in profit, according to prosecutors — Mr. Smith said he felt a tinge of regret.

“I remember after the announcement having a sinking feeling in my stomach that this might be a problem,” Mr. Smith testified.

Most people, I'd like to think, would be more sensitive to conflicts of interest and breaking the rules to get ahead of more honest Wall Street speculators and would feel more than "a tinge of regret." But tweaks of the conscience will get no one anywhere on Wall Street where the business of business is business. In fact, there's a whole book devoted to the Wall Street personality. It's entitled, "Snakes in Suits: When Psychopaths Go to Work."

So why did it take the better part of a decade or more to get this other foreign-born terrorist who plied his trade not in Afghanistan's caves or Pakistan's remote suburbs but openly in our midst, on our soil and using our own financial system for personal gain?

As stated earlier, deregulation during both Democratic and Republican administrations when both parties controlled Congress certainly provides a healthy introduction as to why. It would be a stretch to say that the dismantling of the 1932 Glass-Steagall Act 12 years ago made hedge funds entirely possible. Yet, taking Glass-Steagall off the books certainly did nothing to hinder the creation and monstrous growth of hedge funds since 1999.

US Attorney Preet Bharara and his crackdown on Wall Street aside, it would be easy to use Rajaratnam's crooked exploits in gaming the system as a better argument for immigration reform than the one right wingers have been using for decades. Indeed, it's hard to see how minimum wage-earning Chipotle employees or underpaid, brutalized migrant workers toiling in Florida's tomato fields or North Carolina's tobacco fields (.pdf file) are a greater threat to our economy or national security than a Sri Lankan who stole perhaps billions through insider trading gotten through corporate and even sexual intrigue.

These last ten years on Wall Street have been the Decade of the Locust, with little accountability and even enormous help on several fronts from our government of the people, by the people and for the people. But rather than acting in good faith on behalf of the people who elect and re-elect that government, the only people they're primarily interested in helping are the corporations that are masquerading as people.

Because for every Rajaratnam and Madoff that we put behind bars, there are literally thousands of other people on Wall Street that are doing exactly the same thing with no or little fear of meeting the same fate. Because everyone on Wall Street, and the southern New York US Attorney's office, knows that our economic and financial system is predicated completely on fraud, dirty tricks and deception. They also know if the DOJ were to go after everyone on Wall Street, our nation's economy would collapse within weeks if not days.

It's not that Wall Street crooks are too big to fail. It's the sheer fact that there are too many of them to fail.
0 comments