Brilliant Recent Posts
You Know What You Need to Do
Election Day
Rally to Restore Toll Booths, Gas Stations and oth...
Exactly what Jon Stewart was talking about
The Pied Piper of the Future
Blogrolling In Our Time
Unsafe at any size
I remember.
Happy Rally Day!
Friday Cat Blogging: I love my calendar girl!


Apathetic is as Apathetic Does
Posted by jurassicpork | 12:25 PM 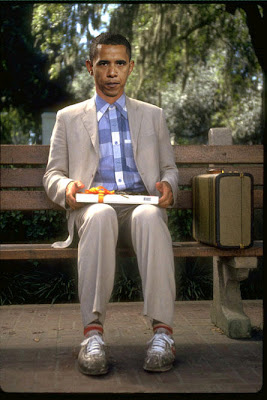 I suppose I should be a gracious loser and express the usual pious platitudes about how great it is to be in a free country, a democracy where every person has one vote. I suppose it's also incumbent on me to respect that democracy, accept last night's brutal results and say, "The people have spoken."

But the people have not spoken.

Most of them don't during your typical midterm, largely because the presidency isn't at stake. Typically, a midterm will bring out anywhere from 30-40% of the vote and last night wasn't much of an exception. The final national numbers aren't in, yet, but I think it would be safe to say that voter turnout last night still didn't get above 45%, if that.

So, no, the people have not spoken. They are the biennial, post-Nixonian Silent Majority.

And these people who'd decided to stay home have nothing to complain about because they forfeited their right to do so by saying home and pissing and moaning about attack ads, dead-catting, mud-slinging and name-calling. At the bottom of all that filth there were still the issues and they didn't dissolve beneath all the muck and mire. The issues, like our unpaid bills and terminal disease, stubbornly remain.

So let's take a look at what we will have come New Year's: With all but 10 House races decided, our only bright spot in the country is that southern New England (RI, CT and MA) made a clean sweep. Add to that Blumenthal's victory over Linda McMahon in the CT Senate race, former liberal Republican Lincoln Chafee winning his Dad's old Governor's seat and Deval Patrick easily winning re-election as Massachusetts' chief executive. We did our part but the same can't be said for the rest of the country.

At this moment, Republicans now have 240 House seats and almost took the majority in the Senate. And, most disheartening, while we lost liberal icons Russ Feingold and Alan Grayson, not one Republican incumbent of any consequence lost their seat in either chamber. Even Lisa Murkowski, as one of 1600 qualified write-in candidates in Alaska, beat Joe Miller by 7 points. Yes, Joe Miller was so repulsive to even right-leaning Alaska, that "One of the 1600 above" was preferable to him.

Meanwhile, we now have psychopaths like Marco Rubio and Rand Paul about to enter the Senate and we were treated to presumptive House Speaker John Boehner weeping before a plexiglass podium like a bi-polar Oompa-Loompa.

Here's an idea: We ought to make an Act of Congress that permanently rescinds your right to vote if you sit out two elections in a row. How one can call oneself an American while refusing to vote yet whining about who gets in, who gets tossed out while accepting federal benefits in a countless variety of ways is loathsome, despicable and ought to be grounds for a recission in citizenship or at least some of its benefits.

And while the will of the people who did vote ought to be respected, since voting is the very heart of a democracy, one must nonetheless marvel at the sheer disconnect, the panic and the absolute fingers-in-the-ears, head-shaking, stubborn ignorance that went with sweeping back into power the Republicans, the very same people who'd gotten us into this mess, the very same party whose entire strategy boils down to, "Less regulations, less taxes and No to everything Obama wants."

And when the inevitable gridlock get us even less reform and protection over the next two years, we're going to take it out on Obama twice as mercilessly as we did last night. And, like the last midterms in '06, voter dissatisfaction had victimized the President's party as if the legislative and executive branches were the one and the same.

Except in '06, we at least had a point. This time around, we didn't. And many of us chose to stay home.

Russ Feingold stood up to Obama and his excesses in Afghanistan and foot-dragging in Iraq. So did Alan Grayson, who also stood up to the evil banks and the Fed. But Russ Feingold and Alan Grayson didn't lose to other men: They lost to ultra right wing corporations too ashamed and cowardly to admit who they were financing. They lost to the US Chamber of Commerce that openly champions hollowing out the American workforce by outsourcing jobs to foreign countries that pay pay them "dues". They lost to the US Supreme Court and their stupendously brazen and pro-corporate decision named, ironically, Citizens United vs the FEC. Consider last night's results a test drive for Citizen's United in 2012.

The citizens of this country have been anything but united since 9/11 and the SCOTUS's decision only proves that even 45% of our citizens united with the common desire to vote is no match for a handful of corporations and their political arm in the Chamber of Commerce.

You have only yourselves to blame and I have nothing but withering contempt for every single last one of you.

You just put back in power a party that is largely if not entirely responsible for everything that is wrong with this country, as if the GOP learned their lessons from their "thumpin'" of four years ago and will finally get things right this time, as if this wasn't the party that also voted for the bailout that allowed executives to resume handing each other billions of our tax dollars as bonuses, the GOP that called you a bum for needing UI extensions because your job was outsourced by them to Asia or Mexico, as if the GOP actually has a plan to help you keep your house after that same party repealed Glass-Steagall (with new Senator-elect Pat Toomey's help) and took away your right to file for bankruptcy.

The same party that started needless and illegal wars in Iraq and Afghanistan to no appreciable benefit to either of our three countries and eventually cost us trillions bloating the military-industrial complex, the party that wanted to deport over 11,000,000 hard-working brown people, wanted to spy on you without FISA court warrants, that strive to make our children more ignorant in schools, to make abortion illegal even in cases of incest or rape, the same party that is bound and determined to remove the very last sinew of regulation on any industry even as they're polluting our ecosystem and killing us. The same party that demonized African Americans after Katrina, wounded veterans when their neglect was revealed and the newly unemployed and homeless when they understandably looked to our government for help.

These are the people to whom you've handed back the keys to our seat of government. We took a half a step in the right direction away from the Bush-era fireball of failure and are now about to take ten steps back into the Low Dark Ages. They have learned nothing, never will learn anything and months ago were already vowing to impeach our president for spurious reasons and to block his every objective that isn't named after Afghanistan.

Bravo. Well done. And I hope you all rot in the hell you've just accelerated. Because if you thought this midterm election was brutish, long and nasty, imagine what things will be like in two years.
4 comments

Nan said...
Speaking of impeachment, do we what to bother pretending we don't know what's first on the agenda for the Republican House?
11/3/10, 2:16 PM

Litzz11@yahoo.com said...
Prior to announcing their respective candidacies, Meg Whitman and Carly Fiorina famously were outted as non voters. Whitman didn't even register until 2002, and her voting record was spotty after that. Fiorina didn't vote in 15 out of the last 22 elections.

My suggestion: let's first make candidates who hold our democracy in such contempt that they can't even be bothered to vote ineligible from holding office. It seems only fair.
11/3/10, 9:17 PM

Jill said...
I can't help but have a sense that while this is awful, it may only be short-term awful. Now we will see if this truly is a nation of teabaggers, or if the people who talk about the Constitution but can't identify correctly anything in it; the people who talk about government spending but don't you DARE touch Social Security, Medicare, or defense spending (which constitute together 94% of the budget); will be horrified when they see what their votes hath wrought.

While the Republicans exult today, they now own at least a piece of what they now do. And in 2 years, when (not IF, but WHEN) unemployment is still over 10% because the corporations they adore will STILL outsource all the jobs, these same Americans who have the attention span of a gnat will vote-by-temper-tantrum again. And so it will go, back and forth, back and forth, until our nation dies of its own entropy.
11/3/10, 10:04 PM

jurassicpork said...
Well, I understand that Obama's already holding a lit match to the part of the Democratic carcass (understandably confused with the Democratic caucus) that hasn't been immolated by signalling he'll listen to GOP proposals to keep the tax cuts for the wealthy on the table.