Brilliant Recent Posts
The News at a Furtive Glance
Let's hear how they plan to cut over a trillion do...
If the teabaggers are so sure they're right, why d...
Somehow I think the only thing Joe Miller DOESN'T ...
Iraqi Government Still Paying al Qaeda to Kill Our...
The Silly Season
Why Sesame Street is still awesome
If Obama does this, we'll know he's a Republican p...
Because nothing says "Great American Patriot" like...
The Lost Boys Meet the Dirty Dozen


A demand for an apology is not "reaching out"
Posted by Jill | 7:29 PM
It's hardly surprising that Ginny Thomas would pull something fucked up like this; after all, what would you expect from someone who would marry Clarence Thomas?

Virginia Thomas, the wife of Associate Justice Clarence Thomas of the Supreme Court, left a message last weekend on the voice mail of Anita Hill, who accused her husband of sexual harassment during his confirmation hearings, a spokeswoman for Ms. Thomas confirmed on Tuesday.

“I did place a call to Ms. Hill at her office extending an olive branch to her after all these years, in hopes that we could ultimately get past what happened so long ago,” Ms. Thomas said in a statement provided to The New York Times.

“That offer still stands,” her statement went on. “I would be very happy to meet and talk with her if she would be willing to do the same. Certainly no offense was ever intended.”

Ms. Thomas did not explain why she had reached out to Ms. Hill at this time. Ms. Hill did not respond to calls to her office at Brandeis.

While Ms. Thomas described the call as an attempt to reach out, the university appeared to be taking the matter more seriously.

Andrew Gully, senior vice president of the Brandeis University communications office, confirmed that Ms. Hill had received the message and that she had turned it over to the campus department of public safety. That office, in turn, passed it on to the F.B.I.

ABC News quoted from the voicemail:

“Good morning, Anita Hill, it's Ginny Thomas,” it quoted from the voicemail. “I just wanted to reach across the airwaves and the years and ask you to consider something. I would love you to consider an apology sometime and some full explanation of why you did what you did with my husband. So give it some thought and certainly pray about this and come to understand why you did what you did. Okay have a good day.”

Ms. Thomas has long been active in conservative circles in Washington, and in the past year has rose to greater prominence as the founder of a new nonprofit activist group, Liberty Central, which opposes what she characterizes as the leftist “tyranny” of the Obama administration and Congressional Democrats.

Her activities with the group have raised questions of judicial ethics because the group, which pays her, has accepted large contributions from unidentified donors. She began the group with two gifts of $500,000 and $50,000 from undisclosed contributors, tax forms show.

I'm sorry, but demanding an apology is not "extending an olive branch." Ginny Thomas is just another teabagger throwing her weight around. I would regard it as a threat too if I were Anita Hill.

UPDATE: I'm not the only one who pointed out the absurdity of the notion that this was "reaching out." Google News still shows references to the Times' original headline: 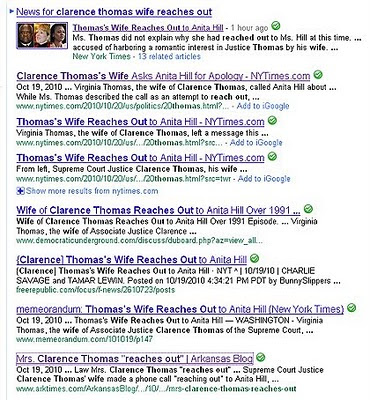 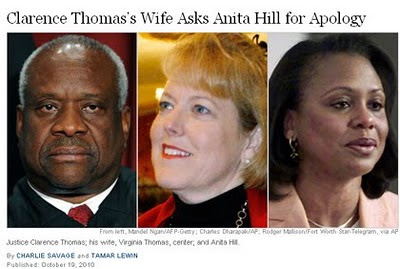 Jill said...
Ginny Thomas is not black, she is white. Take a look at the photo I just posted. Anita Hill is on the right. Ginny Thomas is in the middle. Funny, too, how the Times changed its headline.
10/19/10, 9:13 PM

tata said...
Ms. Thomas has long been active in conservative circles in Washington, and in the past year has rose to greater prominence...

The Precious said...
Who edited it?

Anonymous said...
To be fair to Ms. Thomas, her asking Ms. Hill to consider an apology is hardly a "demand," either. The request itself is plenty odious, without sensationalizing it.
10/21/10, 8:09 AM

Repubanon said...
Typical Republican tactic: the "demand an apology" ploy. If the Democrat is dumb enough to issue some "I'm sorry you took it badly" apology, Republicans claim it "validates" the Republican position and shows the Democrats as "weak."

If the victim refuses to apologize, Republicans claim that it shows dificult their opponents are to work with.

Ever notice how Republicans refuse to apologize for their transgressions, no matter how vile?
10/21/10, 8:20 AM