Brilliant Recent Posts
Blaming the fat chicks again
The American "Disappeared"
How could she?!?!? And at such a time, too!!
The News at a Furtive Glance
Some things are inevitable
Disinherit the Windbags
Let Us Speak of Pheasants and Peasants
Whatever you might think of Mike Bloomberg in gene...
My head just exploded. I hate when that happens.
This is the future of the American worker

Kathleen Gustafson: You swore on your precious Bible that you would uphold the interests of this state, and then when cash was waved in front of your face, you quit.

Sarah Palin: OH, you WANTED me to be your governor! I’m honored! Thank you!

Shannyn Moore, Homer, Alaska resident, posted on the Huff Po the exchange between Palin and fellow Homer resident Kathleen Gustafson. (The cell phone video, typically, has poor sound quality, so a transcript of their brief conversation can be found here.)

Moore gives a pretty comprehensive account of the day's events but here are the abstracts: When Gustafson found out that Palin was going to be filmed in her hometown pretending to do something that Gustafson's family does for a living in real life, she decided to make and hang a 3 x 30' banner sign reading "WORST GOVERNOR EVER" so Palin and her TLC enablers couldn't avoid it.

Little did Gustafson realize that it would get Palin's attention so easily.

The exchange was testy on one side (Gustafson's) while the other side blathered on about our troops defending our constitutional protections that either her or TLC's goons were in the process of violating three-fold (1st, 2nd and 4th amendments) by having security pat down Homer private residents on a very public dock.

The epigraph above pretty much delineates the sheer distance between the two minds and the usual Republican aversion to any camera that doesn't belong to Rupert Murdoch is in evidence as Todd Palin continually tries to block the camera, walking around in circles like a peripatetic, brain-damaged bouncer at an Anchorage gin mill.

Despite the fact that the banner sign read "WORST GOVERNOR EVER", Sunny Sarah insisted on thinking, "OH, you WANTED me to be your governor! I’m honored! Thank you!"

As Moore points out by using Sarah Barracuda's latest Facebook dispatch, she's equally clueless about the halibut that she was pretending to fish for. Palin also rolled her eyes when she realized she was engaging in a war of wits with an armed person, namely a teacher (we all know in what high regard teachers and boards of education are held by Republicans). 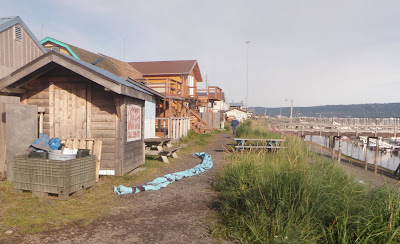 Regrettably, the cell phone video doesn't show the banner sign being torn down by one of Palin's thugs nor the people of Homer, including those who actually do make their livings on the docks, getting patted down by private security.

Let's face it. At some point we all hated high school at some level, for some reason. There's someone in each of our pasts that we loathed and for me this Sarah Palin monster that John McCain created reminds me of every head cheerleader or Beautiful Girl who ever took a well-timed insult or appraisal into some positive that's unmoored from reality, someone who thinks that by merely repeating criticism with a sneering tone of voice is enough to defuse or deactivate it. 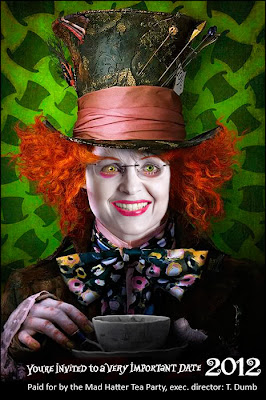 We saw it in her recent speech at Stanislaus where she insulted the liberal media for bringing up her bendy straw demands in a copy of the contract that was found in a dumpster. We heard it before that after "the liberal media" got a shot of her hand notes at the Tea Bagger rally in Tennessee.

And heard it again in Homer where Sarah tried to put words in Kathleen Gustafson's mouth and making it sound as if she wanted her to remain on as Governor despite the enormous 3 x 30' foot banner that said "WORST GOVERNOR EVER". Then, in a bizarre turn of mind, Palin seemed to deny being a celebrity in spite of being on the docks being filmed by TLC fishing for halibut with her well-manicured hands.

If you're not a celebrity, Sarah, then why did you show up at the gifting suites at the Academy Awards last March? Or did you think your as-yet-to-be-filmed spots on Fox and The Learning Channel qualified for some kind of television Oscar? What's with the demands for bottled water, bendy straws and, oh yeah, limousines, private jets/first class air fare and five star hotel rooms every time some idiotic right wing organization or celebrity-starved university ponies up 6 figures to hear you spew sewage for an hour about President Obama, Democrats and the liberal media?

Sarah Palin is helping to turn this country into one massive high school, which was, at best, an unrelenting popularity contest predicated not so much on academic achievement or talent as great hair, great skin, great teeth, sexual chemistry and a ruthless instinct for petty personal politics.
6 comments

Freedom Fighter said...
Sarah Palin hates teachers? LOL! What do you think her parents did for a living?

I know a little bit about Kathleen Gustafson. She hates Governor Palin because she was turned down for a state job.

Anonymous said...
Well, we all know Ms. P. is a case of narcissistic personality disorder. Unfortunately, in the infotainment culture in which we live, it will carry her far (God help us).
8/9/10, 2:55 PM

mandt said...
"not so much on academic achievement or talent as great hair, great skin, great teeth, sexual chemistry and a ruthless instinct for petty personal politics." Perfect description of a momma grizzly, except one should remind the base that mommy grizzly's seldom bath, stink to high heaven and often eat their their young. Oh, and you could paint the entire outline of Alaska in red on one of their claws.
8/10/10, 8:46 PM

mandt said...
The answer to every question by mean girl beauty queens, is the irrefutable: " I know you are, but what am I except except totally fabulous?"
8/12/10, 4:12 PM
Post a Comment
<< Home
Contact
Home
Email:
brilliantatbreakfast at gmail dot com
RSS