Brilliant Recent Posts
Princess Sparkle Moose Hits Homer. Homer Hits Back.
Blaming the fat chicks again
The American "Disappeared"
How could she?!?!? And at such a time, too!!
The News at a Furtive Glance
Some things are inevitable
Disinherit the Windbags
Let Us Speak of Pheasants and Peasants
Whatever you might think of Mike Bloomberg in gene...
My head just exploded. I hate when that happens. 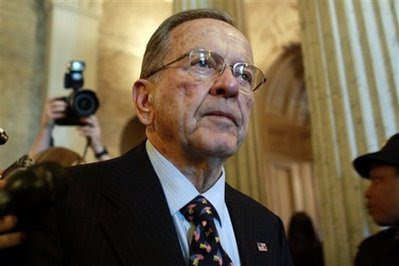 A small plane carrying nine people crashed sometime today in southwest Alaska. Among the passengers were former Alaska senator Ted Stevens, who was unseated in 2008 by Democrat Mark Begich, and former NASA Administrator Sean O'Keefe. O'Keefe briefly became the face of NASA when the space shuttle Columbia disintegrated and crashed in Texas in early 2003.

The most recent reports state that five were killed and four survived. Mr. O'Keefe is reported to have survived but former Senator Stevens's death has been confirmed.

Our thoughts, prayers and best wishes to go the victims and their families.
4 comments

If you can't say anything good don't say anything at all. The above sentence references myself and what I would have said regarding one of the passengers.
8/11/10, 12:05 PM

mandt said...
I think it was Alice Roosevelt who said that speaking ill of the dead was the only spectator sport worth engaging....
8/11/10, 4:54 PM