Brilliant Recent Posts
Democrat With Balls
More casualties of state budget crises
You're Never Too Old to Fail
Snooki is a rocket scientist compared to Iowa Repu...
Meanwhile, back at the Fall of the American Empire...
Heroine of Normal-Sized People Everywhere
Sure, because inflaming religious tension is a gre...
Dispatch from Topsy-Turvy Universe
Will the Real GOP Psychopath Please Stand Up?
Tony Hayward is getting his life back


The (Republican) Terrorists Have Already Won
Posted by jurassicpork | 11:40 AM 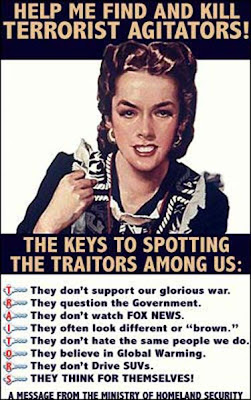 If one looks at SB 1070, Arizona's Gestapo-esque immigration law that went into effect yesterday despite a federal judge striking down key components of it, with clear eyes and takes note of all the fallout that's resulted, one realizes that the Arizona GOP actually got everything they ever asked for and probably a good deal more.

True, this explosion of hatred toward Latinos legal or otherwise, has had some less than salutary effects on the state's economy. But those repercussions will not be felt by the state GOP lawmakers but the average small business owner and landlord.

The benefits that the GOP is already seeing is the mass exodus of Latinos both legal and illegal, who have been leaving Arizona by the thousands. Who will actually suffer from this? Democrats who have come to rely on this same Latino voting bloc's reliably Democratic votes.

They also succeeded in making Arizona a lot whiter in a big hurry and without placing much of a burden on the state's limping economy and the state's penal system.

When SB 1070 was ratified in the Arizona legislature, 11 other states followed suit and either ratified or introduced legislation that would enforce similar measures against immigrants. The Arizona Republican Party is metastasizing.

Hell, even Judge Susan Bolton's highly critical ruling of SB 1070 has been hailed as a "huge victory" by the same whackjobs who'd co-authored it because Bolton couldn't or wouldn't completely eviscerate it.

And if you want to know how insanely xenophobic white Republicans have gotten, Iowa Republicans, I shit you not, want to strip President Barack Obama of his citizenship, hence get him thrown out of the White House, just for winning and accepting the Nobel Prize. They're basing this on a proposed amendment (the original 13th amendment, not the one that banned slavery) that failed in Congress exactly 200 years ago.

This is their platform, people, and we're letting it pay dividends. There's really no downside to the GOP's starkly batshit insane and irrational fear of brown people. Like the Bush administration was fond of saying, if we give in to fear, then the terrorists have already won.

Then they scared the shit out of us and it paid billions in dividends to war contractors. We let them steal our constitutional protections, our civil liberties eight years ago and we still haven't gotten them back.

Well, the terrorists have won again and they triumphantly rode in on a snow-white elephant.

Anonymous said...
I find it incredibly hard to believe that anyone is going to vote based on the issues.

Nan said...
The bullshit in Iowa goes back to the Repugs being so incredibly dumb and willing to grasp at straws to support their racism that they refuse to admit there's a difference between "Nobel" and "noble." Like you, I weep for a country where stupidity and hate seem to be winning.
7/31/10, 9:55 AM

jurassicpork said...
Man, you guys should see the firestorm that was touched off in the crosspost over at OpEd News. Most of the posts there don't get any comments.

Mine's generated 57 and counting. And most of them are pretty condemnatory. Its amazing how many stupid and ignorant people troll that place.