Brilliant Recent Posts
The (Republican) Terrorists Have Already Won
Democrat With Balls
More casualties of state budget crises
You're Never Too Old to Fail
Snooki is a rocket scientist compared to Iowa Repu...
Meanwhile, back at the Fall of the American Empire...
Heroine of Normal-Sized People Everywhere
Sure, because inflaming religious tension is a gre...
Dispatch from Topsy-Turvy Universe
Will the Real GOP Psychopath Please Stand Up? 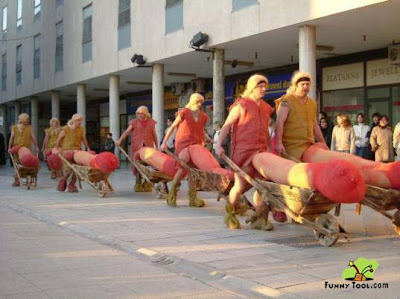 First of all, Im neither Republican or Democrat. But it amazes me that you say the GOP got everything they wanted as far as the immigration law. You say Arizona is going to get whiter??? You're an idiot. If you and others fully understood that our country has a damn problem from immigrants coming here illegally. It dont matter what country they come from, they're a drain on our economy and finances. They also bring diseases to our people! We can't afford to take care of them and their taking of jobs that Americans could have!!! I wish all states followed Arizona's lead and told the Feds to fuck off!!! - actual email sent to my inbox on OpEd.

It's like a penis parade with electric vuvuzelas amplified by 100 watt Marshall amps. And, once again, JP has brought them out of the woodwork without even trying.

My last article, crossposted on Op-Ed News, the hard-hitting liberal, progressive news and opinion site that's become my summer home this month, has been promoted to headline status. If you go to their index page, you'll note that "The (Republican) Terrorists Have Already Won" is the story that's second from the top, well above the "fold."

The reason for this is the number of hits it must have gotten (although I have no way of tracking that) plus the comments it's generated (47 57 to date). As well as pieces by citizen journalists and bloggers like me, it features original pieces and crossposts by luminaries such as OpEd founder Rob Kall, Danny Schechter and Robert Parry. You'll note that articles far better than mine go, half the time, without generating a single comment. The other half of OpEd's articles get single digit comments.

My 391 word article, which started off as a rambling series of off-the-cuff comments said to Mrs. JP at a coffee shop, eventually crystallized into a brief blog post that I decided to cross-post on Rob Kall's site. It was grabbed more rapidly than anything else they ever accepted (within a half hour) and got linked on Buzzflash almost as quickly. The comments started pouring in immediately, especially when Rob Kall decided to immediately front-page it.

It got to the point where I was spending all my preciously limited internet time reading and responding to the comments. This morning, I found dozens more. I still haven't read them all. But I will make some observations:

If one is adventurous enough to regard this response as a bellwether of what issues will be hot during the midterms, then one will conclude that immigration suddenly just got very, very sexy. But what else can account for this massive (and surprisingly negative and critical) response to my post on SB 1070? Am I the first person to have written about immigration or SB 1070 on OpEd News? Uh, hardly.

Then again, it may have something to do with the provocative title, "The (Republican) Terrorists Have Already Won." Ah, there's the rub and the rub goes the wrong way. Now I know how Janet Napolitano felt when Homeland Security released their report on the rise of right wing terrorism and she was assailed by every Republican bed sheet-wearer in the land.

Now, my comments are being flagged for being partisan (on a liberal, progressive site) and abusive. I've been called a racist (someone with two biracial sons) and I even have a concern troll who presumes to tell me, me of all people, how to write and respond to others. Rob Kall responded by not only front-paging my crappy little article but elevated it to the top of the index page. It's bringing traffic to his site. I've done my job.

But it's not only notable that it took a post about immigration to elicit such a response but one that, justifiably, charges the Republican Party and its apologists with racism. It's brought out all the crazies that troll OpEd News more regularly than I suspect even Rob Kall knew.

And all because I spoke the truth. Not an opinion, but the God's unflyblown, ineluctable, incontrovertible truth: SB 1070 is rooted in racism, something every Latino schoolchild can see with one eye closed. If it wasn't about racism and fear of people darker than us, then how come the immigration debate is completely about the southern border and not the northern border near Canada, through which far more national security threats have been intercepted than Mexico?

The response that my post has gotten, with some people actually sympathetic to the Iowa Republican Party's laughable attempt to strip President Obama of his citizenship just for accepting the Nobel Peace Prize, is a microcosm of what Glenn Beck said about Obama being a racist who doesn't like white people.

Well, neither do I. My people have been a locust swarm, a pox, pestilence and plague on the planet earth. I loathe stupid white men with a burning hatred and resentment for turning our world into the fetid cellpool of oily, polluted opportunism that it's become. I am living in, literally, a different nation than the one in which I grew up in the late 70's/early 80's. Manifest Destiny, obviously, isn't aimed at just dark-skinned people, anymore.

And the racist scumbags who wrote, ratified and signed SB 1070 into law, are also largely stupid white men who pontificate about Mexicans taking jobs that white people don't want to do. But taking harvesting jobs away from respectable white folks like us isn't what SB 1070 is about. It's not about driving away the illegal immigrants who nonetheless pour billions each year into the Arizona state economy and still pay taxes without getting what they're paying for.

It's about driving out the legal ones who vote Democratic, as Greg Palast reminded us last April. And, as I stated yesterday, SB 1070 had worked beyond their wildest dreams: Tens of thousands of Mexicans, even ones here legally, have been forced to leave a land that had once belonged to their ancestors until we stole it from them in the early 19th century. And they're taking their votes with them.

SB 1070, among other things, requires everybody (meaning those with dark skin) to carry papers on them proving citizenship. Even if one is a legal immigrant, not having those papers on them is in itself a crime.

How is this in any way, shape and form not reminiscent of the Jewish ghettos of Nazi eastern Europe? How comes we're not so concerned about Swedish immigrants in Minnesota or the Dakotas or the Polish immigrants of Michigan? Or Italian immigrants in the North End of Boston or Rhode Island?

It's aimed at Hispanics and, audaciously, Native Americans who were here before everyone else. And we're supposed to believe this is a debate about economics? If that was true, they would've thought twice about passing a law that was guaranteed to crater a state economy by depriving it of much of the $29 billion poured into it by Latinos and other immigrants (about 8% of its economy).

If it was about what was legally viable or not, they wouldn't have passed a racist law that requires dark-skinned people to carry citizenship papers with them 24/7 (do you?), one guaranteed to be challenged and struck down in federal courts. If they wanted to remain true to the spirit of the law, they could've continued with 287g, that allows the federal government to deputize state and city law enforcement agencies to round up illegal immigrants.

Oh wait. That was taken away from Sheriff Joe Arpaio, the racist scumbag whose tent city in Maricopa County had become a national disgrace, a place in which the almost exclusively Mexican Americans die and suffer from lack of medical care.

Yet to hear the scumbags who are commenting on my article, whatever horrors we can visit on these people or allow to happen to them they brought on themselves. Because they broke the law.

Well, so did Bush, Cheney, Rumsfeld, Karl Rove, Alberto Gonzales and thousands of other crooks, liars and war criminals and you don't see those douchebags getting deported to the Netherlands to stand war crimes trials. No, they're richer than ever and are getting signed to one book and TV deal after another.

So spare me your fucking pieties about what's legal and who deserves what.
2 comments

Mike McCracken said...
Alas, the truth hurts, particularly for Republican/conservative zealots. Unfortunately they are and have been at their wits end having a black man as president. They cannot fathom how that happened as cannot many other Americans.
5 years ago most people would have predicted a white woman would be president long before a black man. Since Barack Obama has been elected and is serving as president, they have to resort to ALL tactics to make sure that does not happen again. This includes going against all sectors who voted for him as well as rejecting all bills (including those with Republican tenets such as tax cuts)which the president endorses.
Your article pointed out their racism- a point they cannot allow to be accepted as truth.
If people start believing the truth, Democrats would not only NOT lose seats, they would win almost all available seats. Keep up the good work.
8/2/10, 10:04 AM

Anonymous said...
E-mail: "immigrants bring diseases with them...drain on our economy and finances..."

Well, damn. Both my parents were immigrants (my Dad was an actual rocket scientist.Really). Guess they shoulda slunk their disease-carrying, parasitical carcasses back to where they came from... and taken me with them....
8/5/10, 5:18 PM
Post a Comment
<< Home
Contact
Home
Email:
brilliantatbreakfast at gmail dot com
RSS