Brilliant Recent Posts
Is there nothing this president won't sell us out on?
The Republicans will attempt to rewrite history. ...
From Baghdad With Blood: The Long, Strange Trip of...
It is conservatives who are emboldening the enemy
Hoarding anything means you can't find what you need
Byron Dorgan, Chris Dodd to Retire, Jeopardizing 6...
Wednesday Big Blue Smurf Blogging: Cover your key...
It may not be "fair", but yes, Democrats DO have t...
Welcome Back to the Bronze Age of Intelligence
Are they REALLY going to go there? 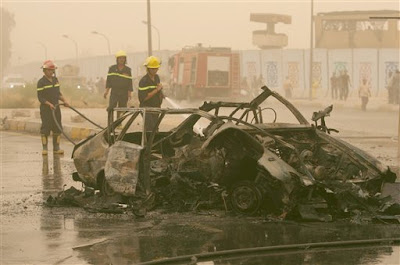 There are two types of large numbers we ought to be concerned about regarding Blackwater Worldwide: The large numbers in the contracts we're handing out to Erik Prince like boxed Christmas cards and the large numbers of people they've murdered with (so far) complete impunity.

Several questions stand out about Blackwater, now cowering under the new brand name Xe, going after what is potentially a billion dollar Pentagon contract to train Afghan police forces.

The first question goes to that 31% of the Pentagon that isn't corporately-generated and it's this: Don't you read the fucking newspapers?! On New Year's Eve, five Blackwater mercenaries were let off the hook for killing 14 of the 17 Iraqis who were slaughtered at Nisour Sq. in Baghdad September 16th, 2007. The Iraqi government, enraged by the judge's excessively liberal ruling that was predicated not on a disbelief of guilt but a technicality, immediately countered with a hefty civil suit which Blackwater then immediately settled out of court (a settlement that a Blackwater executive crowed was "an absolute bargain" for the soldier of fortune corporation).

Days later, it was announced that two more Blackwater mercs were arrested and charged with the murder of two Afghanis and the wounding of a third May 5th of last year (the two men in question, Justin Cannon and Christopher Drotleff, were supposed to be training Afghan military forces).

Secondly, if Blackwater is one of the few "security" companies in the world who can fulfill the function that we apparently no longer can, if Blackwater is being kept in Iraq despite getting kicked out by the Iraqi government as of May of last year, then doesn't that qualify as a violation of antitrust laws? Or does Blackwater's countless smaller subsidiaries give them immunity from being broken up as a monopoly? Where the fuck is the Federal Trade Commission, the government office that's supposed to step in and break up monopolies?

And why am reading ridiculous statements such as this?

Charles Tiefer, a professor of government contracting at the University of Baltimore Law School, says Xe's foothold in Afghanistan could give it an edge over other competitors. And defense officials considering bids for the police training work may pay more attention to Xe's resume in Afghanistan than as a security contractor in Iraq, he added.

Are Defense Department officials stupid enough to think that they'd be contracting a completely different company just because we're talking about Afghanistan and not Iraq, that their new brand name is Xe and Prince abdicating his position as CEO means they deserve a second chance and new lease on life?

A quick review of the many instances of Blackwater's behavior: Illegally taking point in combat scenarios (such as in Fallujah in 2004 in which Blackwater mercs were barking orders at a US Marine). Murdering 17 civilians, shooting some of them in the back when they tried to flee and using a gunship in Nisoor Sq. Murdering an Iraqi bodyguard during a 2006 Xmas Eve incident. Six weeks later, the murders of three more Iraqis. Proof of gun running, serious allegations from former Blackwater executives of murder committed by Prince himself, tax evasion, evidence tampering, coverups. The list goes on and on and on like the rap sheet of a career criminal with a 110% recidivism rate.

As if that isn't enough, check out this nugget, also from Courthouse News:

They claim that "On or about September 9, 2007, one of Mr. Prince's employees, a man named Evan Liberty, drove through the streets of Baghdad firing an automatic weapon from a port hole of an armored Blackwater vehicle. Mr. Liberty fired without reason, and fired without regard for who might be struck by the rounds.

That was just eight days before the massacre in Nisoor Square and if Evan Liberty's name sounds familiar, it ought to: The oddly-named Liberty was one of the five defendants let off the hook by Judge Urbina for his part in the massacre that took place barely a week later. There's something you never read about in the mainstream media. Liberty was not a victimized bystander in an isolated incident but a rabid mad dog in the middle of an anti-Iraqi rampage.

Liberty and God only knows who else was going on a rampage in the middle of Baghdad killing and wounding innocent Iraqi civilians with automatic fire and then being covered by his company when Blackwater hustled him and the other 4 murderers out of Iraq and refused to reveal their names to Iraqi investigators.

This is a systematic pattern of psychopathic and sociopathic behavior that had only been reinforced and even encouraged starting with officials in the Bush administration and subsidized even more under the Obama administration. It's the logical outcome of placing guys with guns under no accountability whatsoever and giving them enough wiggle room to plausibly claim in one courtroom after another that they're not accountable to Iraqi law nor American military and civilian law simply because they're contractors.

Now, if this billion dollar contract and partial rundown of Blackwater's crimes hasn't already enraged you then look at it this way, Dear Reader: We're about to reward Blackwater and its cold-blooded war criminals with a $1,000,000,000 contract because of the Bush administration's seven year-long failure to adequately train Afghanistan's law enforcement infrastructure.

Time to send them and Xe to China for trial since they claim that they are not subject to our laws because their status as contractors.
1/9/10, 12:12 PM

jurassicpork said...
Please explain to me what kind of a criminal justice system gives them immunity from war crimes because they're neither civilian nor military yet that same system frees them as if they're the victims?

Blackwater essentially is having their cake and eating it, too, and we're footing the bill for all that cake.
1/9/10, 12:24 PM