Brilliant Recent Posts
More Jeremy Scahill, please
That River Twisting Through A Dusty
In Entertainment News...
Good Morning Geniuses; More of the Twittered vers...
Why not just say "It's OK If You're a Republican" ...
We are owed an apology
This is America's future
Matt Taibbi's Last Appearance on Morning Joe...Als...
That's What All the Girls Say
Stating the obvious


Meet Your Republican Party, or I can't believe the Democrats are going to lose seats to these people next year
Posted by Jill | 6:11 PM
This is what happens when you listen to Rahm Emanuel, Mr. President -- or worse, if you yourself believe that the way to enact change is to capitulate to a political party that does this:

“Health care costs have soared,” Herger said. “But I will oppose a public option with everything I have.”

Speakers included several opposed to Obama holding up copies of the Constitution and asking Herger to show where it says Congress has the right to be involved in health care.

Herger said the federal government does have a limited role to play in health care noting, “We do lots of things that are not in the Constitution.”

“There are things we can do with health care, as long as the government is not running it,” Herger said.

One speaker said he could trace his ancestors back to the Mayflower and said “they did not arrive holding their hands out for help.”

“I am a proud right wing terrorist,” he declared to cheers.

“Amen, God bless you,” Herger said with a broad smile. “There is a great American.”

Yes, folks, that is the Republican Party -- a party that defines "great Americans" as people who proudly identify themselves as "right wing terrorists."

If Tim McVeigh were alive today, he would be as welcomed into Republican arms as Not-Joe the Not-a-Plumber is. Because to today's Republican Party, this: 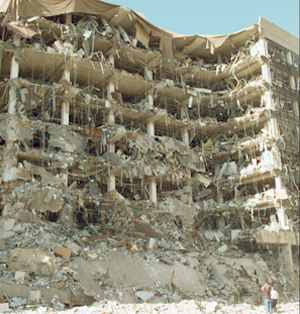 Lotus said...
One speaker said he could trace his ancestors back to the Mayflower and said “they did not arrive holding their hands out for help.”

The actually arrived here as shareholders in a joint stock company in partnership with investors in London, a company that fully intended to make a profit on the enterprise.

Yes, they expected to work (to produce and obtain by trade things that could be sold for profit back in England), but they also expected as part of the deal that their necessities would be supplied by the investors.

And they were more than willing to accept offers of help and advice offered by the natives - and were wise to do so.

(Yes, all of that is historically accurate and based on primary sources.)

So did they "arrive holding their hands out for help?" No - but they did expect they would be taken care of.
8/24/09, 11:36 PM
Post a Comment
<< Home
Contact
Home
Email:
brilliantatbreakfast at gmail dot com
RSS