Brilliant Recent Posts
Signs of Armageddon - first in an ongoing series
Rachel.
Yes, we still need to be concerned about the theoc...
I can't help it...Wingnuts have unleashed my inner...
Heh. "Teabag Obama."
In which Chuck Todd remembers that he has a brain ...
Best. White. House. Photo. Ever.
What if they cried "OMG!! SOCIALISM!!!!" -- and n...
Oh. I thought for a minute Obama was hosting SAM...
Polarizing.


You know, they could have done much to rehabilitate the image of the poodle
Posted by Jill | 7:57 AM
WaPo is reporting that the First Puppy will arrive at the White House on Tuesday, with Wolf Blitzer no doubt becoming a sudden convert to shelter dog activism, speculating on the details that brought said puppy to the White House and whether it was some kind of quid pro quo gift (it isn't) and watching its every move to make sure that Bo, the name chosen for the White House puppy, doesn't do anything unbefitting CNN's notion of appropriate executive branch behavior.

But as we look forward to millions of puppy mill-bred Portuguese Water Dogs in the near future, I have to wonder: given that the Obamas are going to take a hit on whatever they do by the media anyway, and given that the wingnuts already think that Obama is a wuss, why not just take the heat and get a mini or standard poodle?

When I was a kid, we had a miniature poodle named Wooleyburger, after a character on WMCA's Gary Stevens' evening radio show. It was one of those names that five years later you have to explain to everyone what it means and it loses something in translation. But the day I met Mr. Brilliant in 1983, it was the fact that he knew who the Wooleyburger was because he too listened to Gary Stevens as a kid that sealed the deal. True story. But I digress.

Wooley was the best damn dog ever. My mother might disagree, given the late-in-life affinity she developed for Rottweilers (go figure), but Wooley was a great dog. She was smart as a whip, she was energetic, comical, well-behaved, and even suckled our Siamese kitten for six weeks before "weaning" him. When Wooley died at the age of 13 in 1979 after wandering off one night and being hit by a car, the cat howled at night for weeks. Even all these years later, I can't think about Wooley without getting weepy.

Minis aren't the tiny, shaky teacup dogs that you're afraid you'll roll over in the night and crush. A miniature poodle can be around the size of a small beagle, and no one ever thinks a beagle is a wussy dog or a gay dog or anything else. A standard poodle is bigger than a Labrador, and is a regal-looking animal with a poodle disposition. And if you don't give them show clips, but instead just clip the feet, tail, and muzzle, leaving a mustache in the front, they don't look silly at all.

This is a clipped Portuguese Water Dog: 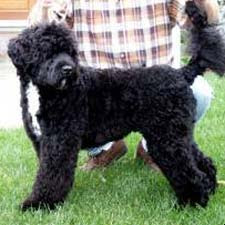 This is a standard Poodle without a show clip: 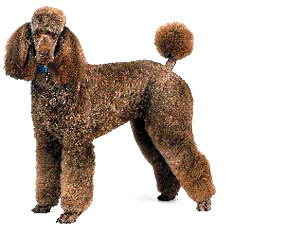 Go to Petfinder and search on "Poodle". You'll find over 100 Poodles and mixes available for adoption.

The only reason to prefer a Portie over a Poodle is the stigma attached to one of the best breeds of dog for a family because of the way they're clipped for shows.

Unknown said...
Jill, are poodles, standard or mini, hypoallergenic? If not, that would explain why a poodle, as well as most other dog breeds, wasn't considered. One of the Obama children (I think it's Malia, but don't quote me on that) is allergic. It was a hypoallergenic dog, or no dog.
4/12/09, 1:57 PM

Jill said...
Yes, poodles are hypoallergenic, as are most breeds that require clipping and don't shed -- such as some terriers as well (like Westies and Scotties, though these are not good family dogs). This doesn't tell the entire story, as an allergy to dander is unaffected by the lack of shedding. But a poodle is every bit as non-allergenic as a Portuguese Water Dog.
4/12/09, 4:22 PM

Zee said...
Almost everyone knows that poodles are hypoallergenic...but Obama-apologists are ever looking for excuses. Jill is dead on...the Obamas could've done a lot to rehabilitate the image of the poodle, but note how poodles were not even on their short list despite being hypoallergenic and coming in a variety of sizes.

Barack is definitely obsessed with not looking sissy, as witnessed when he totally went off on Barbara Walters and his own wife Michelle by braying on tv how they were most definitely *not* getting a "girly" dog...despite the fact that the dog was for his girls.
4/12/09, 6:25 PM

Unknown said...
I guess I am not "almost everyone." Thank you, Jill, for educating me about poodles being hypoallegenic. Really. I didn't know, and your answer was straightforward and polite. Normal, iow.

Oh, and Zee, I know you took your head out of your ass long enough to type that gratuitously nasty comment. You can stick it back up again. You're probably not used to the relatively unstinky air outside.

Oh, and this is hilarious. The last two letters of my word verification are FU.
4/13/09, 9:30 AM
Post a Comment
<< Home
Contact
Home
Email:
brilliantatbreakfast at gmail dot com
RSS