Brilliant Recent Posts
I can't help it...Wingnuts have unleashed my inner...
Heh. "Teabag Obama."
In which Chuck Todd remembers that he has a brain ...
Best. White. House. Photo. Ever.
What if they cried "OMG!! SOCIALISM!!!!" -- and n...
Oh. I thought for a minute Obama was hosting SAM...
Polarizing.
Well, what do you EXPECT from a network that think...
Around the Blogroll and Elsewhere: Special I Don'...
Harold and Kumar Go to the White House


Yes, we still need to be concerned about the theocrats
Posted by Jill | 8:25 AM 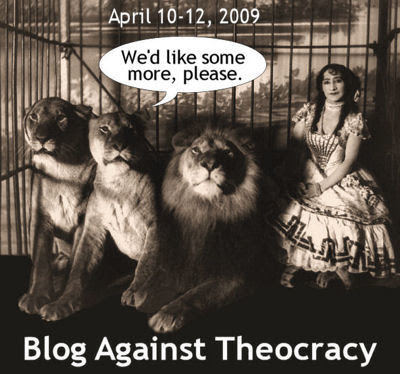 Sorry, but I simply had to choose this logo after watching the spellbinding documentary about YouTube sensation Christian the Lion on Animal Planet this week. (And yes, the most famous now-long-deceased lion in the world WAS so named as an ironic joke.)

But since this is both Blog Against Theocracy weekend, and also the culmination of an extremely bad week for the theocrats and their associated branches of wingnuttia, it's tempting to think that those who would turn this country into Jesusland have been defeated once and for all. They haven't.

There are millions of Christians in this country who attend church, believe Jesus is the literal son of God and was crucified and resurrected, and leave the rest of us alone. They recognize that religion is religion and government is government, and never the twain shall meet. This is how it should be. But let us not be lulled into thinking that the theocrats have run away with their tails tucked between their legs. And while it may seem discriminatory to focus on Christian theocrats, the fact of the matter is that there is no great Jewish movement to make gefilte fish the official food of America, and despite what Glenn Beck and the rest of the frothing gasbags of right wing hate radio might say, this country is NOT headed by some kind of secret Muslim Manchurian President appointed by the Jew George Soros (sic) to turn us into a Muslim caliphate. Nor is there any great Shinto or Hindu or Buddhist or Wiccan push in this country.

In fact, it is Barack Obama's very Christianity that makes him hardly the bulwark against theocracy that we might have wanted to see. Sarah Posner wrote this week about the skewing towards culture warriors on President Obama's Office of Faith-Based and Neighborhood Partnerships. Some of this is due to Obama's well-learned tendency to try to gracefully straddle two different worlds, but it's clear that Obama's outreach to culture is about more than playing nice, it's also colored by the worldview of his religious background.

I've never understood just why it is that Christianity requires such a high degree of groupthink. Despite what the creationists want us to believe, faith is just that -- faith. It's not based on reason, it's based on faith -- belief that something is true, not KNOWLEDGE that it is true. And that's perfectly all right, if that belief speaks to you in a meaningful way. But why, if the faith is so unshakeable, does Christianity require proseletyzing and conversion, often by force (or more likely today, by having lots of evangelical babies with which to stuff future ballot boxes, and the elimination of beliefs and practices that conflict with that faith? But that is the fundamental paradox of evangelical Christianity -- this notion that one's own religious freedom includes the right to force one's own religious beliefs and practices on the rest of the population, and that is why we will continue to fight it.

As little faith (heh) as I have in Barack Obama's ability or willingness to keep the religious barbarians at the gate at bay, I have even less faith in the people in the GOP who are lined up to try to kick him out of office in 2012. Bobby Jindal is a Catholic theocrat who claims to have performed an exorcism that sounds to the nonbeliever an awful lot like an attempted rape. Mitt Romney hasn't made any outright noises about Mormonism, but let's not forget that he belongs to a church that largely financed Proposition 8 in California, and that is so ruthless about forced conversion that it converts dead Holocaust victims. Newt Gingrich, perhaps unconvinced that simple faith in the divinity of Jesus and his resurrection is enough to buy him absolution for his checkered marital history at the ballot box, is converting to Roman Catholicism. Sarah Palin is perhaps the scariest theocrat of all, an adherent of a particularly aggressive Third Wave form of evangelism that is so utterly at odds with the founding principles of this country that no sane country would ever allow one of its advocated to high office.

It would be easy to comfort ourselves with this year's White House seder, or the decreasing focus of younger evangelicals on culture warrior issues like gay marriage and abortion. But the reality is that the GOP is assembling its army of Christian Soldiers to run to defeat Obama in 2012. 11-year-old kids are committing suicide because of homophobic bullying. Colorado culture warriors are fighting a bill explicitly designed to avoid the "abortifacient" argument about certain types of contraception after the defeat of Amendment 48 last year, which would have given full rights to fertilized eggs.

Newsweek proclaims The End of Christian America only six months after proclaiming the religious right reborn under Sarah Palin, and James Dobson concedes that gains by the movement are limited at best. But when you have a movement that is guided by simple belief alone, and one which requires constant affirmation by others that its beliefs are true, the wall of separation between not just one particular church and state, but between all churches and state; to render unto God that which is God's and render unto Caesar that which is Caesars, remains in peril.

Sherry Peyton said...
I agree with what you wrote. There is some reason to be hopeful that the religious right has lost its way, and no longer feels salvation will come from the GOP, but we must ever remain vigil. These crazies are intent on an agenda of forming the world to their liking. Believers like myself find them anathama and we intend to fight against this theocratic crowd. Thanks for a good post.
4/11/09, 11:46 AM

PurpleGirl said...
Good post. In reviewing history back to ancient regimes, it can be seen that spiritual leaders were also political/government leaders or religion was identified with the state (i.e. Egypt, Rome, early Christianity, Meso-America's Aztecs, etc.). The genius of our founding fathers was to continue the ideas of the Enlightenment to separate religious practice and government so as to avoid such things as the 30-years war and religious persecution. The theocrats want to return to the ancient idea that religion = state. I guess they get that from their (highly selective) "literal" reading of the Bible, forgetting that our founders had a different vision of statehood. We must be vigilant to prevent the theocrats from winning, at least during our life time.
4/11/09, 12:37 PM
Post a Comment
<< Home
Contact
Home
Email:
brilliantatbreakfast at gmail dot com
RSS