Brilliant Recent Posts
Set your DVRs, this is gonna be good
It all depends on what the meaning of "dangerous is"
Time to throw this motherf---er in jail
In case you thought what Chesley B. Sullenberger d...
Funny how no one thought of this while they were s...
Friday Cat Blogging
Meanwhile, out in the real world
Jews or Lose
OK, who put the horse's head in Judd Gregg's bed?
So cute you could plotz 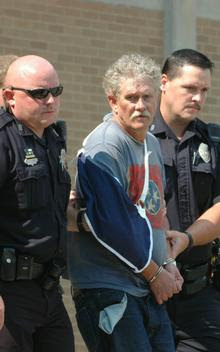 This is not a "manifesto." Why is the "liberal media" calling it this?

This "manifesto" by Jim David Adkisson, the right wing lunatic who opened fire on a Unitarian church in Tennessee last July 27th, is not so much of a manifesto (the word irresponsibly elevates it to the level of an accepted and legitimate agenda or movement) as much as it's the diary of a diseased and disintegrating human mind.

And Adkisson's conviction last week and the dissemination of his four page document had resurrected not this seven month-old story but the role the media should play and to what degree can someone yell "Fire!" in a crowded theater, whether or not the fire exists, before free speech has to be curtailed.

The right wing shudders at the thought of liberals such as us putting a muzzle that closes their slavering, snapping jaws. Their concerns aren't completely without merit: In a nation that is largely governed by the first amendment, which, among other things, guarantees or promises free speech, the proposition of censorship is every bit as explosive an issue as the theory of evolution, gay marriage and abortion. Yet we need to keep one very big reality in mind:

Adkisson freely admitted that his murders last July were a hate crime. Hate crimes, by their very legal and colloquial definition, isolate and victimize by persecution specific segments of society, whether they be gays and lesbians, feminists or, the broadest and most abstract segment, liberals and "leftists."

Hate crimes are a product of bigotry and intolerance, both of which are hallmarks, even defining characteristics of ultra conservative beliefs. Liberalism, by the very definition of that word, is all about free speech, tolerance and giving everyone a slice of the pie.

Right wing ideology, instead, preaches intolerance of a whole host of movements and philosophies, even to the point of further suppressing the free speech of liberals and then try to masquerade their intolerance as the exercising of responsible free speech.

Yet something, obviously, has to change even if it involves modifying the first amendment itself. Because as long as we continue wringing our hands and whining about how free speech supercedes all else, innocent people will continue dying by the hundreds if not the thousands at the hands of right wing ideologues who get their marching orders from cowardly hate mongers like Savage, O'Reilly and Hannity, cowards who then try to distance themselves from their self-appointed foot soldiers and even try to brand them as liberals.

So when the likes of Ann Coulter and Bill O'Reilly advocate using baseball bats when dealing with liberals, when people like Hal Turner openly call for the assassination of elected officials, when Melanie Morgan calls for the murder of anti-war activists, these people need to be held responsible for their words and the hate crimes for which they're obviously the catalyst.

The problem is deciding what is inflammatory. There's truly no accounting for how seriously a lone individual like Adkisson will respond to Bernie Goldberg's book. Thank heavens Adkisson is a nearly complete idiot and got himself caught as quickly as he did. In his "manifesto", he'd written that he wanted to kill all 100 people in Goldberg's book, a list that includes former presidents and vice presidents and Nobel Peace Prize winners.

Obviously, we need to be very careful when deciding what's inflammatory and violently provocative. But just as obviously, this trend needs to end. The first step is to stop calling screeds of blind, ignorant, murderous hatred "manifestos."
4 comments

jurassicpork said...
Man, check out the comments on the crosspost at my place. You're not gonna believe whose attention I'd attracted in short order.
2/14/09, 12:54 PM

Anonymous said...
There is a huge difference between the right to free speech (standing on the street corner on a soap box spouting nonsense) and hate speech given the blessing of network TV and paid millions of dollars to spout it.

Masses of people are still swayed by what they see on the TV. They take it in as legitimate. Power knows this. They know that he who controls the media controls the masses. That is why the right wing is so desperate to hang on to control.
2/14/09, 7:25 PM

Melina said...
...and at what point is this actually giving a platform to domestic terrorism?
Look also at Cesca on Limbaugh:
http://www.bobcesca.com/blog-archives/2009/02/epic_fail_3.html

If Limbaugh can spout this crap daily all over america and call it free speech then what recourse do we have?
I think its time to get to the sponsors of these shows and start major campaigns to stop them.

Melina said...
OMG JP!! What a nice bunch or readers you have....man oh man...
interesting in a removed anthropologic sorta way...in a human way, tragic for us all!
Keep up the good work and I would report the threats to the blogger police...they know what to do past that.
These people have too much time on their hands. Maybe they should be sentenced to some community service!
2/15/09, 10:08 AM
Post a Comment
<< Home
Contact
Home
Email:
brilliantatbreakfast at gmail dot com
RSS