Brilliant Recent Posts
Ladies and Gentlemen...
John McCain's "record of service" (sic) to Katrina...
Excuse me, Senator McCain, but the nomination isn'...
In other words, it's just a photo-op
Gustav, God, McCain, W, and Moore....
Bill Maher's New Rules for August 29th, 2008
The Goddess is VERY unhappy with the Palin selection
McCain is out of His Mind...Sarah Palin and the Fu...
I link, YOU decide
No wonder John McCain likes Sarah Palin


For Republicans, EVERYTHING is political
Posted by Jill | 8:29 AM
For all the lip service that John McCain is giving to "putting aside politics" this week out of "respect" for the people who are possibly going to lose their homes in Louisiana today, the Republicans are eager to spin a natural disaster as a boon for their own retention of power:

“You don’t wish for it, but it shows McCain dealing with a surprise — a big event that has consequences on people,” a convention planner said. “It’s redemption for the Republican Party on the competence issue. The convention ends up being about John McCain showing the best way to serve a cause greater than yourself.”

What this means is if the response is even one iota better than the response to Katrina (which it should be, given that Katrina was recently enough to still be a relatively fresh memory), the Republicans will want a freakin' medal for competence:

McCain and his new running mate, Alaska Gov. Sarah Palin, flew to Mississippi on Sunday to show they are on top of things. Back here, there is talk of convention-goers raising money for victims or putting together care packages for victims — a genuinely good gesture if they do it and probably good politics, too.

“This is McCain doing the right thing, showing leadership and taking command,” the convention planner said. “He’s deciding how to handle this, and Bush is irrelevant.” 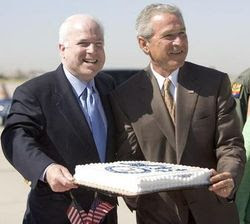 Well, too bad. Any idiot, especially a highly political animal like McCain, can learn from a blunder last time. But I wonder where this sense of service was three years ago.

Yup. A photo-op of making care packages shows how presidential he is. Talk about setting the bar low...

At Netroots Nation this year, conventioneers -- those very bloggers that the McCain campaign (and most of the media) disdains, took it upon themselves to make care packages for troops in Iraq and Afghanistan. And they did it without TV cameras around.