Brilliant Recent Posts
You too, Bill.
Nice. VERY nice.
Back-Pedaling We Can Believe In
If that's what's going on at MSNBC, I think these ...
Chris Matthews Rubber Room Watch, Day One
Gee, if she'd been like this during the primaries ...
Joe Scarborough Rubber Room Watch: Day One
Can't we find a role for this guy to play in the f...
Poor, Pitiful PUMAs
If the PUMA crazies were really about putting wome...


Meanwhile, in the Caribbean...
Posted by Jill | 10:24 PM
...Tropical Storm Gustav is weakened as it crosses Hispaniola, but the current storm track has it headed for the Gulf Coast -- the same coast devastated by Hurricane Katrina three years ago as George W. Bush and John McCain shared yuks while posing with a birthday cake for McCain that was then thrown away.

Here are the oil rigs located off the Gulf Coast of the U.S.: 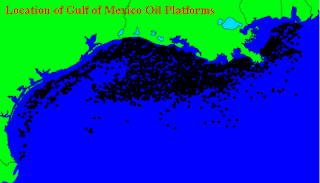 Here is John McCain lying about the damage done to these oil rigs during Hurricane Katrina:

And here is what really happened:

At the time, nobody was talking about what had happened to the 4,000 offshore oil platforms - and 34,000 miles of pipeline on the seafloor - when Katrina ripped through the Gulf as a Cat 5 storm, followed a few weeks later by Hurricane Rita. Attention was rightly focused on the unfolding human tragedy, as well as the 7-9 million gallons of oil spilled from damaged pipelines, refineries and storage tanks onshore.

But for months after the storms, officials from government and industry repeatedly claimed that there were no "significant" spills in the Gulf. That line is still heard even now. Yet in May 2006, the U.S. Minerals Management Service published their offshore damage assessment: 113 platforms totally destroyed, and - more importantly - 457 pipelines damaged, 101 of those major lines with 10" or larger diameter. At least 741,000 gallons were spilled from 124 reported sources (the Coast Guard calls anything over 100,000 gallons a "major" spill).
Wells and platforms were shut down before the storm, so leakage from those facilities was minimal. Pipelines were shut down too. But what the officials failed to mention is they don't require industry to "purge" pipelines before a severe storm - so they were probably still loaded with oil, gas or liquid gas condensate. Any section of pipeline that was breached leaked all of that product into the Gulf within hours of the storm. That's what we think accounts for the widespread slicks seen on the imagery from September 1 and 2, covering hundreds of square miles and obviously emanating from many points of origin. These slicks dispersed after several days of high winds offshore, as shown by our followup imagery taken on September 12, but a few problems remained as evidenced by ongoing leaks from wrecked platforms.

Here's what Jeff Masters at Weather Underground has to say about the potential of this storm (emphasis mine):

As we saw in 2005 with Katrina and Rita, the large amounts of deep, warm water brought into the Gulf of Mexico by the Loop Current can help intensify hurricanes to Category 5 intensity. As explained in my Loop Current tutorial, the Loop Current is an ocean current that transports warm Caribbean water through the Yucatan Channel between Cuba and Mexico. The current flows northward into the Gulf of Mexico, then loops southeastward through the Florida Keys. The Loop Current commonly bulges out in the northern Gulf of Mexico and sometimes will shed a clockwise rotating ring of warm water that separates from the main current. This ring of warm water slowly drifts west-southwestward towards Texas or Mexico at about 3-5 km per day. This feature is called a "Loop Current Ring", "Loop Current Eddy", or "Warm Core Ring", and can provide a key source of energy to fuel rapid intensification of hurricanes that cross the Gulf. The Loop Current itself can also fuel rapid intensification, such as happened with Hurricane Charley in 2004. When a Loop Current Eddy breaks off in the Gulf of Mexico at the height of hurricane season, it can lead to a dangerous situation where a vast reservoir of energy is available to any hurricane that might cross over. This occurred in 2005, when a Loop Current Eddy separated in July, just before Hurricane Katrina passed over and "bombed" into a Category 5 hurricane. The eddy remained in the Gulf and slowly drifted westward during September. Hurricane Rita passed over the same Loop Current Eddy three weeks after Katrina, and also explosively deepened to a Category 5 storm.

This year, we had another Loop Current Eddy break off in July. This eddy is now positioned due south of New Orleans (Figure 2), and this eddy has similar levels of heat energy to the 2005 eddy that powered Katrina and Rita. Should Gustav pass over or just to the left of this eddy, we can expect the storm to significantly intensify. There is also a weaker eddy present in the western Gulf; this eddy broke off from the Loop Current in April, and is much cooler then the eddy that broke off in July. Should Gustav pass over the April eddy, it shouldn't make much difference.

It's too early to predict what's going to happen with this storm. But next week, the Republicans will gather in St. Paul, Minnesota, and they will spend a great deal of time talking about how we have to drill off of every coast in the country RIGHT NOW. You won't hear a lot about renewable fuels, but you will hear a lot about drilling.

But this week, while all the talk is about people named Barack and Michelle and Joe and Hillary and Bill, there's a fellow named Gustav churning around in the Caribbean. He's sleeping now, but he has the potential to get very, very mean when he gets angry.

Barack Obama isn't the president yet; George W. Bush is. And the people of the Gulf Coast know all too well what happens when a storm hits on George W. Bush's watch. Last time, John McCain posed with George W. Bush and a prop cake while people drowned and oil rigs toppled. Let's see him talk about drilling with a straight face.

Charles D said...
You realize of course, that if there is significant damage to the offshore oil platforms and lots of environmental damage, the Repubs will say that's all the more reason we need to drill in ANWAR or give the poor oil companies more tax breaks. New facts only mean that they have to spin in another direction to get to the conclusions they have already made.
8/27/08, 11:46 PM
Post a Comment
<< Home
Contact
Home
Email:
brilliantatbreakfast at gmail dot com
RSS