Brilliant Recent Posts
McCain is out of His Mind...Sarah Palin and the Fu...
I link, YOU decide
No wonder John McCain likes Sarah Palin
Caturday/Dogurday Blogging
Friday Big Blue Smurf Blogging: What They Said
Wow...what a nitwit!
Bill Maher's Real Time Returns to HBO Tonight, Fri...
So now we will see what the Hillarions are made of
Friday Music Blogging: Special American "Pass-the...
Joe Scarborough Rubber Room watch: The Day After


The Goddess is VERY unhappy with the Palin selection
Posted by Jill | 5:28 PM 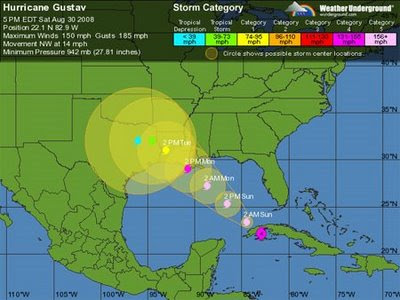 I wonder if there'll be a nice big cake for John McCain's birthday at the Republican Convention this year? And I wonder if they'll pose with it and throw it out -- just as they did last time.

If you are in the New Orleans area, listen to Jeff Masters:

It should go without saying that it's time to leave New Orleans. But, I'll say it anyway: It's Time to Leave New Orleans! The risk of staying in New Orleans is unacceptable. This is a huge and dangerous storm that has already killed a lot of people. The projected track and strength of Gustav is very close to that of Hurricane Betsy of 1965, the Category 3 hurricane that overwhelmed New Orleans' levees, and killed 76 people. Get out now.

Oh, and about that "no worries" hurricane-proof offshore oil drilling thing? What a shame to debunk that fairy tale right before the convention:

Crude-oil and natural-gas shipments from the Gulf of Mexico were curtailed and Valero Energy Corp., the largest U.S. refining company, cut production as Hurricane Gustav strengthened on a path to strike Louisiana within two days.

Oil producers halted at least 6.6 percent of output in the region, according to U.S. government figures issued yesterday. An update is due later today.

Gustav, now a Category 4 hurricane with winds of 145 (230 kilometers) per hour or more, picked up speed as it headed toward western Cuba and the U.S. Gulf Coast, the National Hurricane Center said in a bulletin. The storm was about 185 miles east of the western tip of Cuba at 11 a.m. New York time. A storm surge of 19 feet is possible at landfall in Cuba.

Gustav may strengthen before reaching the northern Gulf of Mexico in two days, the forecast said. Tropical-storm-force winds extend as far as 160 miles from the center.

Fields in the Gulf produce 1.3 million barrels a day of oil, about a quarter of U.S. production, and 7.4 billion cubic feet a day of natural gas, 14 percent of the total, government data show. Hurricane Katrina in 2005 closed 95 percent of regional offshore output and, along with Hurricane Rita, idled about 19 percent of U.S. refining capacity. Three parishes in Louisiana with refineries planned mandatory evacuations today.

And in case you're wondering what your president is doing:

The president called state leaders in Louisiana, Mississippi, Alabama and Texas in the early morning from the White House before heading out for a 90-minute bike ride, spokesman Scott Stanzel said.

Can't miss that bike ride, no sirree. But hey...he made a coupla phone calls. What else do you expect a president to do? No wonder John McCain thinks Sarah Palin is qualified to be president. Look at who's been doing the job for the last eight years.