Brilliant Recent Posts
If that's what's going on at MSNBC, I think these ...
Chris Matthews Rubber Room Watch, Day One
Gee, if she'd been like this during the primaries ...
Joe Scarborough Rubber Room Watch: Day One
Can't we find a role for this guy to play in the f...
Poor, Pitiful PUMAs
If the PUMA crazies were really about putting wome...
She's here, she's queer, get used to it, Joe.
I love this stuff
OK, I'll bite: Why should I pay for John McCain's...


Back-Pedaling We Can Believe In
Posted by jurassicpork | 8:49 PM
(Today's blog posting was written by the infamous Mike Flannigan. Mike, writing from Denver's convention floor [or "the killing floor of liberalism", as he put it in his email]. Mike works for an old and venerable liberal publication that shall remain nameless. The only reason his dispatch from the Great White West is appearing here in B@B and not his home pages is because, quoth Flannigan, his editor in chief, Ari Goldstein, "isn't quite the liberal he was when he provided fun fodder for a Life Magazine photo spread in 1968 when he pissed on a burning American flag. Ari can't do that anymore because of prostate issues."

Btw, don't tell Mike but in a few months he'll be going on a road trip all over the eastern seaboard and will chronicle his adventures in a first-person narrative called American Zen.) 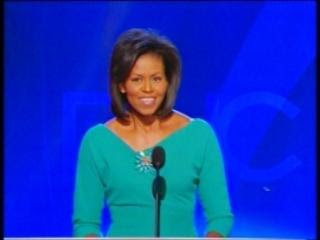 Fear And Loathing of Liberalism on the Campaign Trail '08, by Michael Flannigan.

The Pepsi Convention Center, Denver, CO --- The Choice of a New Generation, indeed.

To be sure, we won't be seeing as many idiotic senior moments in Denver as we'll play witness to in the miniseries version of the DSM IV in Minnesota next month (Just a limo ride from Larry Craig's abortive tap audition).

But the Democratic convention, that great American renewal of democracy that prefaces the debates and election with alcohol and cattle prods in elevators, as with the recently-dismantled dog and pony show of the Beijing Olympics, nevertheless has to be viewed in its true pink, white and perriwinkle blue colors.

We got an indication during this tightly-scripted and ruthlessly choreographed event when Michelle Obama had to tell America that she's proud of it, after all. Doing so, a naked repudiation of GOP talking points about the Obamas' patriotism, was the unspoken but final severing of any remaining ties with the Rev. Jeremiah Wright, who rightly said that the America of which she's now proud was founded on racism and terrorism.

Anyone who ever saw that episode of the Simpsons in which the Kennedy/Nixon debates were sponsored by Duff beer would've and should've seen in Budweiser heiress Cindy McCain's reaction Richard Nixon, after Kennedy, offering his own tepid and insincere endorsement of Duff. Within minutes of Michelle Obama's conveniently-timed resurrection of national pride, Cindy McCain, too, found God in a red, white and blue top hat and proclaimed her pride in a nation in which 99% of its population is poorer than her and 99.99% wouldn't be allowed within 100 yards of her.

Even more hideously-timed was the convention organizers' decision to pull Teddy Kennedy's foot out of his grave in Hyannisport , trotting him out to give America a last, misty-eyed, nostalgic glimpse of what Democratic liberalism used to look like.

Of course, what was gleefully elided over was the fact that Kennedy's own one candidacy for president, which was kick-started when Mommy Rose told him to run, was before the 1980 convention deader in the water than Mary Jo Kopechne.

Rather than stick a fat stake in the black heart of the Reagan era that is still very vigorously beating, they misjudged their aim by a foot to the left and impaled the barely-beating heart of the liberalism that gave us our greatest social triumphs of the 20th century.

As with the upcoming carnival of the cruel and stupid next month, everything so far has been scripted with Hollywood precision. There will be no give and take with Obama, the biggest talking head on TV this week who might as well be the animatronic bust in those fortune-telling machines along the boardwalks on Atlantic City or Coney Island (the GOP will be only too glad to supply the turban, I'm sure).

We'll turn on our tee vees, put in a quarter and get one open-ended fortune after another on a pristine card. Cha-ching!

"Change you can believe in!"

"Iran is a threat we need to deal with now."

"Social Security has a problem we need to deal with now."

But conventions are never press conferences and we're not permitted unscripted give and take. In this antithesis of the Town Hall meeting, we will be told only what the Powers That Want to Be want us to hear, to think what they want us to think. We will never be permitted to ask Obama why he's bowing and scraping to the Likud-controlled AIPAC and doing almost as good a job as Bush and Hillary Clinton on selling Iran as a WMD threat.

We'll also never be able to put his feet to the fire to ask him why, in spite of his well-publicized opposition to Iraq's invasion, he'd made statements that were conditionally supportive of said invasion (in other words, testing the political winds). I seem to recall, “There’s not that much difference between my position and George Bush’s position at this stage.” Then there was this gem: “We’ve got to do everything we can to stabilize the country to make it successful because we’ll have too much at stake in the Middle East.”

Instead, we'll see Obama, red, white and blue balloons and confetti raining on him, his arm around the waist of an old white guy who voted to go to war with Iraq, the Democratic ticket looking more and more like the Republican's with the sneakiness of the pigs and humans morphing into eachother at the end of Animal Farm.

Because McCain, too, has been BFF with another small state senior senator whose name is also Joe, one who also voted for the war as well as for cloture on the same bankruptcy bill that Biden not only voted for but helped midwife (surely not because his home state of Delaware holds the papers of incorporation of the same lenders who'd written the bankruptcy bill 8 years before it finally passed, could it? Say it ain't so, Joe!). That would be the same pimp stick of a bill that's currently making it more difficult for homeowners to dodge the specter of foreclosure.

And when Obama and Biden stand together, the age gap of 18 years will not only make Biden look older than Pompeii (or maybe even McCain) but Obama look like he's posing for pictures in his parents' driveway on prom night.

Because, as with his wife feeling it necessary to address and repudiate GOP talking points, Barack Obama will feel it necessary to do the same to the GOP talking point that he's too inexperienced in foreign affairs. Biden's very presence says not only, "I said the same thing about him, too, guys but what're ya gonna do?" but also, "I am a novice in foreign affairs despite my successful presidential road show and I need this old foreign policy wonk to help me navigate those dangerous waters."

Which is also to say that said old policy wonk, who was wildly non-catalytic to Democratic voters, will have a more active role in foreign policy than is appropriate for the OVPOTUS.

Which is what we're seeing now in the secret little shadow government/star chamber in the Naval Observatory.

The anointing of Biden from a purely electoral map standpoint makes no sense since Biden's standing in Delaware (the other Rhode Island) does not in the least help Obama's notably sagging support in the corn belt. From that viewpoint the most logical choice would've been Kansas Governor Kate Sibelius, a real liberal and a fighter who, as a true liberal Democrat, nonetheless was able to get herself elected chief executive of a state that's only slightly less backwards than pre-Cambrian Albania and latter-day Alabama.

Plus, putting a smart, accomplished lady on the ticket couldn't exactly hurt when fighting for the affections of Hillary supporters still baffled and furious that destiny, this one time, didn't favor their gal Hillary.

The Obama brand of liberalism is a merely bleached-out, nonthreatening form of liberalism that we need, a dead-center heading when we really need is a hard-to-port wrench on the wheel to get us back on our true course.

Obama's brand of liberalism is bland, safe, as mindful of Republican criticism as his colleagues in Congress, a shade of liberalism as comfortingly muted as the mulatto color of his own skin.
1 comments