Brilliant Recent Posts
The wave of the future (unless zoning ordinances g...
Oh, quit yer whining
Judging a Magazine By its Cover
If The Onion didn't exist, we'd all go insane
From the "Closing the Barn Door After the Horse Ru...
Sunday Movie Break: Great Scenes from Dumbass Mov...
Personal Bummer of the Week #1
I'd say just shoot me except that some wingnut lun...
And what difference does it make?
Adieu to the Court Jester...


Would somebody please remind Maureen Dowd that she is no longer in high school?
Posted by Jill | 6:48 AM
The New York Times' Amber Von Tussle is upset because Barack Obama isn't giving her enough snark material:

At first blush, it would seem to be a positive for Obama that he is hard to mock. But on second thought, is it another sign that he’s trying so hard to be perfect that it’s stultifying? Or that eight years of W. and Cheney have robbed Democratic voters of their sense of humor?

Certainly, as the potential first black president, and as a contender with tender experience, Obama must feel under strain to be serious.

But he does not want the “take” on him to become that he’s so tightly wrapped, overcalculated and circumspect that he can’t even allow anyone to make jokes about him, and that his supporters are so evangelical and eager for a champion to rescue America that their response to any razzing is a sanctimonious: Don’t mess with our messiah!

If Obama keeps being stingy with his quips and smiles, and if the dominant perception of him is that you can’t make jokes about him, it might infect his campaign with an airless quality. His humorlessness could spark humor.

On Tuesday, Andy Borowitz satirized on that subject. He said that Obama, sympathetic to comics’ attempts to find jokes to make about him, had put out a list of official ones, including this:

“A traveling salesman knocks on the door of a farmhouse, and much to his surprise, Barack Obama answers the door. The salesman says, ‘I was expecting the farmer’s daughter.’ Barack Obama replies, ‘She’s not here. The farm was foreclosed on because of subprime loans that are making a mockery of the American dream.’ ”

John McCain’s Don Rickles routines — “Thanks for the question, you little jerk” — can fall flat. But he seems like a guy who can be teased harmlessly. If Obama offers only eat-your-arugula chiding and chilly earnestness, he becomes an otherworldly type, not the regular guy he needs to be.

Because we all know just how important it is to be a "regular guy", right? After all, look around us at the country the regular guy that people wanted to have a beer with is leaving us. But if that's still the standard of qualification for the presidency, than I say we just cut to the chase and elect this guy: 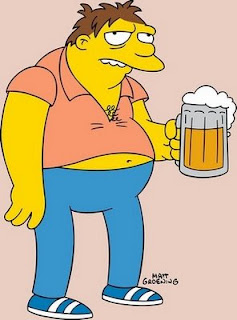 D. said...
The "Amber von Tussle" link goes to something that says "thief.gif" and doesn't open.

Current suspicion is that Ms. Dowd missed Camelot, has largely romanticized it, and doesn't realize that some of JFK's lines were written by Mort Sahl. (One of the occasional platitudes of comedy is that there isn't as much to satirize about Democrats because, while both groupings of politicians do stupid things, Republicans do more of them. [The obvious punchline here is: "Democrats are differently stupid." I'm trying not to be funny here.])

dguzman said...
Her column looks like something she wrote because she couldn't think of anything to write about. What a fecking idiot.
7/16/08, 3:50 PM

adam k. said...
That article is ridiculous on its face. Has she seen the Obama Girl videos? Has she seen Obama dance on Ellen? Does she see when Obama responds "I love you back" to screaming fans at his rallies? What about the rap reference at the rally where he did the "brush off" gesture and everyone erupted?

Is she really suggesting he's somehow more staid and prudish and unfunny than John McCain? The guy who called his wife a cunt and a trollop when she point out his thinning hair? Granted, that could've been a playful gesture by him, but the idea that that's what he'd consider "playful" is another issue.

The fact is that Obama's campaign has been the most fun, unpretentious, and youth-driven of any in our lifetime (and hence, probably ever). That's practically indisputable. All issues of candidates having to seem like regular shmucks aside, this article made its author look like a total idiot. It smacks of just trying to generate news and/or controversy by any means necessary. How pathetic.

adam k. said...
Not to mention that it's hard to blame the guy for being a little upset when he's here trying to put himself in a position where he'll have to keep this whole country from going down the toilet, and people are cracking jokes about his being a Muslim terrorist married to a female black panther. I mean, what's he supposed to do, laugh? He was very measured and chill in his response, really not uptight at all, but if she wanted him to say something like "shit, that cover was dope, dawg", well then, sorry. I guess that means he's an out-of-touch, uppity elitist with no sense of humor.

Anonymous said...
This is the kind of journalism produced by word quotas and deadlines.