Brilliant Recent Posts
If it's going to be wrecked anyway, let's party li...
Or what? Or we shall taunt you a second time?
But winning the war will magically take care of th...
Now all they need to do is learn to write a cohere...
Welcome Back Potter[sville]
John McCain gambles. Why does he never report any...
John McCain: Expert on gaming the system
What flip-flop?
Is this where Americans will FINALLY draw the line?
Meet Carly Fiorina, on the short list to be John M... 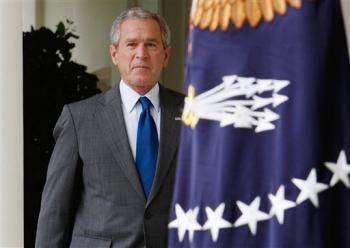 Whether trying to convey a tongue-in-cheek message, AP "journalist" Pamela Hess says it all in her headline: Senate bows to Bush, approves surveillance bill.

As a commoner would bow to a purple-draped, jewel encrusted head of a despotic monarchy.

As a man who knows that he will be killed and bows, scrapes and begs for a miraculous act of mercy from a smirking, capricious tyrant such as the petulant, temperamental sociopath pictured above.

As in bowing while bloodied and broken, neck bent as far downward as human physiology would allow and perhaps then some, all the while fooling oneself into thinking with some insanely stubborn and delusional resolve while looking at the ants and cigarette butts on the ground that, It's just a compromise, it's just a compromise, it's just Oh fuck, who am I fooling?! It's a capitulation!! Forgive me, dear voters, by voting for me in November and I promise to do better during my next term once a Democrat's in the Oval Office!

The Senate, predictably, followed the House and caved in to Bush faster than a Murray coal mine on the new FISA bill. Among the many "compromises": Retroactive immunity to the telecoms (hence to Bush and his shining legacy), thereby reducing over 40 lawsuits pending in a federal court to something about as valuable as Arbusto Energy stock.

Obama, making a show of resisting the bill, supported an amendment that would've stripped immunity from the bill then caved and supported the bill itself when the Republicans and some patriotic Democrats shot down the amendment faster than the Bolivian army shot down Butch and Sundance.

McCain didn't vote for the bill because he'd slipped the orderlies and was busy wandering through the Arizona desert ordering cacti and scorpions to invade Tehran.

Therefore, in a din of socket wrenches and screaming chimp mechanics earnestly at work, another sizable chunk of our democracy (meaning the Fourth Amendment) is dismantled. Once again, Russ Feingold stood on the right side of this issue, coming right out and saying that Bush "broke the law."

Which is true. Because if the telecoms were acting lawfully in eavesdropping on our overseas phone calls, then they wouldn't need retroactive immunity, now would they?

And, once again, the press drops the ball like a palsied but intrepid running back, insisting that Bush didn't start surveilling US calls until after the September 11, 2001 terrorist attcks. However, according to this well-sourced timeline, the NSA's habit of "inadvertantly" spying on US citizens (which it's legally forbidden to do) actually began back in the late 90's during Bill Clinton's semen-stained version of Camelot.

Furthermore, the sons and daughters of Winston Smith seem to conveniently forget that the NSA, at the behest of the incoming Bush administration, first approached the telecoms about spying on Americans as far back as February, 2001 (as proof of how rapidly our Fourth Estate springs into action and how much they benefit from the lightning-fast nanotechnology at their fingertips, this little detail wouldn't be made public for nearly six years, coming out in late 2006). Because, once again, it would've been fucking illegal for them to spy on us, which explains the need for proxies.

So, bottom line, the same Bush administration that Yeah-yeahed Richard Clarke when he'd tried to warn them about the terrorist threat from al Qaeda and other factions, nearly seven months before 9/11 immediately decided before Bush had even put pictures of his family and Pervez Musharraf behind his desk, to spy on American citizens. You know, since your Aunt Tessie in County Cork may be with the IRA.

Meanwhile, Bond, Kit Bond (R-Minitru), is hailing the measure as a boon to "terror-fighters."

Yes, Republicans are still actually channeling George W. Bush, a man who couldn't find oil in the middle of Texas or terrorists in the Middle East until they gave up trying to play hide-and-seek with him and found him, all the way down to his charming, Appalachian patois.

"Terror-fighters." Yes, he actually said that.

Grab ankles. Bite stick. Repeat as necessary and pray they use the KY next time.
5 comments

Anonymous said...
Never let the word 'Democracy' be spoken again. What little was left was just laid to rest. These people have proven true the old adage 'If voting actually changed anything, it wouldn't be allowed'.

pjs said...
The interesting thing is how quick the Obama true believers are in giving him a pass on this. Don't get me wrong - McCain as prez would be horrible. But those who voted against both cloture and the final version of this bill need to be applauded (and, yes, I am much chagrined to admit the Clinton is one of those few), and those who voted the other way need to be called out.

Anonymous said...
To hell with the toadies and sycophants. Vote them out of office regardless of your feelings towards them because they are a cancer on the country.
7/9/08, 9:57 PM