Brilliant Recent Posts
Or what? Or we shall taunt you a second time?
But winning the war will magically take care of th...
Now all they need to do is learn to write a cohere...
Welcome Back Potter[sville]
John McCain gambles. Why does he never report any...
John McCain: Expert on gaming the system
What flip-flop?
Is this where Americans will FINALLY draw the line?
Meet Carly Fiorina, on the short list to be John M...
Deep Thoughts and other brainstorms from the news 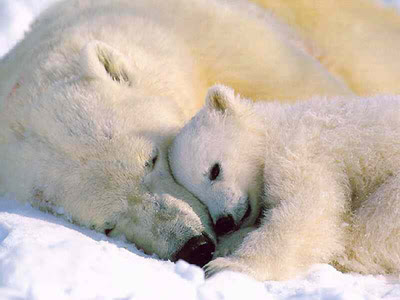 You're fucked anyway, so we're going to drill away

First the Bush Administration denied that global warming is a fact. Then they denied that our habits had anything to do with it. Now they've decided that since we're fucked anyway, why should the polar bears be any different? Their habitat is being destroyed, so there's no reason not to drill. Forget about trying to STOP their habitat from being destroyed, it's man the torpedoes and full speed ahead:

The lawsuit filed in U.S. District Court in Anchorage claims that federal officials violated laws designed to protect the animals and their sensitive habitat in the Arctic waters of the Chukchi Sea.

"These regulations set the parameters for how oil exploration will be done in the next five years," said Brendan Cummings, oceans program director at the Center for Biological Diversity, which filed the suit along with Pacific Environment. "The Chukchi Sea is critical habitat for those animals. For them to survive in the face of global warming, we simply cannot allow oil development there."

Last month, the U.S. Fish and Wildlife Service decided to grant legal protection to seven oil companies in the Chukchi over the next five years should they accidentally harm "small numbers" of polar bears or Pacific walruses while drilling or during other exploratory activities. The agency is named as a defendant in the suit, along with Interior Secretary Dirk Kempthorne.

Fish and Wildlife Service officials said oil and gas exploration will have a negligible effect on the bear and walrus populations. Global warming is most likely to cause the animals' numbers to dwindle, the agency said.

Fran said...
That mo-fo Cheney is glad. When he's finished eating babies for breakfast, he snacks on polar bear nuggets.

Global warming comes form multiple sources. The deniers, e.g. Bush, are starting to admit that global warming is occurring, but they are still denying it's fundamental causes.

Finally they admit global warming is real, just in time to suit their purposes.

Check out this new Obama Song. I can't stop singing it.