Brilliant Recent Posts
Just wonderin', is all
Yes we have no bananas
Please don't turn her into Cindy McCain
Black helicopters indeed
What on earth makes them think anyone would be int...
Bad to the bone
The American auto industry never learns
And so Willie is done
I guess he put down the bottle of Thunderbird long...
Our Very Own Numbers


what rough beast, its hour come round at last, / Slouches towards Bethlehem to be born?
Posted by Jill | 2:17 PM
It's a new internet meme, that's what! Behold and be present at the birth pangs.

And faster than you can say "Sweet Jesus I Hate Chris Matthews", a new meme is born: I Am Aware of All Internet Traditions.

UPDATE: Ah, what the hell: 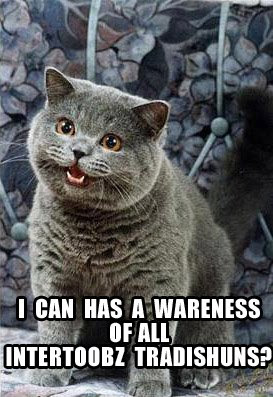 In 1934, Otlet sketched out plans for a global network of computers (or “electric telescopes,” as he called them) that would allow people to search and browse through millions of interlinked documents, images, audio and video files. He described how people would use the devices to send messages to one another, share files and even congregate in online social networks. He called the whole thing a “réseau,” which might be translated as “network” — or arguably, “web.”

Otlet’s vision hinged on the idea of a networked machine that joined documents using symbolic links. While that notion may seem obvious today, in 1934 it marked a conceptual breakthrough. “The hyperlink is one of the most underappreciated inventions of the last century,” Mr. Kelly said. “It will go down with radio in the pantheon of great inventions.”