Brilliant Recent Posts
In case you're pissed off at the court ruling abou...
And ten bucks says Ohio goes for McCain in Novembe...
Or perhaps not
The production values are getting better
The unaccountable lame-duck president
How a Republican Dirty Trickster nailed Eliot Spitzer
Monday Big Blue Smurf Blogging: What They Said
What the fuck is wrong with parents in Arkansas?
4000
Easterpalooza Eggstravaganza!

I still remember the morning when I first heard the news. I can still see my old white clock radio as it went off to get me up and off to school, the news radio station blaring the news about a murder in the town in which I lived, Westfield, New Jersey. It was early December, 1971, and I was a junior in high school.

At first I wasn't sure I heard correctly. That was in the days before 24 by 7 cable news. A case like this happening today and Jeremiah Wright would be gone from the airwaves. But then it was just a news report. It wasn't until I got to school and a girl I knew from the Westfield Drama Workshop grabbed my arm in the stairwell and looked at me in horror that it really hit me that what I'd heard that morning was true: Pat List was dead, along with the rest of her family -- killed by her father.

I'd been involved in the Workshop for about a year and a half at that point Pat and I hadn't been close friends, but that we were both in this theatre group gave me a certain amount of acceptability to the kind of kids that would have shunned me otherwise. Pat and I were in the same gym class that year, and she would talk to me about her boyfriend and we'd gossip about "the group." She was always nice to me in a way that pretty high school girls usually aren't to the short, overweight misfit with the sense of humor that no one really understands. You wouldn't know it from this ubiquitous family photograph, but Pat was by then a very sexy girl. I suppose her father knew this and it probably scared the shit out of him, as did her involvement in this drama workshop.

Most community theatre groups do lighthearted musicals, but not this one. This was a drama workshop led by someone who was teaching method acting to a bunch of suburban high school kids in between the kind of nonthreatening musicals that were the group's bread and butter. I had gone from being a spectator to a participant when I inherited the role of Mammy Yokum in L'il Abner from a friend whose mother (who ironically attended the same Lutheran church that the Lists did) refused to allow her to participate any longer. It wasn't exactly a method part, but I was a kid who wore her hair over her face and hid underneath a poncho every day, and I still remember the day I had to pull my hair back into a battle axe bun the first time, feeling like the French women I'd seen in a documentary on PBS having their heads shaved for collaborating with the Nazis. But the musicals were just there to pay the bills so that the group's leader, a frustrated opera singer named Edwin Illiano, whose name turned up later for accompanying the police to the gruesome discovery, could mount full-fledged productions of plays like A Streetcar Named Desire. 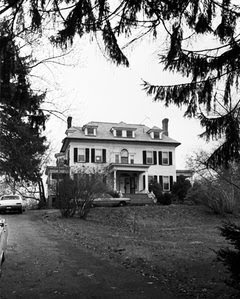 There was talk after the murders of Pat dabbling in the occult. I'd heard her talk about pentagrams and such a few times, and attended a Halloween party at the List home not three weeks before the murders took place; a party held in the very same ballroom where the bodies were found. I'd only been at the house once before, when we went to build scenery and their horrible pomeranian bit me. But I'd known that Mr. List was NOT happy at this bunch being in his house.

The only death I'd ever had to deal with was a grandfather with whom I wasn't close. So my first real exposure to death and funerals came with TV cameras outside the church and following us to the cemetery, a church with not one but five caskets at the front, and keening relatives. I remember that after the funeral, I took Valium for a few nights because I was terrified that if Mr. List had done this partly because Pat was involved in the drama workshop, he might come for the rest of us.

But time marches on. The drama workshop was disbanded shortly thereafter, probably due to the notoriety caused by the murders. I graduated high school, went to college, and went about my life. I've often thought about Pat over the years, and of course in my memory she is forever sixteen, strutting around a stage in a swimsuit as Stupefyin' Jones or whispering to me more information than I ever wanted about experimenting with sex with her boyfriend. I think about her swishing around the ballroom at her house in a nearly Elvira-like witch costume, mercifully unaware of how she would be laid out on a sleeping bag in that very room three weeks later. But as the years pass, those thoughts become less frequent.

I'll never forget where I was when I heard that John List had been apprehended after the case was profiled on America's Most Wanted. I was in the car, driving west on Route 4 in Teaneck. I whooped so loudly I nearly ran off the road. Finally, we were going to hear exactly why a man decided that killing his wife and children was the right thing to do.

In 2002, Connie Chung interviewed John List in one of the most chilling pieces of television I'd ever seen. He said, "It was my belief that if you kill yourself, you won't go to heaven So eventually, I got to the point where I felt that I could kill them, hopefully, they would go to heaven and then maybe I would have a chance to later confess my sins to God and get forgiveness.

"After I made the plan....It's just like D-Day, you go in, there's no stopping after you start."

In these days when we see so-called Christians attempt to justify just about anything, that this man who professed to be a devout Lutheran would find a way to make killing his wife, mother and three children, then going on the lam for eighteen years seem like a perfectly OK thing to do, no longer seems as shocking as it used to. But today, with many people in danger of losing their homes, one wonders if similar thoughts are lurking behind the placid exteriors of other fathers who find themselves out of work and unable to support the lifestyle to which their families have become accustomed.

John List got away with murder for eighteen years. He spent another seventeen years in prison, in the kind of ordered, neat and tidy world in which he probably thrived and probably felt comfortable. And now he has died -- on Good Friday no less -- in that place that was more haven than prison; gone off on the journey where he will find out if his beliefs were correct -- and if his God agrees with him that it's better to kill your children than let them play Stupefyin' Jones.

And now Pat and her brothers and mother and grandmother can finally rest. 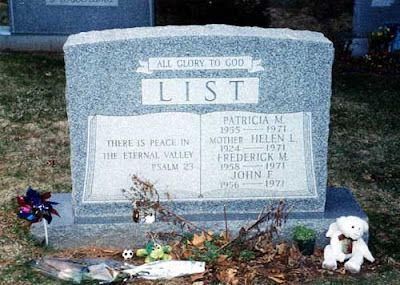 6/6/2022:  If you've clicked through from the "Father Wants Us Dead" podcast site, please note that I refused to share memories with the author of the article from which it was derived and will not respond to any emails again asking about it. I feel that after fifty years it is long past time to stop dredging this up and let these people finally rest.

Jersey Guy said...
One reads frequently that "writing what you know" brings out the best in anyone's writing. That applies in spades in this piece, Jill. Great work.

Anonymous said...
Sometimes, words completely fail me. As a news story, the List murders were never events one could make sense of, but this personal account makes it even worse.