Brilliant Recent Posts
Do we really want another clueless president?
One in Three Children Left Behind
John McCain's "Slip" is More than Just That...Its ...
Would someone please get the mainstream media laid...
Desperately seeking notebook PC < $1000. Thin and...
Video killed the radio star
Wednesday Big Blue Smurf Blogging: What They Said
Praisation by Faint Damns
The "Marlboro Man" speaks out
Five Years Ago


Let's see what happens when I give the kids hamantaschen on Halloween this year
Posted by Jill | 11:00 AM
In the world of willfully ignorant Republican Christians like John McCain, I guess Chanukkah is Jewish Christmas, Passover is Jewish Easter, and Purim is Jewish Halloween:

When McCain made a foreign policy gaffe in Jordan on Tuesday, it was Sen. Joe Lieberman who quietly pointed out the mistake, giving McCain an opportunity to correct himself in front of the international press corps. In Israel yesterday, NBC’s Lauren Appelbaum reports, Lieberman once again intervened when McCain made an incorrect reference about the Jewish holiday Purim -- by calling the holiday "their version of Halloween here."

McCain made the incorrect statement during a press conference with Defense Minister Ehud Barak after touring the Israeli city of Sderot to view buildings damaged by Hamas rocket fire. McCain was discussing the numerous rock attacks on the city. "Nine hundred rocket attacks in less than three months, an average of one every one to two hours. Obviously this puts an enormous and hard to understand strain on the people here, especially the children. As they celebrate their version of Halloween here, they are somewhere close to a 15-second warning, which is the amount of time they have from the time the rocket is launched to get to safety. That's not a way for people to live obviously."

Purim is not the equivalent of an Israeli Halloween, Appelbaum notes. The holiday -- although a joyous one -- commemorates a time when the Jewish people living in Persia were saved from mass execution. When Sen. Lieberman had a chance to speak at the press conference, he placed the blame of the mistake on himself. "I had a brief exchange with one of the mothers whose children was in there in a costume for Purim," Lieberman, who is Jewish and celebrates the holiday, said. "And it's my fault that I said to Senator McCain that this is the Israeli version of Halloween. It is in the sense because the kids dress up and it's a very happy holiday and actually it is in the sense that the sweets are very important of both holidays."

It doesn't matter if Lieberman is trying to be a good little Sancho Panza here for McCain's Don Quixote, not when McCain seems to NEED Lieberman to do his thinking for him. There's something so utterly clueless, so completely George W. Bush about this level of just plain stupidity, that makes the prospect of a McCain presidency even more depressing than it was before, and makes this image worth posting yet again: 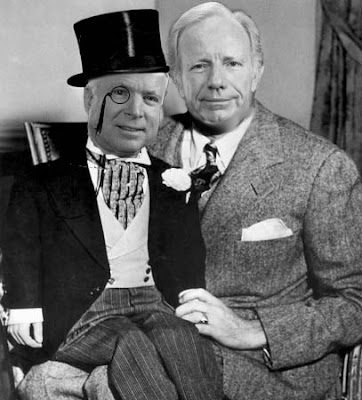 And yes, Harry Reid looks like a major league schmuck right about now.

Anonymous said...
No, no, no!
I swear that when I saw "Purim is Jewish Halloween", I knew that this was some sarcastic witticism of yours.

Anonymous said...
I am making the Lurch noise.