Brilliant Recent Posts
Thursday What They Said Blogging
Congratulations to Kate Harding!
All You Need To Know About the Resignation of Admi...
To resign, or not to resign?
Pocket Rocket Diplomacy
Crocuses, Daffodils and ....Bill Gates?
Incompetent? Or the stupidest woman on the face o...
They didn't stop the Total Information Awareness p...
Poo-etic Justice? You Decide.
Elliot Spitzer...Its Hard Out Here for a Pimp...


Another blogroll addition
Posted by Jill | 6:23 AM
I really should post every time I add a new blog to the blogroll, especially since, as you can see, I've added quite a few of late. But today I want to call your attention to our latest addition, Little Country Lost.

I've always been one of those people who fear death. We're talking sit-bolt-upright-in-the-middle-of-the-night-in-a-cold-sweat fear of death. Even after I shake off those occasional OMG WHAT IF THE CHRISTOFASCIST ZOMBIES ARE RIGHT?? thoughts, it still comes down to utter, complete, terror. Sort of like the kid in this 1986 Life in Hell cartoon: 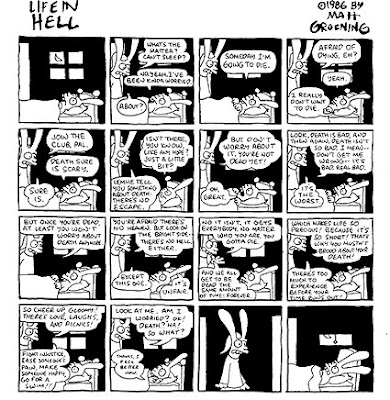 One of the side benefits of the perception that the world is going to hell in a handbasket is that the sense that you probably won't be around when it all goes to shit becomes a comfort as you get older. I'm not there yet, but I'm starting to understand that.

Of course the down side of this thinking is that it can make you a self-centered wretch, given the dark underbelly of this thought, which is "Why should I care? I'll be dead by then". This is a sentiment that has been verbalized by none other than George W. Bush, so it's something we want to avoid.

Still, it's hard, no matter how much you think you owe the next generation to give them as good a world to live in as you can, to continue to rail against the dark forces that have taken over our country when so much others -- those who have children and who have a more direct stake in the future than I do -- don't seem to give a shit. They're still buying the McMansions and guzzling $3.25 gasoline in their Ford Explorers and putting out seventeen bags of trash twice a week because they can't be bothered separating stuff out for recycling. It's hard to give young people any hope when you have none.

But if you're young and you have the guts and the wherewithall to do it, you can still just chuck it all and take off for Someplace Else to see what the world has to offer and if it's worth resettling in one of those Someplace Elses, rather than watch America completely collapse. I don't know if I'd have the guts even if I were young, given the kind of timid soul I was. But Jen Clark does, and I've added her blog to the blogroll today, partially because it's a good blog, and also to prod her to, as she promises, report from her great adventure.

Good luck, kids! I hope you find a place you want to settle and I hope you have a fantastic time. Just please try not to be too smug about those of us who are stuck here. Though I couldn't blame you if you were.

Jennifer Briney said...
Jill- thanks for the add and the kind words. For the first time in my life, I have no doubts that I'm making the right decision. There is a good chance that I'll come back if the country ends up steering itself back in the right direction - after all, with all its faults, the United States is my home - but I'm still going to be prepared if the Bush nightmare continues.

Good luck to you here. I'm so sorry to hear that your retirement savings is disappearing. I know how difficult it is to save. Hopefully, enough other people are starting to wake up and something drastic will be done about it.

If there's one good thing about the Bush administration, it's that subtlety was not their strong-suit. They are so obvious in their arrogance and corruption and failures that even the most dedicated Republican must take notice. It's ironic, but in their bad intentions and incompetence is where my hopes lay.

The key is waking others up. If nothing else, we can rest easy that we are doing something to further that cause
3/13/08, 2:32 PM
Post a Comment
<< Home
Contact
Home
Email:
brilliantatbreakfast at gmail dot com
RSS