Brilliant Recent Posts
Thankful for kittehs
The Return of the Zombie Missing White Women
Onward Christian Soldiers
Well, I guess that's the end of it then
Who says you have to make that big hormone-laden b...
Why not just say "He's a schmuck, but he's our sch...
Oh, shit.
Around the blogroll and elsewhere: icepick, meet ...
So now we know. Now what?
I've Been Twittered, God Help Me! Micro-Blogging f... 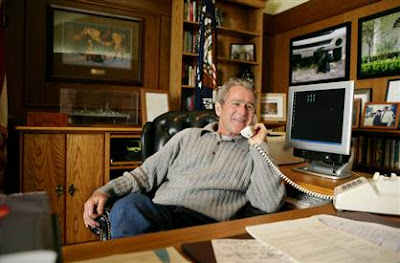 How Captain AWOL supports the troops on Thanksgiving

He's really good at giving the troops "the least he can do":

President Bush, who visited troops in Iraq on Thanksgiving after the U.S. invasion in 2003, called several servicemen and women Thursday to extend best wishes and say it was “the least I can do.”

Three of those receiving holiday greetings are in the Army, two are Marines, three are in the Air Force, two serve in the Coast Guard and two in the Navy. The troops called are serving in Iraq, Afghanistan and aboard ship, said White House press secretary Dana Perino.

The president asked for God’s blessings on the members of the military, Perino said. He said he was thankful to be commander in chief of the finest military ever assembled and told them, “calling you is the least I can do because I admire the military so much.”

The president was celebrating the holiday at Camp David with his wife, Laura, and their twin daughters, who have a birthday this weekend. Also present were daughter Jenna’s husband-to-be Henry Hager, some of the president’s brothers and sisters with their families, and Secretary of State Condoleezza Rice.

Isn't it nice that the Bush family was able to get together today with all their children and their children's spouses and intendeds -- and not one of them is in Iraq today? Because after all, real patriotic Americans don't do the dirty work of fighting, right? They make show phone calls while the baby brides and the children who don't remember what their fathers look like and the parents who worry that their son won't get back from his third deployment alive eat their turkeys and try to pretend their lives are normal.