Brilliant Recent Posts
Nope. No bias here.
Around the blogroll and elsewhere: Republican Deb...
Financial Doomsday watch for Thursday, November 29
What constitutes "expressing discontent"?
If we had anything resembling news media, this wou...
A post you MUST read
TRex leaves the nest
When the spouses are more interesting than the can...
Financial Doomsday Watch for Tuesday, November 28,...
And this is only the beginning 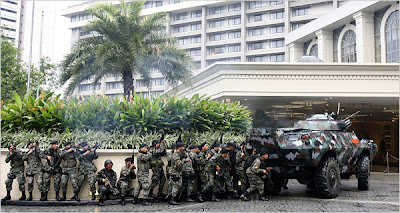 This is a post about media accuracy. Let me begin by saying Agence France-Presse is one of the most accurate sources out there...usually.

I happen to have inside information on this one.

Let's start with the headline. It was the police SWAT (Special Weapons And Tactics) and not the army who raided the building. The army had provided a large number of personnel, but they were there if needed and they weren't.

Philippine troops stormed a Manila hotel [It was in Makati City. It's joined at the hip with, but separate from, Manila.] in a flurry of gunfire [The bursts of gunfire happened before any police officer entered and came from inside the building.] and tear gas Thursday, forcing the surrender of a band of renegade soldiers [I don't believe a Catholic priest and cardinal would be described as "renegade soldiers". The 30 people mentioned included many non-military supporters.] who were demanding that President Gloria Arroyo step down.

The rebels, who seized and occupied a luxury hotel [The rebels did not seize and occupy a luxury hotel. They occupied a second floor functions room.] to drive home their criticisms of the Arroyo government, gave themselves up after a dramatic confrontation broadcast live on television screens around the world.

So they got only a few things wrong, but we bloggers are suspect at all times.

The real story isn't quite as dramatic as "renegade soldiers" occupying a luxury hotel and the army bursting in under heavy gunfire.

Note: The picture is great. It shows an armoured personnel carrier the same as the one which is, at this point, in the hotel lobby. And if you look in front of the palm tree you can see the tear gas smoke floating out of the lobby. At this point the police have entered the building. The army personnel are just laying back if needed.